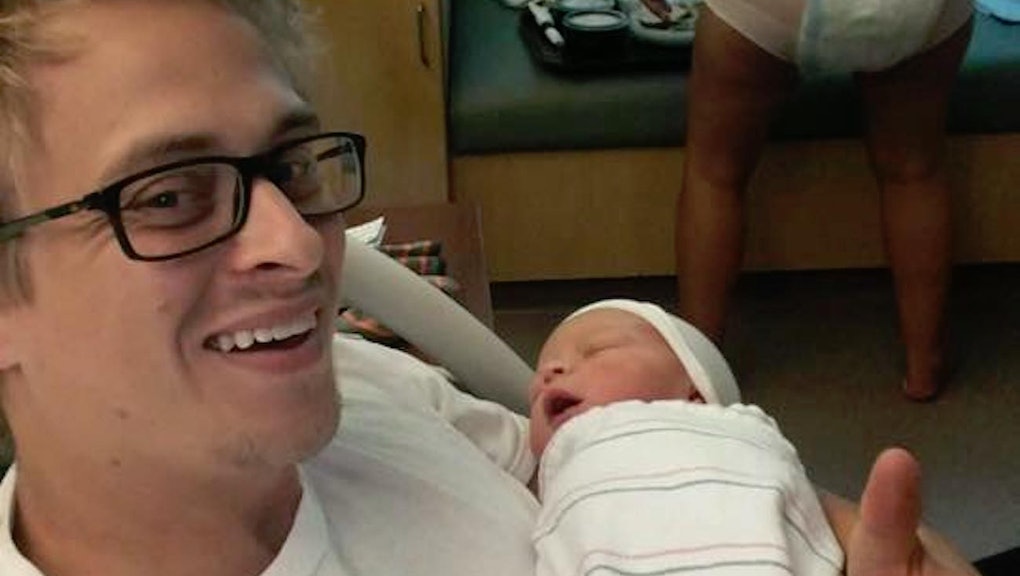 With all the hype about "post-baby bodies" and the bliss of new motherhood, it can be easy to forget that childbirth is a physically grueling (and messy) process — in fact, one recent study compared the physical effects of birth to running a marathon. That's why new mom Amanda Bacon decided to post a photo on Facebook showing "real" motherhood.

The photo, taken by Bacon's husband, Ken, shows him holding their newborn son Pierson — while Bacon stands in the background wearing nothing but underwear and a giant pad. It is, as she says in the Facebook post, "raw, stunning, messy and freaking hilarious all rolled into one."

In a post on her motherhood blog, Bacon explains that she had no idea that her husband was even taking a photo of her: "When Ken snapped that picture of myself standing in all of my mesh diaper glory, I had no clue he took it. I was too busy shoving Fudge Rounds in my mouth to even notice, or care."

And at first, seeing it made her feel kind of, well, uncomfortable. But then, she explains on her blog, "My feelings towards that picture started pissing me off! Why? Why was I feeling so awkward over it?" So Bacon decided to post it on her Facebook page, as a way of challenging her own insecurities and to show other new moms that postpartum messiness is normal.

Why feel ashamed over something that's normal? Why the hell not post it? If I can make a difference in someone else's journey into motherhood, then I'd be happy.  If one less woman feels ashamed or embarrassed or nervous about what happens after they give birth, then that's a frickin' win! No one talks about the dictionary-size pad, the mesh panties, the postpartum bleeding, but we should. I wanted to give new moms a low down of what's to come, and let other moms know to remember to smile and enjoy every aspect of child birth.

It's clear that Bacon's message resonated with lots of people — since she posted the photo on July 6, it's been shared more than 126,000 times — and it's even encouraged other new moms to post their "uncensored" photos of motherhood in the comments.