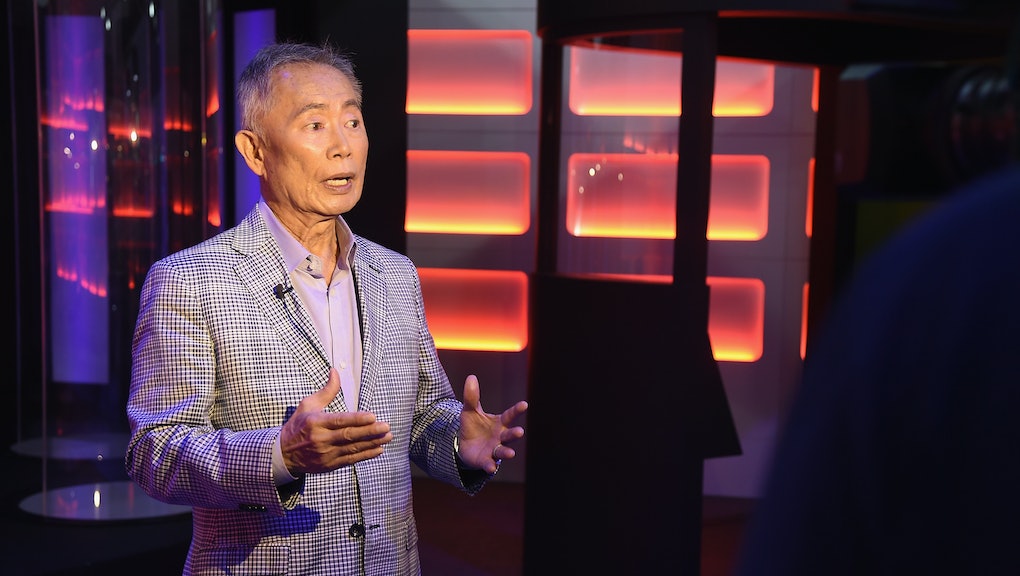 George Takei is begging you: Please learn from the past, or you'll be doomed to repeat it. In a video posted to Facebook, the Star Trek actor spoke directly to his Spanish-speaking fans, imploring them not to dismiss Donald Trump's racist, "dehumanizing" rhetoric — Takei has heard it before, in another context with dangerous implications.

"Many don't know that I speak and understand Spanish," Takei captioned the post. "In fact, I grew up with many Mexican-American neighbors in L.A. This message, regarding my own personal experience with racial demonization, is addressed in Spanish to my Latino fans and their families and friends. I hope I did the language justice."

The Star Trek actor recalled how, during World War II, he and his family members were sent to one of the Japanese internment camps Trump once said he maybe would've supported. "When I was a little boy, politicians used fear and racism against people of Japanese descent in this country," he said. "We were targets simply because we happened to look like the people who bombed Pearl Harbor."

"When Trump today says Mexicans are rapists and drug dealers, it is his way of similarly dehumanizing whole groups, so that he can set his plans in motion," Takei continued.

Takei often takes a humorous angle when speaking out against Trump. Not so in Wednesday's video. He recalled how he was among some 120,000 Japanese-Americans to be forced out of their homes after the U.S. formally joined World War II, forced to leave their possessions and daily lives behinds, and forced into makeshift camps for years.

"Back then, they simply said, 'A Jap is a Jap,' and we lost our homes and freedom, even though two-thirds of us were U.S. citizens," Takei continued, drawing a parallel with Trump's assertion that "'a Mexican is a Mexican.'"

"He is playing on the same fear and ignorance that once led this country to intern my family," Takei said, imploring Latinos to register to vote and cast their ballots against him, especially in key swing states. "Donald Trump is a dangerous man, but your votes can ensure he never comes to power, and history does not repeat."

The message seems to have landed: At time of writing, the video had over 4,000 comments and more than 3 million views.