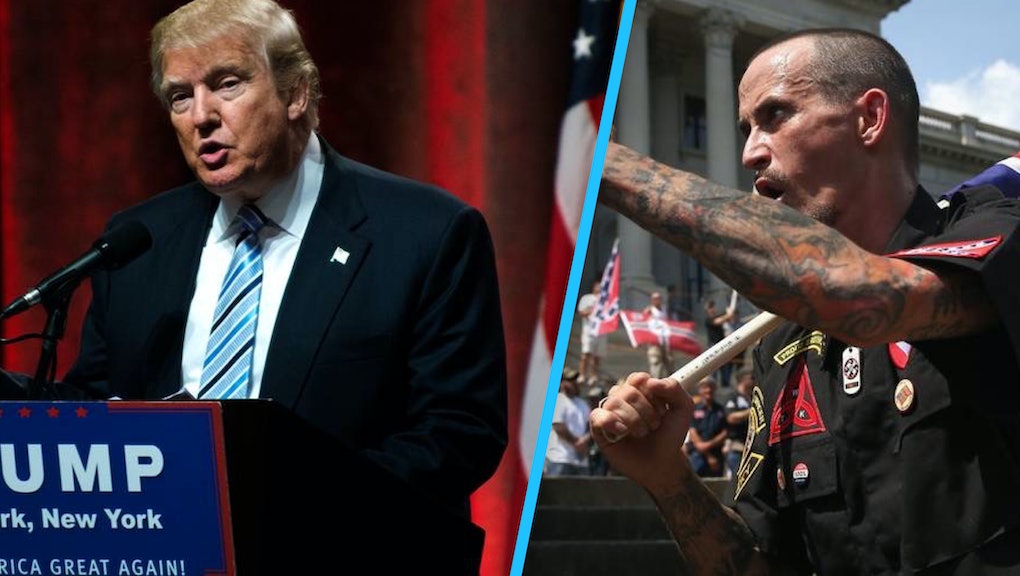 On Tuesday night, Donald Trump became the official Republican nominee for president of the United States. It's the best thing to happen to the KKK since domesticated horses.

"Trump is espousing the ideals we've been promoting for years," said Thomas Robb, who took over for David Duke as national director of the Knights of the Ku Klux Klan in the 1980s. "They're talking about [these ideals] at the Republican National Convention. It makes our position credible."

Since its heyday in the late 1800s, the Ku Klux Klan has splintered into 33 smaller groups that coordinate little with each other. But these groups have found a unified voice, and a second wind, in the Trump candidacy, which has championed banning Muslims from immigrating to the U.S. and building a wall to keep out Mexican immigrants. On a battlefield where white supremacy was losing, Trump gave the movement new firepower.

"Unless it's a rally or a KKK banner, we're easily ignored," Robb said. White supremacists "have never had a voice for the anger before, and Trump is tapping into that voice."

Given how atomized the white supremacist movement has become, it is hard to gauge its strength in the U.S. But in the last four or five months, Robb noticed an uptick in calls to the Knights' office in Arkansas. Requests for copies of the Klan's newspaper, the Crusader — a quarterly publication that calls itself "The Political Voice of White Christian America!" — has skyrocketed. The renewed interest in white nationalism, Robb said, is partly thanks to Trump's visibility.

The Trump campaign did not respond to Mic's request for comment. But this isn't the first time the GOP nominee has received support from prominent figures of the white power or nationalist movement. In February, David Duke, one-time Republican Louisiana State Representative and a former KKK Grand Wizard, called Trump "our white knight." Duke added that it's "treason to your heritage" not to vote Trump.

When the Anti-Defamation League called on Trump to disavow Duke's support, the Republican presidential hopeful fumbled, saying he wouldn't condemn a group, even a white supremacist group, before researching it. "Well I'd have to look at the group," he said. Trump later denounced Duke and the KKK, saying he'd disavowed Duke numerous times in the past — which is bizarre, since he claimed he'd never heard of Duke before.

According to Robb, Trump's "fixes" for problems were preaching to a long-quiet choir. In June, Trump called for outlawing immigrants from places with histories of terrorism. In December, he recommended banning Muslims from entering the U.S. And in order to keep people from immigrating into the country, the first point of his proposed immigration reform calls for a wall along the Mexican border — a wall he believes Mexico should pay for.

"We called for the border wall 30 years ago," Robb said. "We never expected someone so outspoken on issues of immigration."

Trump took what he believed to be the whispered ideals of the Every American and put them up to a megaphone. And from his office in Arkansas, Robb watches the white power movement grow.

"I've been a part of this Traditional America movement since I was a teenager," Robb said. "And I've never been more encouraged in the last 50 years than I've been in the past year and a half. ... I don't like to use the word radicalize, but I believe that Trump will advance the narrative."