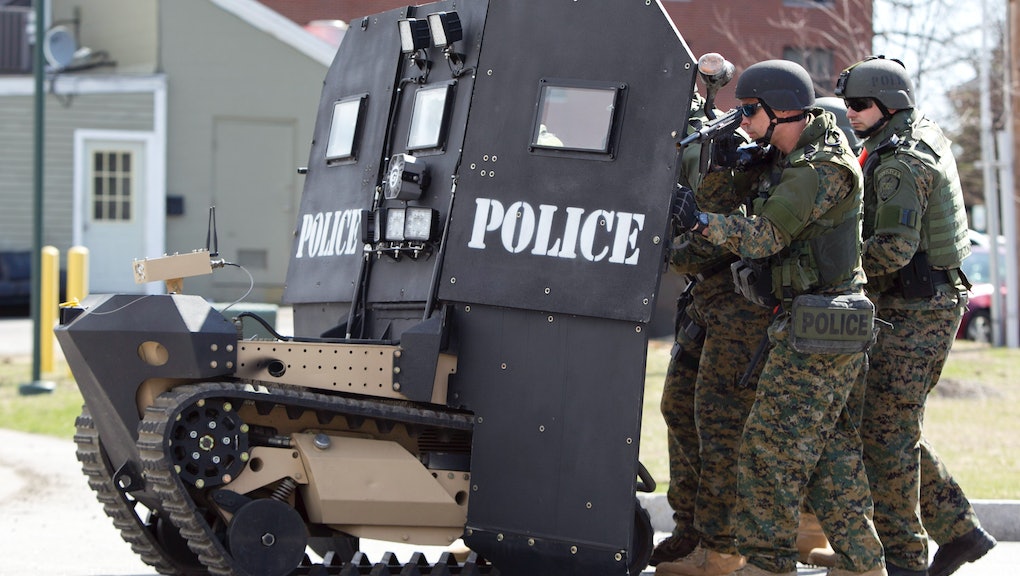 Police Robots Could Save Black Lives and Blue Lives, If We Weren't So Afraid of Them

Earlier this month in Dallas, a sniper killed five officers and injured nine others before he was cornered in a parking garage. Instead of putting bodies in the way of harm, police strapped a bomb to a MarkV-A1 bomb disposal robot and drove it with a remote control. Once the robot arrived, it detonated an explosive, killing the sniper.

"The only way to get a sniper shot, to end his trying to kill us, would be to expose officers to great danger," Brown said on CNN afterward.

It appears to be America's first great example of using an armed robot to avoid putting police officers in danger. Police analysts say that national grants are bringing ever more robotics into police departments across America, causing ethicists to worry about a future with more ubiquitous surveillance and automated killing machines. But if we used robots regularly to remove police bodies from tense situations, it could protect not just police officers, but bystanders.

"If an officer goes into a room and there's an armed adversary, he has no choice except to shoot," said Sean Bielat, a former marine and CEO of Endeavor Robotics, a company that manufactures robots for the military and police departments. "By adding time and space between the operator, you've introduced an element that can potentially reduce casualties."

Bielat used a provocative example. In Minnesota in early June, a police officer killed black man Philando Castile during a traffic stop after Castile said he was lawfully carrying a registered firearm. In video of the incident taken by Castile's girlfriend, the officer is appears nervous.

"Fuck," he yells repeatedly as the victim lies bloodied in the driver's seat.

It's unclear if the reason the officer fired was because he was nervous, but even routine traffic stops can increase an officer's adrenaline and anxiety. The fear of immediate harm, real or perceived, can hamper decision-making and lead to snap judgement about lethal use of force.

An operator who sent a slow-moving, unarmed robot in his or her stead would be less likely to act on impulse out of fear. Officers projecting their presence through a robot could carry on a conversation, or even manage a hostile encounter, without threat to their own body.

"The more we get robots into a dangerous situation instead of a person, the better off outcomes will be," Bielat said.

Robots have already begun their entry into police work. In 2014, police in Grand Forks, North Dakota, used flying drones to chase four men through a cornfield who were suspected of drunk driving. In one instance last year in San Jose, police used a robot to deliver a pizza to a man threatening suicide on an overpass. In another case, a bomb disposal robot helped negotiators through a potentially deadly standoff in a quiet Canadian neighborhood without anyone needing to fire a weapon.

And then there are the futuristic possibilities for robots that we already have on manufacturing assembly lines, but haven't put to use. Flying quadcopters could be used to scope out a scene or evaluate fires and disasters from hard-to-reach vantage points. Bulky search and rescue bots could be used to extract the injured from dangerous situations, or protect a prone officer by acting as a shield.

But according to some ethicists, there is a world of difference between robots that perform traffic stops and give police birds-eye views, and robots that kill. Those who are worried about the slippery slope toward self-governing killer robots argue that once we remove police bodies from a situation, robots will allow officers to use force without empathy.

Yale University's Wendell Wallach — the author of A Dangerous Master: How to Keep Technology from Slipping Beyond Our Control, a policy-heavy primer on the crisis posed by giving armed robots and software agency in decisions about lethal force — said the Dallas incident was inevitable, and that it might be the moment where we "crossed the rubicon" into a world in which robotics using lethal force is normalized.

"We can't use justifiable examples like this to become precedents for unjustifiable actions later," Wallach said. "Next time around, it could be blowing someone up, because it would cost the city too much money to wait out a hostage taker."

"The more we get robots into a dangerous situation instead of a person, the better off outcomes will be."

Another concern in the Dallas case is that a remote-controlled killer robot resembles our assassination-based drone program overseas, according to Ken Williams, a former homicide detective who speaks publicly about police reform and use of force. A police officer can use deadly force and is trained to aim for the center of the targets mass when firing a weapon, but the aim isn't explicitly to kill. Williams worries that by introducing a more sophisticated, targeted weapon like a remote-controlled robot, it means police are more able to make cold, advanced decisions about who lives or dies.

As Cornell University's Sarah Kreps pointed out to Mic over the phone, these fears are causing police and military alike from deploying these systems.

When Seattle residents found out the Seattle Police Department had two small drones, the public backlash forced the department to shunt them off on the Los Angeles Police Department. LAPD won't use the drones for the same reason as Seattle: public outcry.

"Technophobia can distort a rational reading of an incident," Kreps said. "So people who are using this technology know they have a great incentive to use it properly, because the last thing they want is that they use the robot to kill the wrong person."

"You'll never find a policy manual where it says you're authorized to kill."

But the trouble with getting these gadget into the hands of police, largely, is paying for it. The robot used in Dallas was worth about $100,000, and is typically available only if a city is large enough to warrant a bomb squad. Endeavor Robotics' cheapest robot, a rugged little 5 lb. robot with cameras and a microphone that can be thrown through windows, costs about $19,000. Trying to purchase just one in a small city's police budget is a headline-making event.

"The demand is much greater than the ability to pay for the robots," Bielat said. "Budgets are tight, and these are expensive pieces of technology. That's the primary limitation."

But police budgets are also responsive to popular demand, and as long as police robots are seen more as a threat than a way to mitigate harm to both police and the people they serve, the number-one barrier in adopting the use of robots in police work could be the public's dystopian imagination.