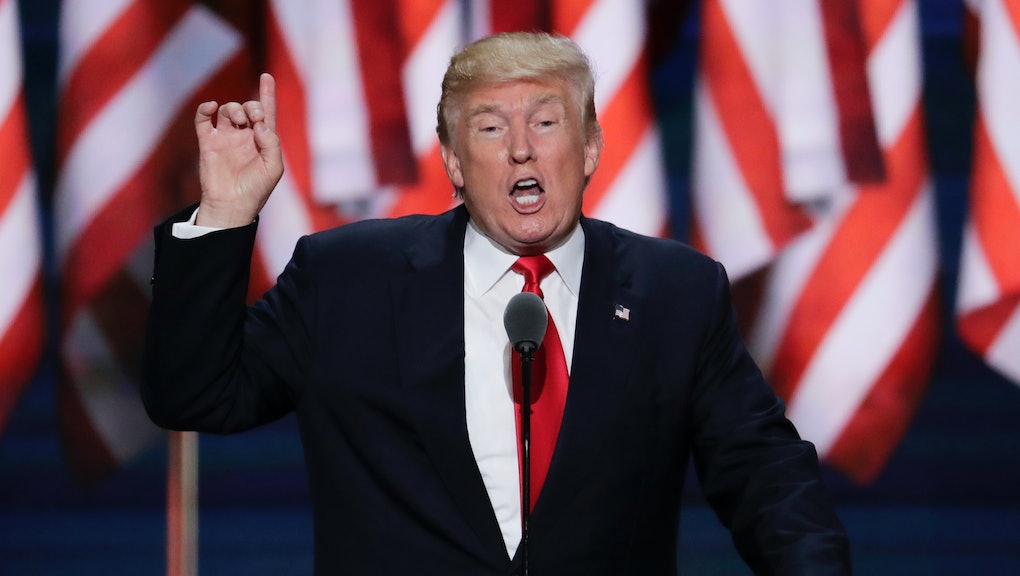 CLEVELAND — Chaos and controversy marred its start, setting the tone for the tumult to follow. But just when the march of events seemed to trample over Donald Trump, the tycoon-cum-showman shattered soothsayers' forecasts of utter catastrophe.

Yes — the Republican National Convention here served as an especially apt metaphor for the trajectory, so far, of Trump's improbable campaign for the presidency.

Launching his bid on June 16, 2015, Trump offered himself as a business-minded Mr. Fix-It for a country convulsed by populist angst over stagnant wages and a sclerotic political system. But Trump's big day was overshadowed by his remarks lashing out at Mexican "rapists" pouring across the United States' southern border — sparking a spate of companies to sever ties with Trump, whom many speculated had entered the race simply to boost his business brand.

But Trump withstood the controversy — and went on to see through blowups over his attacks on John McCain's war record, Megyn Kelly's menstrual cycle, Carly Fiorina's appearance, a New York Times reporter's disability, and ... you get the idea.

Despite a series of blunders that would likely have proven fatal for a conventional presidential candidate, Trump steamrolled over his 16 GOP opponents by tapping into the visceral anger of the party's base.

Formally accepting the GOP nomination here on Thursday after daughter Ivanka introduced him as a gender equality pioneer, Trump once more showed an ability to save face after a series of unfortunate, and politically embarrassing, events — from the firestorm surrounding Melania Trump's plagiarized speech to the convention-floor rancor as vanquished rival Ted Cruz refused to endorse Trump.

Reset? Though Trump read his remarks from a teleprompter — a break from his usual extemporaneous style — the speech was quintessentially Trump: Boisterous, plain-spoken and often ominous.

"If you want to hear the corporate spin, the carefully crafted lies and the media myths, the Democrats are holding their convention next week," Trump said near the speech's outset, punching at the economic, media and political elites who've drawn populist scorn. "But here, at our convention, there will be no lies. We will honor the American people with the truth, and nothing else."

To each point, there are a plethora of well founded objections.

Violent crime may have ticked up in many cities across the nation in recent years, but it's nowhere near the historic highs of the late 20th century. The unemployment rate has plunged to 4.9%, down from 10% in October 2009. Trump may assert that the country has become a laughingstock, but global approval of the United States has soared in the Obama years, recovering from its Bush-era lows.

That's not what matters to Trump's supporters — or even to many Americans who've yet to back the GOP standard-bearer.

They see a country riven by racial tension and clashes over policing and where the median worker hasn't seen a raise since the Great Recession. They see a world traumatized by Islamic State-linked terror attacks, with French Prime Minister Manuel Valls saying "we should learn to live with terrorism."

Outreach: Disillusionment with this state of affairs transcends ideological lines, as Trump himself acknowledged Thursday in reaching out to supporters of Bernie Sanders.

At times, Trump sounded like the Vermont socialist himself.

"When innocent people suffer, because our political system lacks the will, or the courage, or the basic decency to enforce our laws – or worse still, has sold out to some corporate lobbyist for cash – I am not able to look the other way," he declared.

Echoing Sanders' attacks on Hillary Clinton, now the presumptive Democratic nominee, Trump said, "Big business, elite media and major donors are lining up behind the campaign of my opponent because they know she will keep our rigged system in place."

Trump promised to blow up that system, scrapping trade deals he views as insufficiently pro-worker and guiding his presidency by the principles of "Americanism, not globalism."

"It's so important to have fundamental change in Washington, D.C. He's the only one who's going to bring it there," ex-campaign manager Corey Lewandowski told Mic, before Trump spoke but after his prepared remarks had leaked.

Even as he served the right-wing base no shortage of red meat on immigration, taxes and Clinton's character, Trump parted from many of the convention's headliners in making explicit appeals to Democrats and those who don't typically vote Republican (and whom polls suggest aren't keen to do so this time).

"Every action I take, I will ask myself: does this make life better for young Americans in Baltimore, in Chicago, in Detroit, in Ferguson who have, really, the same right, folks, to live out their dreams as any other child America?" Trump said, to raucous applause inside the Quicken Loans Arena here.

The Trump show: Though the heated floor fight over the convention's rules, the coverage of Melania Trump's lifted speech passages and Cruz's refusal to back Trump made this far from a seamless convention, this was fundamentally Donald Trump's show. His task Thursday night: To retake control of the convention, rev up his foot soldiers and begin to broaden his general election appeal.

The reception to his speech left little doubt that he had succeeded in the first two tasks — and his rhetoric may lead to progress on the third.

Of course, it's too soon to pronounce him Teflon Trump. The obstacles confronting him this fall are considerable. The persistence of #NeverTrump sentiment in some corners of the Republican Party — to say nothing of his problems with other segments of the electorate, particularly minorities and women — can't simply be discounted.

But neither should we ignore the factors that may propel Trump to victory: The 69% of Americans who say the country is on the wrong track, the hunger for change that naturally follows two terms of an incumbent party, the ever-looming possibility that Clinton may be felled by scandal or a simple misreading of the electorate's mood.

And for Americans profoundly disillusioned by the establishment class, Trump's testy relationship with his own political party may prove one of his strongest selling points.