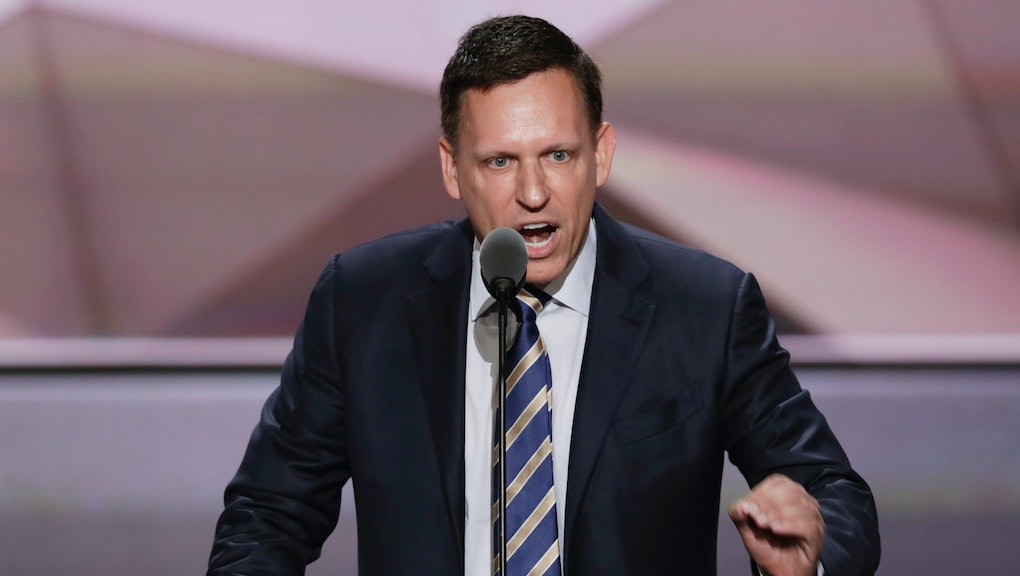 The NBA and Peter Thiel Called Out Homophobia, But Left Out This Crucial Problem

First, the NBA announced Thursday afternoon it was officially withdrawing the All-Star Game from Charlotte in response to North Carolina's House Bill 2, a controversial state law that reversed a number of protections for LGBTQ people that had been passed by Charlotte's City Council.

Later that night, Silicon Valley billionaire Thiel addressed the Republican National Convention, calling on Republicans to moderate their stance on gay rights. The official GOP platform dissents with the Supreme Court's decision to legalize same-sex marriage, and specifically defines marriage as being between a man and a woman.

"Every American has a unique identity. I am proud to be gay," Thiel said in his speech, which received lukewarm applause. He also said: "When I was a kid, the great debate was about how to defeat the Soviet Union. And we won. Now we are told that the great debate is about who gets to use which bathroom. This is a distraction from our real problems. Who cares?"

While these words and gestures are important in how they have brought attention to discrimination against gay and lesbian individuals, there is evidence companies like PayPal and the NBA don't actually have the best records of putting money where their mouths are when it comes to discrimination based on sex and gender.

PayPal came under fire earlier this year for touting a workplace gender equality panel that featured no female speakers.

Blake Masters, Thiel's former student and a co-author on his book Zero to One, described PayPal co-founder Max Levchin's take on company culture in a 2012 blog post as follows: "PayPal was a place where the younger engineers could and would sometimes wrestle with each other on the floor to solve disputes! If you didn't get the odd mix of nerdiness and alpha-maleness, you just stuck out."

The NBA still owns about half of all WNBA teams — which means the organization is far from blameless for the basketball gender wage gap.

Lest you think these matters affect only women, there's evidence that discrimination at work lowers the pay of gay men as well.

In other words, pay discrimination based on gender and sexuality is a problem for not just women — or straight women — but rather many within the LGB community.

In another RNC speech, Ivanka Trump dismissed the idea of a gender-driven pay gap. "Gender is no longer a factor creating the greatest wage discrepancy — motherhood is," she said, according to Vox.

While it's certainly true the high cost of childcare and other factors make earning more a challenge for working moms, there is clear evidence women are paid less for equal work even if they don't have kids.

By framing the issue strictly in terms of motherhood, Trump misses the point that financial inequality often stems from expectations about gender — and workers' identities.

Certainly, the NBA's decision to withdraw its All-Star Game — and the dollars that go with it — was a big step in the right direction, particularly for an organization with a spotty record on homophobic issues. And this is not the first time Thiel has spoken out against homophobia.

But the issue of gender-based wage discrimination, and sexuality-based pay gaps, specifically?

It's the topic on nobody's lips.