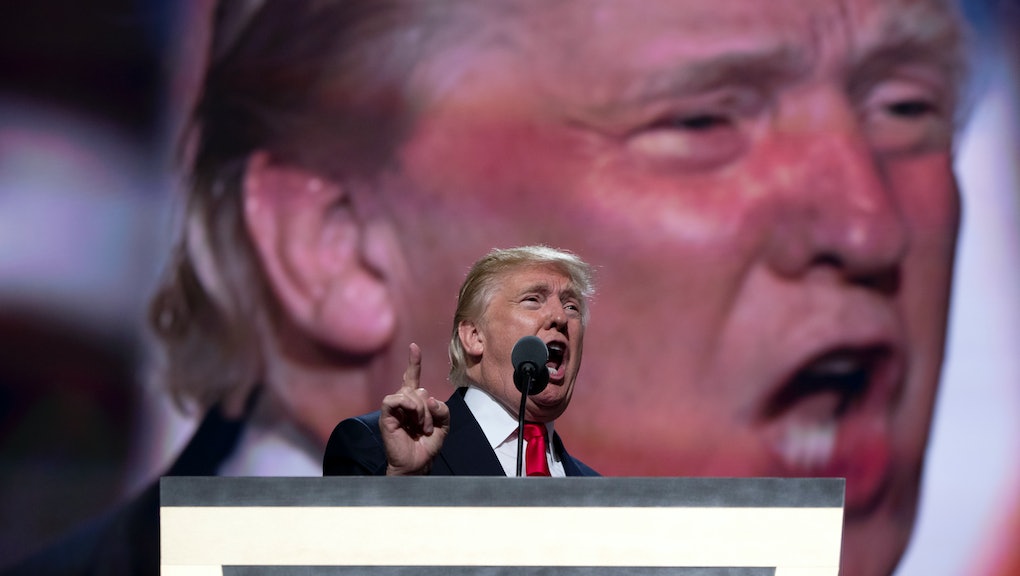 On Thursday night at the Republican National Convention, Donald Trump bet on fear. In a speech where he accepted the GOP presidential nomination, the reality TV star and businessman painted a terrifying picture of America — one where crime runs rampant, immigrants are flooding our borders to kill us and the next terrorist attack lurks perpetually around the corner.

"In this race for the White House, I am the Law and Order candidate," he said, framing himself — a virulent racist with an alleged $60,000 weave on his head — as the cure for America's social ills. But in light of Trump's vision, it's worth remembering the last time a Republican presidential candidate made such a claim — and how badly it worked out for the rest of us.

"For a few moments, let us look at America," Richard M. Nixon said in 1968. It was the Republican National Convention in Miami Beach, Florida. The former vice president, eight years removed from a general election defeat at the hands of John F. Kennedy, was accepting the GOP's presidential nomination for the second time.

This time he'd win, in part because he'd tap into the fears wracking so many Americans' minds.

Nixon was employing what came to be known as the "Southern Strategy." He and his advisers had identified disaffected white Southern voters as a key to electoral dominance for the GOP during the 1960s. As a result, Nixon's rhetoric tapped into their fears and sympathies — which were often leveled against gains made by black people during the civil rights era.

"Segregationists began to worry that there was going to be no way to stem the tide of public opinion and opposition to the system of segregation," Michelle Alexander, author of The New Jim Crow, told Frontline, "so they began labeling people who are engaged in nonviolent civil disobedience and protests as criminals and as lawbreakers."

This approach reverberated in the decades that followed. Starting with Nixon, preaching "law and order" governance became shorthand for "getting black people under control." The subtext was unavoidable. In 1967, black sections of Newark and Detroit erupted in riots, and in 1968 — mere months before that year's RNC — the same happened in Baltimore, Chicago and Washington, D.C.

White people wanted assurances they'd be kept safe amid the violence. Nixon obliged them. Half a century later, a similar sentiment is recognizable today. In 2016 — after riots gripped Ferguson, Missouri, and Baltimore in response to police shootings — a teeming backlash against black protest has taken hold in pockets of the American public, this time articulated through slogans like "Blue Lives Matter" and an insistent and unapologetic support for American law enforcement at a time of endemic anti-black police violence.

Nixon had a choice to make, and in 1968, he responded by promising to restore the rule of law. What came next was a disaster. He declared the "war on drugs" in 1971, which ballooned into a system of aggressive policing and criminalization, especially against communities of color, and sparked a mass incarceration epidemic that is unparalleled in world history. Today, 2.3 million people are locked up in America's jails, prisons and detention centers. Black people — the drug war's greatest casualties — are 13% of the U.S. population, but 40% of its incarcerated population.

"I will restore law and order to our country." — Donald J. Trump, 2016, speaking at the Republican National Convention in Cleveland, Ohio

In spite of it all, Trump unapologetically staked his claim to Nixon's legacy Thursday night.

"I have a message to every last person threatening the peace on our streets and the safety of our police," Trump said. "[When] I take the oath of office next year, I will restore law and order our country."

The crowd erupted in cheers. Many of them no doubt recognized the subtext to Trump's words, but others, perhaps, did not. The speech was so rife with inaccuracies and figures given out of context, however — like Trump's claim that homicides in major cities were spiking, when, in fact, rates are still at historic lows — that it's easy to miss how effective it must have been for those who did not.

Fear galvanizes people. It mobilizes them against common perceived enemies, and herds them, panicking, into voting booths. In our case, American history has given us a clear blueprint for what happens when a presidential candidate bets on fear, and calls for "law and order" governance in response to black disaffection. The lesson is ours, to learn or ignore as we see fit.