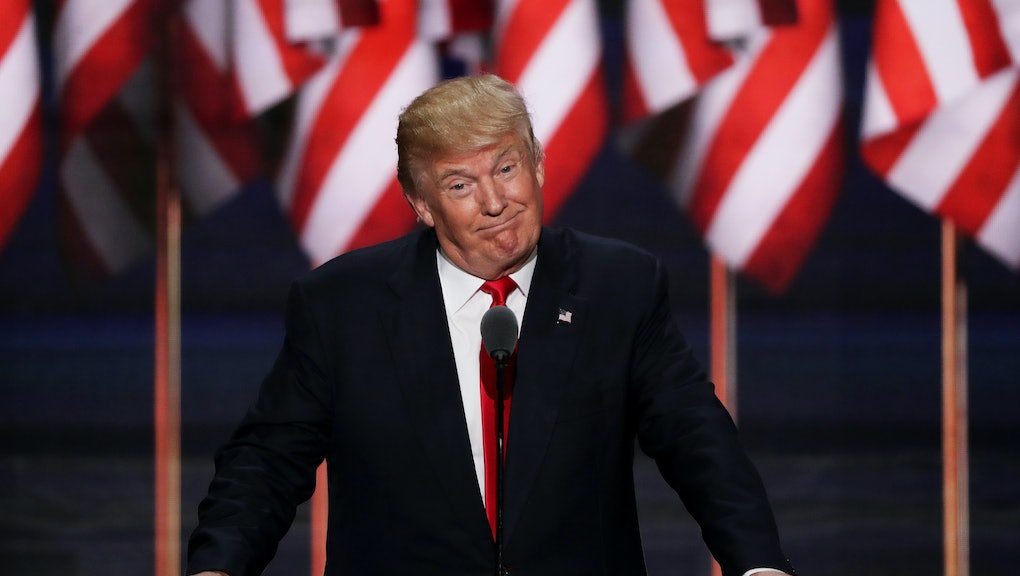 This week's Republican National Convention was one of the most chaotic and vitriolic in recent memory. Speeches were plagiarized, Nazi-esque salutes were inadvertently thrown, crowds and candidates jeered at one another from floor to stage — and all of it was accompanied by an equally divisive and abundantly ironic soundtrack.

The GOP made some pretty arbitrary choices regarding the music the convention played to frame their speeches railing on immigration or presumptive Democratic candidate Hillary Clinton. In several instances, the music's message directly contradicted the messages the candidates were perpetuating. Some of the first to point that out were the artists themselves.

Every morning of the convention, stories circulated about artists clapping back at hearing their songs played in the Quicken Loans Arena, vehemently denying connections to the RNC or the Donald Trump campaign. While their demands to cease and desist may not amount to much — there's slim legal precedent for affronts of this kind — their dissent only underscores how intolerably divisive the current GOP platform is.

Here are all of the artists who raised an objection to hearing their music played at the Republican National Convention — and the messages of love and acceptance they used these moments reassert:

The convention kicked off with objections from artists on its very first day, playing the Turtles' iconic 1967 hit "Happy Together" shortly after the opening of the event. "We never approved this use," the band's Howard Kaylan wrote on Twitter. "Now we call the lawyers."

The British rock band lashed out online after hearing "We Are the Champions" ring throughout the Quicken Loans Arena in Cleveland Monday. The group's Twitter handle tweeted the use of the song was "unauthorized" and "against our wishes," spurring Earth, Wind & Fire to do the same.

Earth, Wind & Fire, another Rock and Roll Hall of Fame group that did not give permission to the RNC to play its song "September," made their critique of the incident public on Tuesday.

The group's Twitter handle retweeted Queen, writing, "Another unauthorized use (September) at the Republican Convention, against our wishes - Earth, Wind & Fire."

The Rock and Roll Hall of Fame group the O'Jays had a scathing message for Trump after their 1973 classic "Love Train" was played without their permission.

"Our music, and most especially, 'Love Train' is about bringing people together, not building walls," singer Walter Williams said in a statement. "I don't appreciate being associated with Mr. Trump and his usage of our music without permission ... I don't agree, whatsoever, with Trump's politics."

Ivanka Trump was lauded for her ability to speak to young voters, and those who might not necessarily align with the Trump campaign or the RNC, following her introductory speech Thursday night for her father. She stepped out smiling and confident to the tune of "Here Comes the Sun,"  which George Harrison's estate was quick to blast on Twitter.

"The unauthorized use of #HereComestheSun at the #RNCinCLE is offensive & against the wishes of the George Harrison estate," the deceased singer's Twitter handle posted. "If it had been 'Beware of Darkness,' then we MAY have approved it!" That is how you deliver a music nerd burn.

The alternative rock group Third Eye Blind didn't play the Republican National Convention. However, Monday night they played at a charity event hosted by the same group as funds the RNC, and lead singer Stephan Jenkins used the stage to troll Republicans and Trump for their stance on LGBT issues and science.

The group took to the stage to discuss the messages behind their songs, promoting tolerance and LGBT awareness as singer Stephan Jenkins discussed his gay cousins.

At one point Jenkins joked, "You can boo all you want, but I'm the motherfucking artist up here."

Later, when a Twitter user tagged them in a post, writing, "I have never been more disappointed," the group only had a one-word reply: "good."