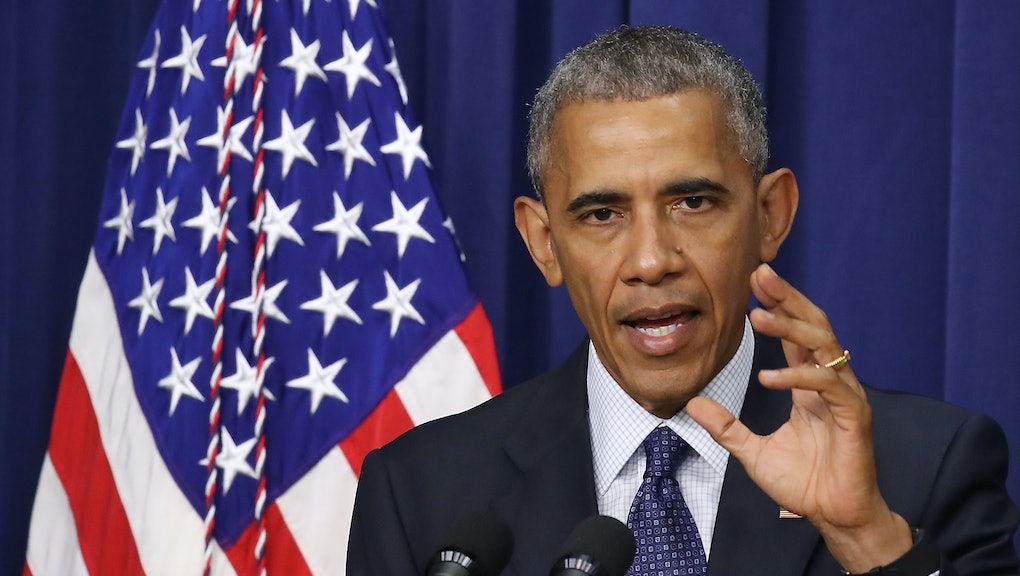 President Barack Obama issued one of his most forceful critiques of Republican presidential nominee Donald Trump on Friday, rejecting the candidate as a divisive liar and shooting down Trump's claims the U.S. is on "the verge of collapse."

"This idea that America is somehow on the verge of collapse, this vision of violence and chaos everywhere, doesn't really jibe with the experience of most people," Obama told reporters at a press conference in the White House alongside Mexican leader Enrique Peña Nieto, according to CNN. " ... I think it is important to be absolutely clear here. Some of the fears that were expressed throughout the week just don't jibe with the facts."

Obama also challenged Trump's claims about border security, according to the New York Times, saying "we have far fewer undocumented workers crossing the border than we did in the '80s, the '90s, or when George Bush was president. That is fact."

Finally, Obama took the time to explain how Mexican-U.S. relations were stable and chart the progress of the two nations' economic interdependency, according to NBC.

"Some $1.5 billion in cross-border trade and investment occurs daily, he said, supporting 1 million U.S. jobs," NBC wrote. "Friday's announcement of a new air transport agreement will open more U.S.-Mexican flight routes. Energy talks are planned for later this year. And Mexico and the U.S. will co-host refugee talks at the U.N. in September."

As White House press secretary Josh Earnest predicted earlier in the week, Obama said he did not bother to watch Trump's address because "I've got a lot of stuff to do," according to CNN.

While slamming Obama as an unpopular president is a core theme in Trump's speeches, recent polls suggest the president is actually enjoying a rebound in approval even as he re-enters electoral politics to endorse presumptive Democratic nominee Hillary Clinton.

In recent months Gallup polling has seen Obama's approval rating swing to 50 percent or above, in contrast to 2014, when his rating often swung as low as the low 40s — and his disapproval ratings have shrunk as well.