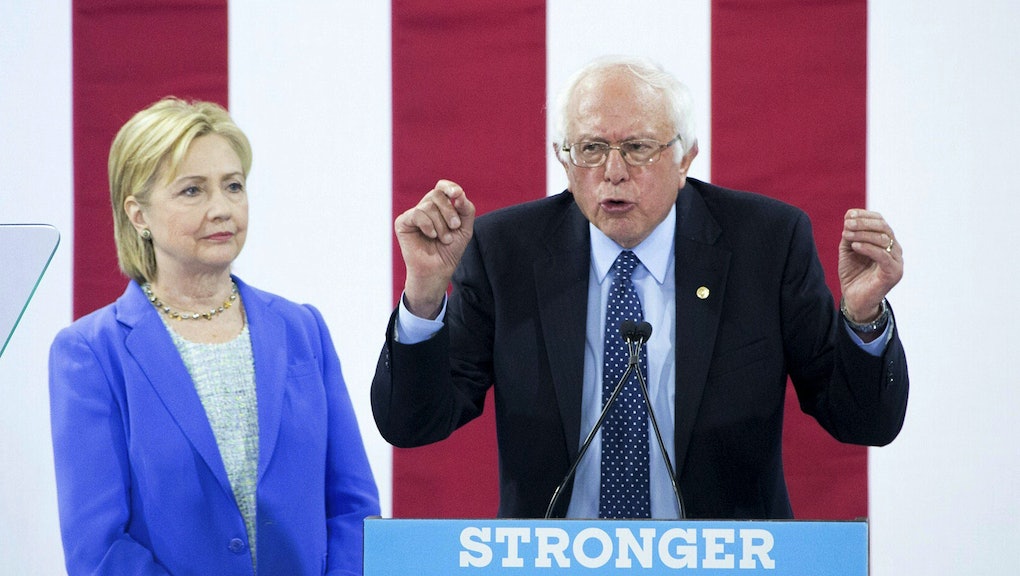 This week, digital secrets publisher Wikileaks released a huge dump of leaked emails from the Democratic National Committee, some of which back Vermont Sen. Bernie Sanders' claims the DNC and its chair Florida Rep. Debbie Wasserman Schultz were biased against him during his contentious primary run against Hillary Clinton this election.

The leaked emails span from January 2015 to May 2016 and include more than 19,000 emails from seven DNC accounts, some of which appear to show DNC staff mocking Sanders or suggesting ways to undercut his campaign.

In one particularly striking example, CNN wrote, DNC chief financial officer Brad Marshall wrote on May 5, 2016 that the DNC should "get someone to ask his belief" in god before upcoming primaries in Kentucky and West Virginia.

"This could make several points difference with my peeps," Marshall wrote. "Does he believe in a God. He had skated on saying he has a Jewish heritage. I think I read he is an atheist. My Southern Baptist peeps would draw a big difference between a Jew and an atheist."

In another from May 21, DNC press secretary Mark Paustenbach wrote to communications director Luis Miranda asking, "Wondering if there's a good Bernie narrative for a story, which is that Bernie never ever had his act together, that his campaign was a mess" regarding a dispute over a breach of Clinton campaign data temporarily accessed by Sanders staffers. "... It's not a DNC conspiracy, it's because they never had their act together."

When Clinton and Sanders feuded over whether Clinton was short-changing state party organizations on joint fundraising proceeds, attorney for the DNC Marc E. Elias suggested the DNC attack him directly.

"My suggestion is that the DNC put out a statement saying that the accusations the Sanders campaign are not true. The fact that CNN notes that you aren't getting between the two campaigns is the problem," Elias wrote, according to CNN. "Here, Sanders is attacking the DNC and its current practice, its past practice with the POTUS and with Sec Kerry. Just as the RNC pushes back directly on Trump over 'rigged system,' the DNC should push back DIRECTLY at Sanders and say that what he is saying is false and harmful (to) the Democratic party."

In other emails, the Intercept reported, Wasserman Schultz responded to Sanders campaign chair Jeff Weaver, who defended the senator against claims his supporters got violent at the convention in Nevada, by calling him a "Damn liar. Particularly scummy that he barely acknowledges the violent and threatening behavior that occurred."

When Maine Democrats voted to end superdelegates, party-appointed officials with the power to support a candidate at the nominating convention, DNC Vice Chair for Civic Engagement and Voter Participation Donna Brazille wrote the proposal was "absolute lunacy" and DNC CEO Amy Dacey said "they have no jurisdiction."

One person to respond to news of the hack quickly was Republican presidential nominee Donald Trump, who continued his efforts to appeal to Sanders' supporters by saying the emails were emblematic of the "RIGGED" system he himself decries in his campaign for the presidency.

Later in the day, Trump suggested Sanders' recent endorsement of Clinton could have only happened if Sanders was a "fraud."

Weaver told the Associated Press the emails revealed "what many of us have known for some time, that there were certainly people at the DNC who were actively helping the Clinton effort and trying to hurt Bernie Sanders' campaign." He also claimed the emails demonstrated "senior staffers ... [had a role in] planting negative stories about him with religious leaders in various states."