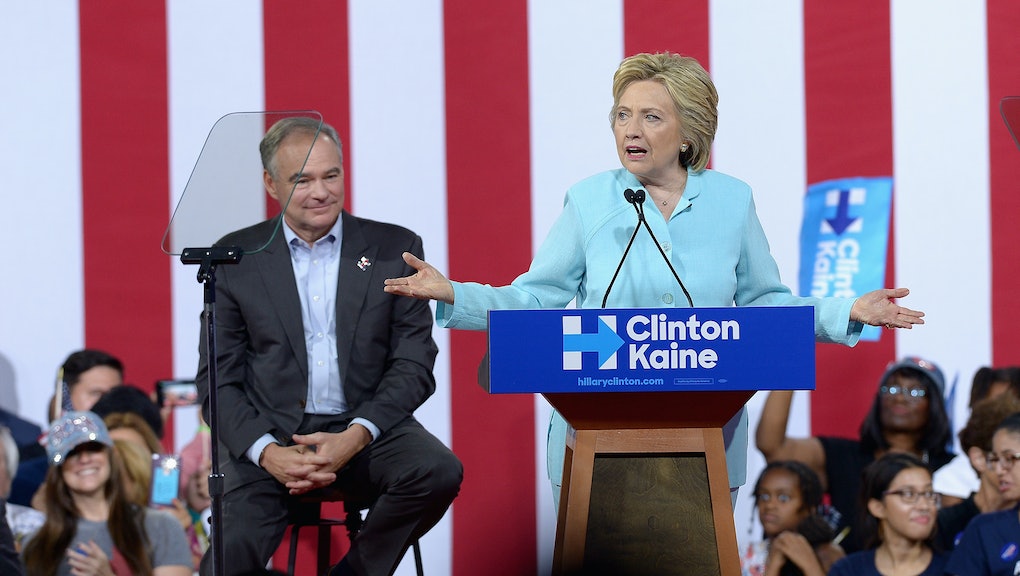 5 of the Biggest Moments in Democratic National Convention History

The 2016 Democratic National Convention begins this week with a bang. With the Republican Party now knee-deep in Donald Trump, presumptive Democratic nominee Hillary Clinton and her running mate Tim Kaine will have the opportunity to fire back accompanied by a slate of speakers ranging from President Barack Obama and First lady Michelle Obama to her bitter primary opponent Bernie Sanders.

Here's a look back at some of the most famous — or infamous — moments in DNC history.

On July 9, 1896, populist candidate William Jennings Bryan delivered a speech remembered for generations at the Democratic convention in Chicago. The issue under debate sounds quaint today — whether to maintain the United States' gold-backed currency or allow the free coinage of silver — but at the time, many Democrats saw the inflationary second option as desperately needed to lift the economy out of a savage depression.

Bryan, a famous public speaker, ended his speech as follows: "If they dare to come out in the open field and defend the gold standard as a good thing, we shall fight them to the uttermost, having behind us the producing masses of the nation and the world. Having behind us the commercial interests and the laboring interests and all the toiling masses, we shall answer their demands for a gold standard by saying to them, you shall not press down upon the brow of labor this crown of thorns. You shall not crucify mankind upon a cross of gold."

The room remained silent, until Bryan left the podium to a sudden, crashing applause from the audience, which remained in a furor for up to an hour. Though he delivered perhaps the most famous convention speech of all time, Bryan lost to Republican William McKinley, an advocate of "sound money," maintaining the gold standard.

1924: The extremely racist convention that went on forever — or for two weeks, anyways

One of the wildest major party conventions of all time fell in 1924, when the Democrats took 103 ballots and 16 days to finally stumble upon a nominee.

Additionally, numerous third-tier candidates prevented either candidate from gaining a two-thirds majority; the first round of voting started with 19 candidates and ended with some 60 getting at least one delegate's vote.

"Fistfights and screaming matches, featuring choice obscenities were common" Politico wrote. "On Independence Day, the 10th day of the convention, 20,000 Klansmen amassed across the Hudson River in New Jersey to burn crosses and punish effigies of Smith."

Neither candidate was able to secure the nomination, so compromise candidate John W. Davis was selected instead. He ran the Democratic Party into a ruinous defeat against Republican Calvin Coolidge.

Carter, whose administration had floundered under a series of scandals and political failures, had managed to suppress a challenge from Massachusetts Sen. Kennedy in the primary season — but he was caught off-guard when Kennedy attempted to unbind committed delegates at the convention to instead select him for the nomination.

Kennedy failed, and gave a speech ending: "For me, a few hours ago, this campaign came to an end. For all those whose cares have been our concern, the work goes on, the cause endures, the hope still lives and the dream shall never die."

When Carter won the nomination, Kennedy famously only shook his hand briefly at the podium before trying to sneak from the stage. In his memoir Keeping Faith, a Carter characterized Kennedy's perceived "lack of enthusiasm" as an "accurate impression was quite damaging to our campaign, and was to linger for a long time."

Then a three-term representative from New York and former prosecutor from Queens, Ferraro's 1984 selection as the V.P. on former Vice President Walter Mondale's ticket was a historic event.

"If we can do this, we can do anything," Ferraro told the audience from the podium, according to the New York Times. In her obituary, the paper wrote, "For the first time, a major candidate for national office talked about abortion with the phrase 'If I were pregnant," or about foreign policy with the personal observation 'As the mother of a draft age son...' She wore pearls and silk dresses and publicly worried that her slip was showing. She also traveled a 55,000-mile campaign trail, spoke in 85 cities and raised $6 million."

Ferraro, who won acclaim for her speech, later became embroiled in controversy over her finances, contributing to the Mondale campaign's woes and later loss.

2004: Barack Obama paves his way to the presidency with magnificent convention speech

Obama, who was in 2004 just an Illinois state senator running for the federal legislature, was little known until he was tapped to give the keynote speech at the 2004 Democratic convention. The speech was a turning point in his career; though former Secretary of State John Kerry would carry the ticket, Obama would soon become a household name.

"Now even as we speak, there are those who are preparing to divide us — the spin masters, the negative ad peddlers who embrace the politics of 'anything goes,'" Obama told the crowds. "Well, I say to them tonight, there is not a liberal America and a conservative America — there is the United States of America."

"According to an August article in The New Republic, Obama was selected over some better-known names by the Kerry brain trust, which included [Kerry campaign manager Mary Beth] Cahill and adviser Robert Shrum, for various reasons," CNN wrote in 2008. "As an African-American, he would help attract minority voters; Obama was also youthful and energetic, qualities that the Kerry campaign wanted to display on television."