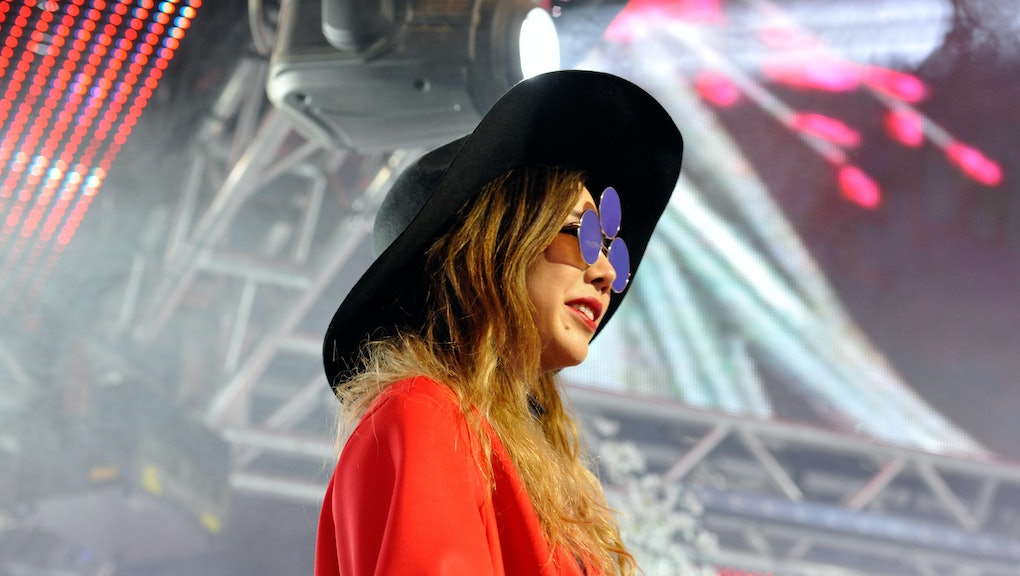 Tokimonsta is a boss — literally, figuratively and undeniably. Dressed in all black and caped in a flowing floral robe, she barely broke a sweat in the 90-degree heat when we met up to talk Saturday at New York City's Panorama Festival. Had she not cracked a joke about the inferno, I wouldn't have thought she felt it.

The Los Angeles-based producer and frequent Grimes collaborator has been a veteran of this summer's festival circuit, delivering wobbling J Dilla-esque EDM and repackaging classic hip-hop — like Ol' Dirty Bastard's "Shimmy Shimmy Ya" — with her own teetering flair. She's been headbanging in heat since around 2010. That year, she made headlines when she became the first female producer to get signed to Flying Lotus' Brainfeeder label. However, now, she'd love nothing more than to bury that distinction.

"At that time, it was significant, it meant a lot to me and probably other females," she said. "Now, when I look back at it, I don't want that to be a defining factor of who I am as a musician. At this point I don't even want it on my bio or anything."

However, it's somewhat of a Catch-22, the artist admits. Females tend be a grave minority in music production — making up only 5% of the community by some estimates. As such they tend to be underestimated and disrespected in the booth, or watch their contributions get downplayed after the fact. Discussing these horror stories doesn't always seem to generate progress, but if one doesn't illustrate the dynamics plainly, how can the industry take steps forward?

"It's necessary and it's unnecessary; it's kind of like: You have to talk about the gender issue, in order for it not to be an issue anymore," as she said. "But if you keep talking about it, that means it's still an issue."

Tokimonsta speaks through her music: control the artistic process entirely, don't leave space for any doubt that outside help is what gave her beats their hypnotic swagger. What you hear is her vision, start to finish, up through the release and promotion, which she handles through her own label, Young Art, launched in 2014.

We spoke about the challenges that have come along with that new venture, as well as some of the recent releases its offered, including a re-release of her debut Midnight Menu.

The interview has been edited and condensed for clarity.

Mic: Let's start with the new album, or the old album rather. What's the story behind the re-release?

Tokimonsta: Well it's interesting because that album, when I had put it out, it had never occurred to me that was my first album, because I had already released so many EPs at that point. I didn't realize how significant it was until after the fact. Once I did, I was like: hmm, maybe I should have done something different, or perhaps if I thought about how important this album should be, I would have done different songs. But over the years I realized the way it came out is the way it should have been because, you know, it means a lot to some of my fans.

It came out on a Japanese label called Art Union. I got the album back after three years, but I guess we never got around to posting it back up. So we finally found a good time, where enough time has elapsed since my last EP [FOVERE] and it seemed a really good time to put out this album, and put it up on Spotify and Apple Music, Tidal and all that. I also put it up on SoundCloud for people to listen to for free, you know. I'm a firm believer in just having people have access to music for free.

What does it feel like going back and listening to that?

T: I mean I still play a lot of it in my sets. But it as a whole, I've evolved and progressed a lot as a producer and a musician. When I listen to that album, I can critique it and pick apart the sounds, thinking on whether they're as clean as they would be if I could back and remix everything now. But creatively, I look at and I have no idea how I made this album. I don't know how I put it together. My mindset isn't the same as it was then. I don't approach music the same way, so when I listen to it, I think, oh this is cool. I don't know how I did it, but it happened. I impress myself, like I approach it as if I was a third person.

I've seen you quoted in several pieces about how people can get more females into music production, but I got some kind of sense, from the way that you answered, that you were somewhat bothered by the fact that people were gendering the conversation so much.

T: Yeah, to have to point out it — that means it's unusual. It's commonly assumed for a producer to be male. So you don't see that "male producer," but that female producer, that chick, you know. In the future, when there are more females making music we won't hear that anymore.

What do you see as the best way forward? What will dissolve that conversation?

T: I never outwardly talk about things like that, things that can come off gimmicky to people. I try to lead by example. I never talk about the issue unless it's brought up to me. And I do have very specific opinions. But as a musician, what I feel should be the most important thing is the music, and that's what I do. But I do have this social responsibility because I am a female producer and that does mean a lot to a lot of young girls that want to do the same thing. So I stay aware and try to maintain my integrity.

Did you foresee you would be answering questions like this when you started?

T: I knew it wasn't common. I didn't think at any point when I started making music that I would even get interviewed for anything. I thought I would just be on my computer making beats, having a job on the side and everything. But the moment I started getting press, that was the first question. Every single interview I've ever had has had that question pop up: "What is it like being a female producer in a very male-dominated world?" And I'm like, you know what? I don't make it a big deal. I don't victimize myself.

There have been moments where I feel like people don't — not that people don't treat me fairly, but there's a certain level of disbelief. But the way the kind of person I am, I want to overcome that. If someone thinks that I'm incapable of doing this, or that I don't mix stuff, then it's more important for me to make sure that I mix all my music, I make all my music. I very rarely collaborate with other producers. I've done it once. But other than that, it's like I need to prove it to everyone that I can do things by myself, just to make sure there are no naysayers out there.

So going solo, leaving Brainfeeder — what drove that?

T: It's an independent label, no one's ever really signed with any kind of crazy deal. It was more like FlyLo saying "Do you want to put something out on my label?" And I was like "Yeah, sure." That was basically it. In the future, who's to say if I don't put something out with them again? But other opportunities came.

I want to build something like FlyLo did. When I'm able to A&R and help other artists rise up. That's what I get to do with my label, Young Art. It's kind of cool.

Tell me about some of the challenges you've faced. Is running a label what you thought it would be?

T: It's still a baby label. But we have already have three, but with Midnight Menu that will be the fourth. We put out Cri, which was the producer, who I released, who's amazing. He's really cool, he's from Montreal. I feel like I'm lucky because I know what I'm good and not good at. I'm not great at the actual running-of-the-label part. So I have a really good label manager who handles all of that. It's still growing, and I invest a lot into it. It's kind of like my little baby Pokémon. It's gonna evolve.