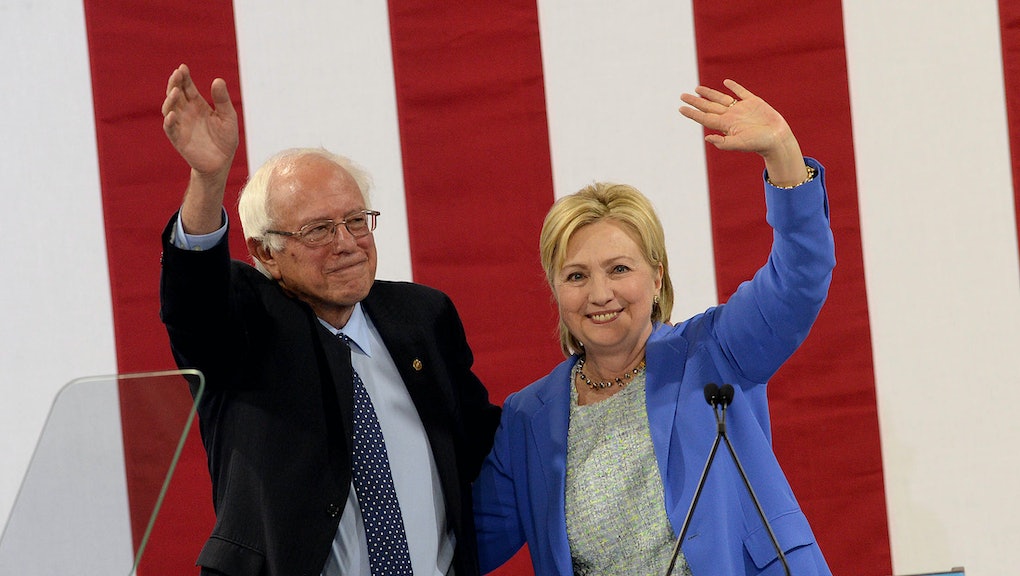 PHILADELPHIA — The Democratic Party that convenes here this week won't be nominating Bernie Sanders for president, but the Vermont senator's imprint is all over the party's platform, with its progressive positions on signature Sanders priorities, from student debt relief to a $15 federal minimum wage.

For liberals who long tussled with the party's centrists, the Democratic National Convention here marks a triumph years in the making.

"The main story of this convention is that after years of work, the Democratic Party is running on many bold progressive issues that are popular with voters, like debt-free college, expanding Social Security, breaking up too-big-to-fail banks and the public option," said Adam Green, a co-founder of the Progressive Change Campaign Committee. "Two years ago, nobody would've predicted that the Hillary Clinton Democrats would've been united around these issues."

That agenda — and Clinton's unabashedly progressive platform on issues like criminal justice reform and gun control — isn't merely the byproduct of Sanders' stronger-than-expected challenge. They also stem from a profound transformation of the party whose nomination Clinton is slated to accept here Thursday night.

The Great Recession and the plodding recovery that followed explain much of the party's shift to the left, according to Princeton University historian Julian Zelizer.

While Bill Clinton tacked to the center on economic issues — championing the North American Free Trade Agreement, signing a stringent welfare reform law and deregulating the financial industry — the 2008 financial crash moved the party's center of gravity, moving issues of "economic inequality and economic insecurity" to the fore, Zelizer said.

President Barack Obama also helped catalyze the shift — and not only because many progressive supporters of his 2008 bid found themselves disappointed in his center-left administration, leading them to embrace more populist figures like Sanders and Sen. Elizabeth Warren of Massachusetts.

"He passed a lot of liberal legislation," from health care reform to the Dodd-Frank financial overhaul, Zelizer said. "That raised progressives' expectations of what could be done legislatively and really elevated the debate."

Since Obama's election, the country has also witnessed a cultural sea change on same-sex marriage, which most Democratic leaders opposed in 2008 but came to embrace as it attained majority support, as well as on race and policing, with Democrats from Warren to the centrist Sen. Cory Booker of New Jersey embracing the Black Lives Matter movement and its demands for criminal justice reform.

Eight years after Obama capitalized on progressive distrust of Clinton to defeat her for the Democratic nomination, she is now running on a platform that's decidedly to the left of where Obama stood in 2008.

So why the dissatisfaction? Many hard-core progressives remain indignant that it will be Clinton taking the stage to accept the nomination at the Wells Fargo Arena on Thursday. Angry Sanders supporters have filled the streets here to protest Clinton's nomination — even after the senator awarded his erstwhile rival a hearty endorsement this month, touting her progressive bona fides and saying she would make an "outstanding president."

The leak of emails in which Democratic National Committee staffers disparaged Sanders' candidacy has reopened the wounds of the fierce primary battle, reinforcing his supporters' narrative that the system was rigged against him. To Sanders' most committed foot soldiers, DNC chair Debbie Wasserman Schultz's resignation Sunday came months too late.

Most important, however, is that many on the left simply don't trust Clinton to carry out the progressive agenda on which she's campaigned.

Clinton herself has signaled that she prizes moving the needle over progressive purity, casting herself and running mate Tim Kaine as progressives who "get things done" and saying last year that she pleads "guilty" to "being kind of moderate and center."

In light of Clinton's recent opposition to a federal $15 minimum wage and free public college and her track record of supporting in office free trade deals that she'd opposed while campaigning, it's hard for many Sanders voters to find solace in the platform plank on the minimum wage, or in Clinton's avowed opposition to the Trans-Pacific Partnership. Once in the White House, they fear, Clinton would eschew progressive populism.

"Republicans recognize the importance of playing to their base," Zelizer said. "There's been a tendency for Democrats not to do that," he added, saying that the Clintons were particularly prone to thinking that "conservative elements in the electorate" limit the scope of the politically possible.

A new tack? The Kaine selection seemed to forecast a more centrist direction for Clinton, given that the Virginia senator is, like Clinton herself, a past advocate of the TPP and also supports loosening banking regulation. Liberal groups like the Progressive Change Campaign Committee and Democracy for America criticized Kaine's selection, saying it undermined Clinton's populist campaign themes.

But while Green called Clinton's centrist running mate a "dent in the armor," he said it was in her self-interest to continue charting a progressive course.

A June poll found that economic populist sentiment transcends ideological boundaries, with 71% of Americans saying the economic system is "rigged in favor of certain groups." Republican nominee Donald Trump has tapped into such feelings, depicting Clinton as the guardian of the economic status quo during his Republican National Convention address last week.

"With Donald Trump at least pretending that he won't cut Social Security and that he'll kill the corporate TPP deal, Hillary Clinton cannot afford to be outflanked when competing for blue collar voters," Green said.

Trump is actively courting Sanders supporters by highlighting their overlapping messages on free trade and taking on the political establishment, and has called the Kaine selection a slap in the face to Democratic progressives. Given this reality, Clinton can't take her party's left flank for granted, Zelizer said.

"Generally the conventional wisdom in this situation is that she should play to the center and be comfortable doing that," he said. "Sanders challenged that conventional wisdom. He showed that the progressive wing has a lot more muscle than most analysts thought. So she's in a more difficult position."