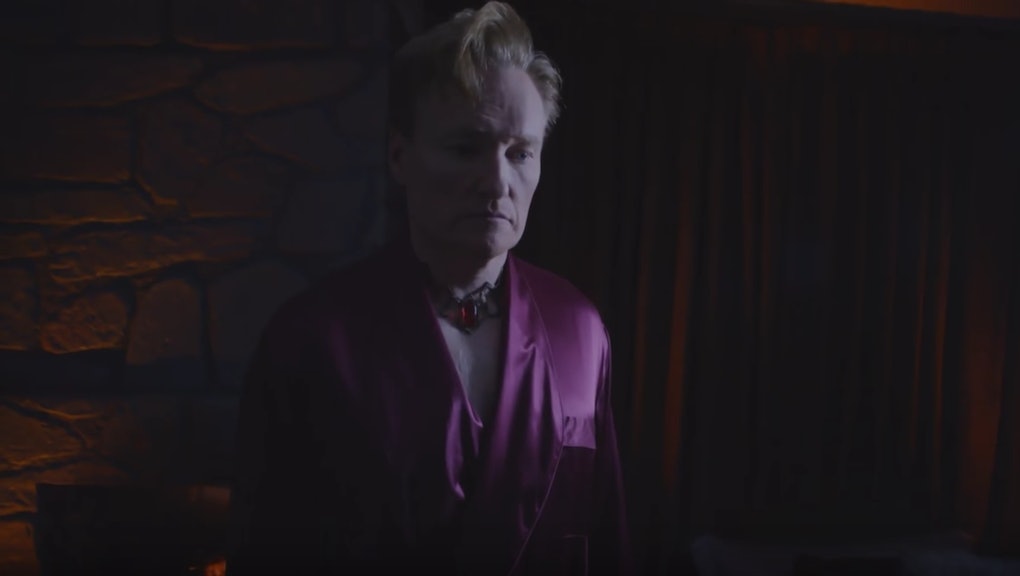 Those working in front of the camera in showbiz invariably use layers upon layers of makeup and other cosmetics. But boy, we had no idea how much Conan O'Brien was using.

Spoofing Game of Thrones as part of Conan's late-night coverage from San Diego Comic-Con, the host showed a new cold open where he checks into his hotel for the event. With the overly eager help of a bellhop — played by Review alum Andy Daly — O'Brien reaches his hotel room and gets ready for bed. As he dons a fancy red robe, Westerosi viewers see something familiar: a pulsing red ruby on his neck, just like the one Game of Thrones' Red Priestess Melisandre wears.

For anyone who's watched season six and is familiar with the Melisandre reveal, the moment when O'Brien removes the necklace will be permanently burned into your retinas. (Consider this your warning for what's ahead.)

Unfortunately for O'Brien, the bellhop won't let him go to bed, and he repeatedly knocks on the door to ask him if he needs anything else for his stay, whether it's a Toblerone from his "secret stash" or some toilet paper for the room. Eventually, a frustrated O'Brien steps outside the room to ask him to go away and allow him to sleep, but he locks himself out in the process.

The bellhop — unfazed by O'Brien's appearance, or the fact that he's completely naked — lets him know he'll have to go downstairs and get a new room key in person. Despite O'Brien not having ID, it shouldn't be a problem.

"Everybody knows that face," the bellhop concludes.