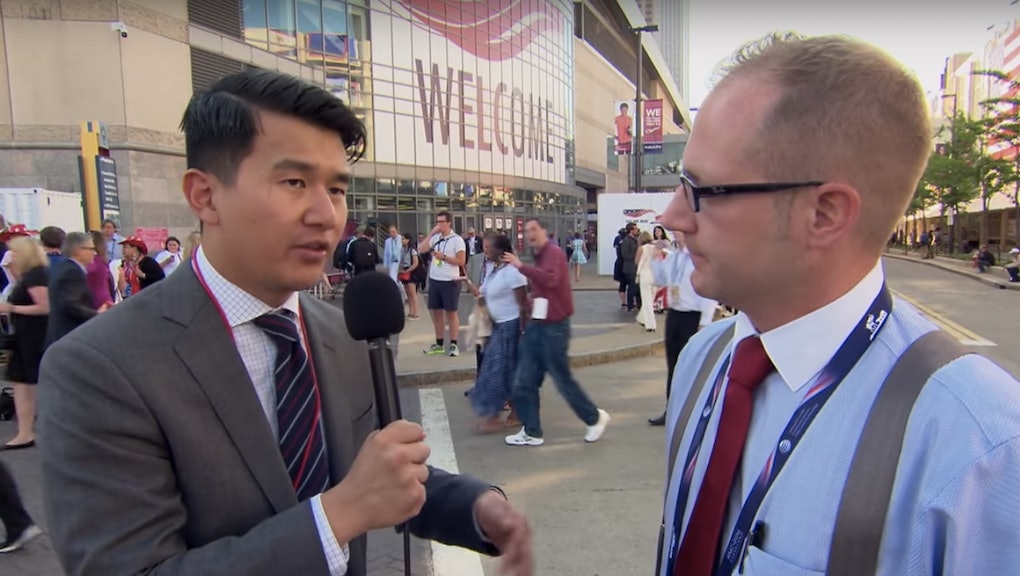 The Daily Show sent a team of their reporters down to the Republican National Convention to ask attendees a question prompted by Donald Trump's infamous campaign slogan "Make America Great Again!"

Correspondents Roy Wood Jr., Jordan Klepper and Ronny Chieng asked Republicans one simple question: "When Was America Great?" Nearly all the answers  forgot to take account the horrific practices of slavery, segregation, prohibiting the women's right to vote, and even the effects of crack cocaine.

Here are some of their answers: One man thought America was great when Congress passed a law implementing the framework for the U.S. Senate. He forgot to mention that women still didn't have the right to vote in 1913.

Two women said that America was great when it was established. Wood Jr. quickly pointed out that slavery was still in practice then. After a long silence, one of the women jumped in and said that the founding of the country was great "except for the slavery stuff."

A man in suspenders told Chieng that America was at its greatest right after World War II. When Chieng pointed out that segregation was still a part of the law, the man quickly defended his answer by replying that we can all "paint negative faces on all times in America."

An attendee donning a cowboy hate and a Texan button-up shirt said that the 1980s were a "pretty good" time in American history with great music, great video games and crack cocaine.

When this man with a red, white and blue bowtie responded that 1776 was a time when America was great, Chieng was quick to point out that he didn't take slavery into account. The man then referred to slavery and the ethnic cleansing of Native Americans as a "few hiccups" in American history.

Then the interviewee dug himself into an even deeper hole. He told Chieng, who is of Asian descent, that "nobody made it to the top without breaking some china." After acknowledging Chieng's facial expression, he quickly mentioned that it wasn't meant to be offensive toward the reporter.

While the answers are both entertaining and cringeworthy, it reveals an interesting point: That these Republicans tend to perceive the greatest moments in American history when white men had the most power. Almost all the attendees featured in the video failed to consider the oppression and dehumanization of other marginalized communities because their demands and needs as white men in the United States were already met by the late 20th century.

You can watch the whole segment here: