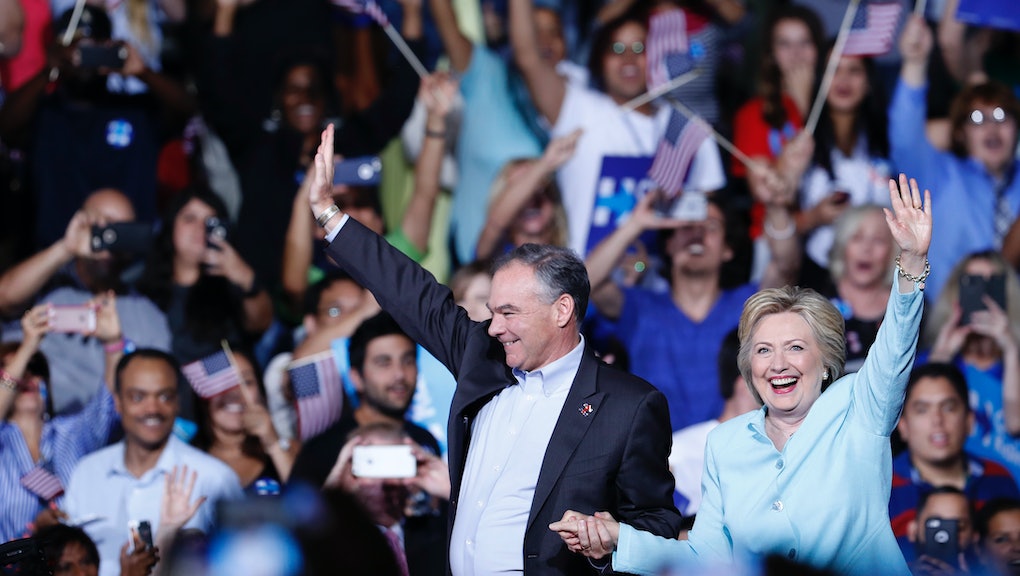 Here Are the Rules for the 2016 Democratic National Convention

The 2016 Democratic National Convention in Philadelphia kicked off Monday, setting in motion a four-day series of speakers including President Barack Obama and Vermont Sen. Bernie Sanders and priming Democrats to hit back in earnest against the dark tone set by Republican nominee Donald Trump's during last week's Republican convention.

The victor at the DNC this year is predetermined: Former Secretary of State Hillary Clinton will be the party's nominee, and Virginia Sen. Tim Kaine, her running mate. Clinton's only true primary opponent, Vermont Sen. Bernie Sanders, has endorsed her. To understand why there is no real possibility of things going wrong for Clinton, here's an overview of the process by which this week's events will play out.

Presidential primaries do not work on a simple majority basis; instead, each candidate must accumulate delegates, representatives for the party members voting in each state who attend the convention in their stead. The rules for appointing delegates vary by state, with some adopting a winner-take-all system and others allocating them proportionally, but the magic number is 2,283, the number of delegates necessary to win the Democratic nomination in the first round of uncontested voting at the convention.

According to Ballotpedia, while the DNC's rule committee has had nowhere near the same drama surrounding its Republican counterpart (including failed proposals to unbind the delegates to rebel against Trump) this year, the 187 members of the committee did reject a proposal to eliminate party-appointed superdelegates on July 23.

Superdelegates are not elected during the primaries, but are appointed by party officials as a deliberate restraining mechanism on the whims of the Democratic electorate. These superdelegates control a vote equal to elected delegates and are not obligated to support any candidate at the convention. Of the approximately 713 superdelegates, some 604 are known Clinton supporters, with just 47 supporting Sanders.

In addition, according to Ballotpedia, the remaining 85% or 4,051 of the delegates are "pledged," meaning that, unlike superdelegates, they are obligated to support whichever candidate Democratic primary voters in their precincts selected.

Both candidates are short of the 2,283-delegate tally necessary to win the nomination outright. But Sanders dropped out of the race after it became clear he could not win at the convention without seizing a majority of the Clinton-friendly superdelegates, a virtual impossibility. With 2,218 pledged delegates, Clinton can afford to lose many superdelegates even in the unlikely scenario Sanders convinced some to part ways with the Clinton camp.

So unless someone gets a crate of the sunglasses from They Live and reveals Clinton to be an alien infiltrator, she will coast through the DNC as a mere procedural formality and celebratory event. Sanders has even asked for his supporters not to protest Clinton's nomination at the convention.

If Clinton did not have an unassailable advantage going in, then the rules would get rather messier, as the delegates could vote to unbind themselves "in all good conscience," according to the Brookings Institution. Such a scenario was retrospectively possible in 2008, when then-North Carolina Sen. John Edwards was winning in primaries while secretly carrying out an illicit affair replete with accusations the candidate illegally dipped into his campaign accounts.

"... In the event of a competitive primary process, delegates at a convention could have more difficulty in reaching a clear majority of support for any one candidate," the Washington Post wrote in 2008. "A brokering process then takes place, with multiple ballots a possibility. Though a brokered convention has not occurred in either party since 1952 when Adlai Stevenson won the Democratic nomination, some say it remains a possibility for either party in 2008 because of the closeness of both races."

But even in the case of a contested convention, Clinton would have a key advantage: ally Rep. Debbie Wasserman Schultz, the chair of the DNC. Though Schultz recently said she would resign her role after leaked emails showed DNC staff were biased against Sanders throughout the primary season, she intends to keep her role until the convention proceedings are complete.