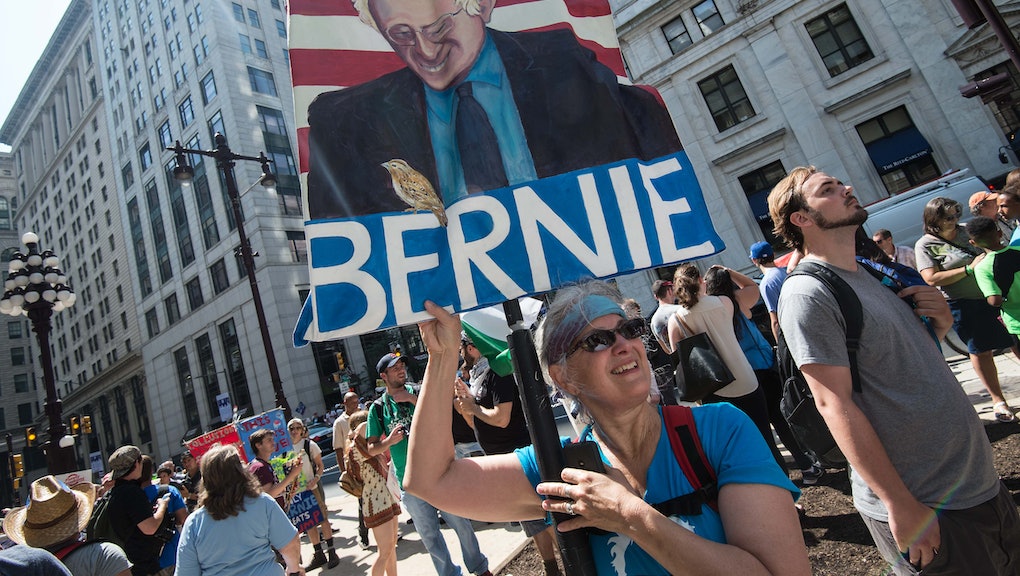 Bernie Sanders Supporters at the 2016 DNC: Don't Blame Us if Donald Trump Wins

PHILADELPHIA — Bernie Sanders' most defiant backers have poured into Philadelphia, marching through the streets in 90-degree heat and vowing never to support Hillary Clinton — even if their refusal to do so hands Donald Trump the presidency.

This band of progressive activists and protesters has cast a shadow over the convention, as Democrats reel from a leak of party emails that led to the ouster of chairwoman Debbie Wasserman Schultz.

This appearance of disunity and turmoil is precisely the opposite of what the Clinton campaign hoped to project coming into the convention. While these "Bernie or Bust" voters constitute a tiny sliver of the electorate (and make up a fraction of Sanders' own primary backers), their outsize presence here in Philadelphia is causing a headache for Democrats hoping to show that the party is united behind defeating Trump, the Republican nominee.

In a series of interviews at a pro-Sanders rally outside City Hall on Monday, nearly every demonstrator we talked to said they planned to either write in Sanders' name in November or cast their ballot for presumptive Green Party nominee Dr. Jill Stein. Only one said he planned to vote for Clinton.

But what if Trump wins the election? Will they feel responsible? Almost all said they would not, instead laying the blame at the feet of the Democratic National Committee and Clinton herself for failing to address their concerns.

Bernie or Bust: The demonstration at City Hall was organized by Steve Layne, a 24-year-old national organizer with the Equality Coalition, a pro-Sanders group. While taking a break from rallying the crowd of several hundred over his bullhorn, Layne said that he was bothered by the idea of Trump potentially winning due to a fractured Democratic Party, but downplayed the likelihood of Trump emerging victorious.

"I don't see Sanders supporters actually swinging to his side," Layne said. "If that does happen, then the Democrats brought it on themselves."

Emma Downey, a San Francisco native and student at Bucknell University, said she voted for Sanders in the California primary, and was in Philadelphia to send a message to the DNC.

Asked whether Clinton can do anything to win her vote, Downey said Clinton "is obviously the lesser of two evils... but I don't condone her brand of feminism, so at this point I don't think so."

Downey said her calculation might be different if she lived in a swing state, but said "it's a catch-22. You're either for the lesser of two evils or you're sticking with what you really value." She said she plans to vote for Stein in November.

While Downey was speaking, a truck with a billboard saying "HILLARY FOR PRISON 2016" drove by, eliciting loud cheers from the crowd. Moments earlier, demonstrators chanted, "Hell no, DNC, we won't vote for Hillary!"

Stein's popularity with Sanders backers was evident — many demonstrators carried pro-Stein signs, and her campaign was on-site to collect the signatures needed to place the Green Party candidate on the ballot in states across the country.

Amie Myers, the treasurer of the Green Party in Maryland, was collecting signatures for placing Stein on the ballot in Virginia. Asked what she expects Sanders backers to do in November, Myers said "it depends on which state people live in. If they live in a swing state, then they need to be more concerned. I live in Maryland. I can pretty comfortably vote for Jill Stein and not worry about my vote having anything to do with Donald Trump."

Toward the end of the rally at City Hall, Myers' point was proven. A handful of protesters carrying large red flags stood inside the square at City Hall, contemplating their next move. The group called itself the "Socialist Contingent," saying they were a group of socialists from Philadelphia who came to the convention to advocate for "revolutionary and institutional socialism."

Jake Kinzey, a 26-year-old teacher from Philadelphia, said he had registered as a Democrat to vote for Sanders in the Pennsylvania primary, but was an unenthusiastic member of the party. He said he planned to switch his registration after the election — but not before casting his ballot for Clinton.

"I will not be a Hillary booster. I will talk shit about her until the election comes. But I probably will vote for her, because living in PA, Trump is about to take over," Kinzey said. "I'd feel bad if I didn't do anything."

For Kinzey — a self-identified socialist running around the DNC with a red flag — stopping Trump is more important than making a statement against Clinton and the Democratic Party. The Clinton campaign is banking on most Sanders supporters making the same calculation.