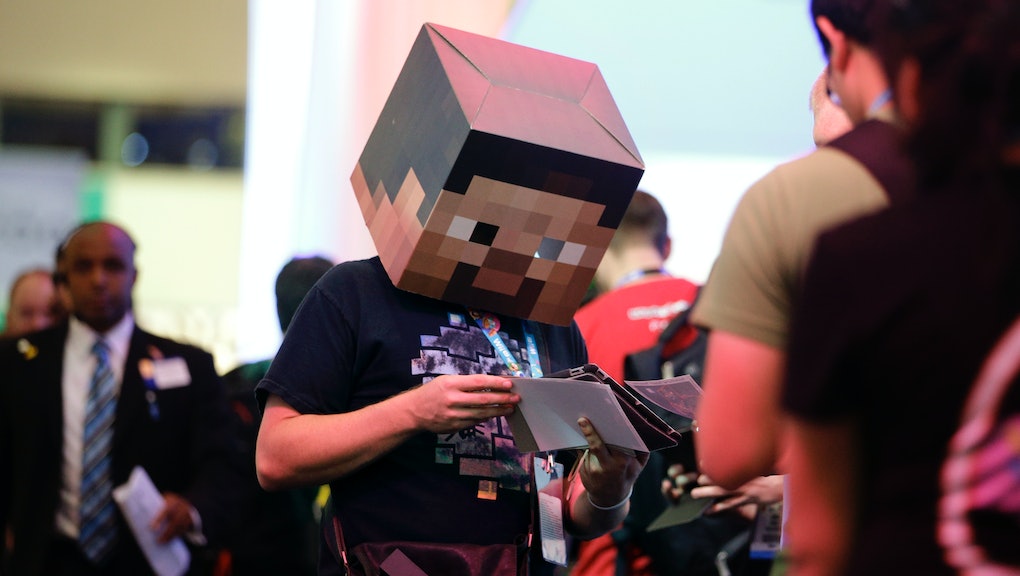 In Minecraft's Creative Mode, you can fly and craft from your infinite resources. In Survival Mode, you can also craft, but you'll need to earn your resources. And you can't fly, but you can die. Spiders, skeletons, creepers, zombies, etc. come out at nightfall — and when you're still learning how to move your body and point of view at the same time or build yourself a safe space, the little blockhead version of you is probably toast.

In a Reddit thread, gamers shared their first experiences in Survival Mode, and they are foreseeably filled with tales of thrill, fear and death. A lot of death. So much f*cking death. Luckily, when you die in Minecraft, you're spit back out to your spawn point, all of your resources lost, but you can't put a price on a good lesson learned ... right?

When redditor wegie125 asked what users' first day and night in Minecraft was like, the top comment is, simply, "death." Others go into more detail.

"In the day time, I struggled the entire time just trying to figure out how to break blocks," redditor Farlong wrote. "I was doing spam clicking, and not holding it. Around nighttime, I finally learn how to break wood. The moment I do a spider comes and murders me. I quit after that and decided to watch tutorials first before playing."

"I built a dirt house, walked about 20 blocks away, got turned around trying to kill a cow and couldn't find my house again," Halicar_Impala wrote. "I walked into a cave and it happened to have a spider dungeon literally 10 blocks in and I got killed. I then thought that every cave had spawners in it. Also I had no torches or cooked food because I thought you had to have an iron pick to mine coal. I had watched a couple episodes of X's Adventures in 'Minecraft' and I think he mistakenly said that (or maybe I remembered wrong)."

"I took refuge in a nearby cave by the river, I died by a giant spider and never found it again," wrote suesays.

"I ran punching trees around all day then dug a hole into a hill at sundown where I had the pleasure of listening to a zombie outside all night in the pitch blackness," wrote Zanovia. "Then I tried to leave out one way only to hear a creeper. So I dug out the opposite side of the hill ... only to die to a different creeper."

"Spent the entire day spam clicking a tree then gave up and got blown up," wrote Still_Alive_2 (lol).

"I was digging a trench and got blown up by a creeper," wrote Porschwa.

"I spent the entire day trying to break a log by clicking," _Sound_of_Drums_ wrote. "I noticed the breaking animation so clicked more rapidly. I was getting extremely frustrated with the process. Night came. A skeleton spawned. I died."

"I [mistakenly] thought that I would swim automatically, but whilst drowning saw a temple underwater so that's a plus," wrote ogtrashpicker.

"Death, rapidly followed by death, dead by suffocation, dead off a cliff (being chased by creeper — very slowly), dead in a hole, dead in water, dead by arrows..." sarah1943 wrote. "Not what I would call an enlivening experience, dawn arrived eventually and I discovered Wiki."

"Crouching on a lilypad and trying to stay as far away as possible from the creepy purple eyes," wrote Shnezzberry.

"I was so scared by the sounds," wrote puppetzz. "I build tiny 2x1 space home with woods I collected then waited in the dark, finally morning comes :D"

As MSTwaterbug puts it concisely, noobs in Survival Mode are getting acquainted with a whole new world — and their own imminent mortality: