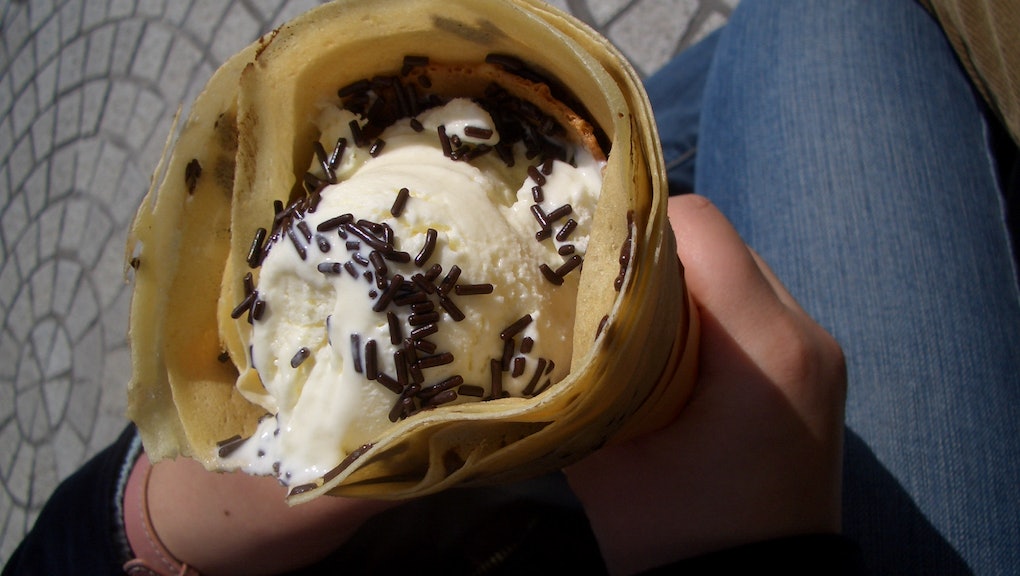 Is It Racist to Call Chocolate Sprinkles "Jimmies"?

I find sprinkles irresistible. I can't pass up the opportunity to top a sugar-laden ice cream cone with more festive sugar. "Jimmies," the New England term for chocolate sprinkles, used to symbolize summertime in Massachusetts for me.

That is until a well-meaning friend told 17-year-old me that the term "jimmies" is a racist one. The urban legend goes something like this: Someone, somewhere decided to call chocolate sprinkles "jimmies" because they are brownish-black — the name is meant to allude to Jim Crow laws.

I stopped ordering jimmies, opting for "chocolate sprinkles" instead. And I'm not alone.

Plenty of other Bostonians suspect that the term "jimmies" has racist origins, a Boston.com journalist reported in 2015. And Twitter users agree:

So, is this a sugar-coated urban legend, or actual racism? The fact-checking website Snopes revealed that jimmies' origins are steeped in mystery. The most popular (and oft-cited) theory is that candy company Just Born (better known these days as the company that makes Peeps) invented chocolate sprinkles and named them "jimmies" after an employee. According to the Boston Globe, company spokespeople have said the employee was named Jimmy Bartholomew, but there's no record of his existence anywhere.

Jimmy Bartholomew who? Some detective work reveals that Just Born probably didn't invent chocolate sprinkles. The Boston Globe noted the company was founded in Brooklyn, New York, in 1923, but a New Hampshire-based newspaper ran an ad featuring a dessert made with chocolate sprinkles in 1921. (Regular sprinkles were invented by French bakers in the 18th century and were called "nonpareils," the Mr. Sprinkles website noted.)

Regardless of the mysterious origins, the term "jimmies" still seems to evoke racism these days. "If something has a weird, diminutive name and it's only applied to the black, or chocolate, or brown thing, then it's just gotta be f*cking racist," Andrew Ti, host of the podcast Yo, Is This Racist?, said, said, noting he formed this opinion that jimmies are racist without looking anything up.

"If something has a weird, diminutive name and it's only applied to the black, or chocolate, or brown thing, then it's gotta be f*cking racist"

Krishnendu Ray, Associate Professor of Food Studies at New York University and author of The Ethnic Restauranteur, said in an email that words have life cycles.

"They are born, they grow old and they die, which is how a language stays relevant," Ray said, noting that language often reflects the changing ratio of power between people. As relationships change, language will also evolve, he said.

Words have life cycles. They are born, they grow old and they die, which is how a language stays relevant.

Ray said he wouldn't call sprinkles "jimmies" even though the evidence linking the term to Jim Crow remains unclear.

"I care about not offending people unnecessarily," he said. "Yet, I would also like to be forgiven if I have used it inadvertently and my intention was not to offend." Taking others' feelings and histories seriously is essential for having a meaningful conversation, he said.

Ray defers to "Yo Is This Racist's" Andrew Ti and his general rule: "If something has some sort of weird, diminutive name and it is only applied to the black or chocolate or brown thing," it probably has a racialized history and provides an interesting teachable moment about the power of naming people and things and the changing historical relationship between them," he said.

Several foods that still line grocery shelves have a racist history — notably, Aunt Jemima food products. Inspiration for the brand came from a minstrel song called "Old Aunt Jemima," the New York Times reported. And the logo evokes nostalgia for plantation life and the trope of "mammy, a devoted and submissive servant who eagerly nurtured the children of her white master and mistress while neglecting her own," the New York Times noted.

Even though it remains unclear whether "jimmies" has racists roots or not, the term is officially off the table for me. Sprinkles are sweet, but racism is the opposite of appetizing.