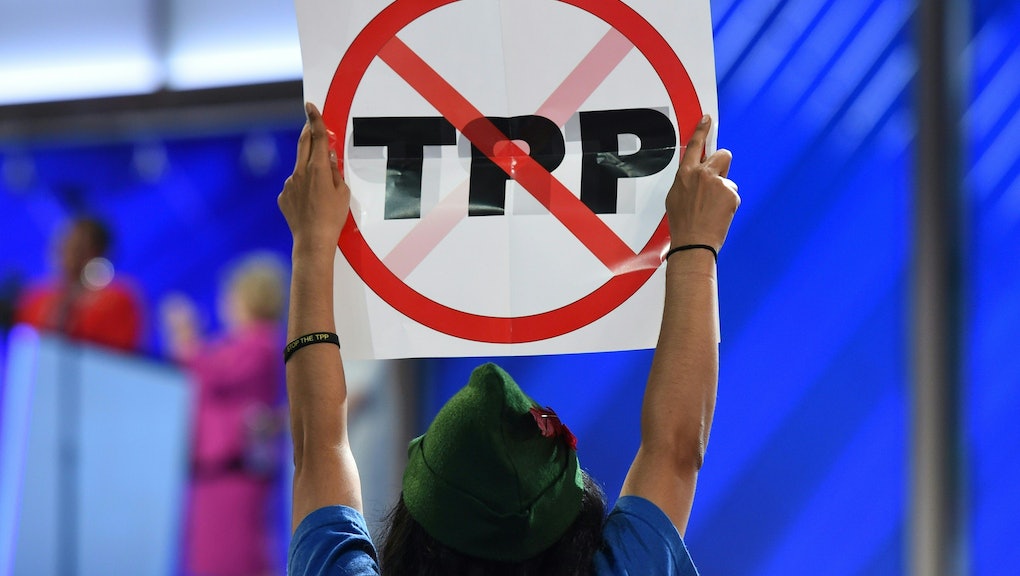 What Does TPP Mean, And What Did the Anti-TPP Signs Mean at the 2016 DNC Opening Night?

You may have seen protesters at the Democratic National Convention in Philadelphia holding up signs with the letters TPP crossed out and chanting, "No TPP!"

TPP is short for Trans-Pacific Partnership, an international trade deal signed by President Barack Obama in February that is awaiting congressional ratification to go into action.

Those in favor of the deal say it will unleash new economic growth among the 12 countries involved: the United States, Malaysia, Vietnam, Singapore, Brunei, Australia, New Zealand, Canada, Mexico, Chile, Japan and Peru.

Those protesting the agreement — among them conservatives like Donald Trump, who called the deal "a rape of our country," and progressives like Bernie Sanders and Elizabeth Warren — fear it could mean outsourcing of U.S. jobs. Critics also decry the shroud of secrecy that enveloped the years-long talks.

Hillary Clinton, as well as her VP running mate Tim Kaine, have had a change of heart concerning TPP.

In 2012, Clinton, then secretary of state, called the deal a "gold standard" in trade agreements. In October 2015, Clinton backed off this characterization, saying the negotiated deal "didn't meet her standards."