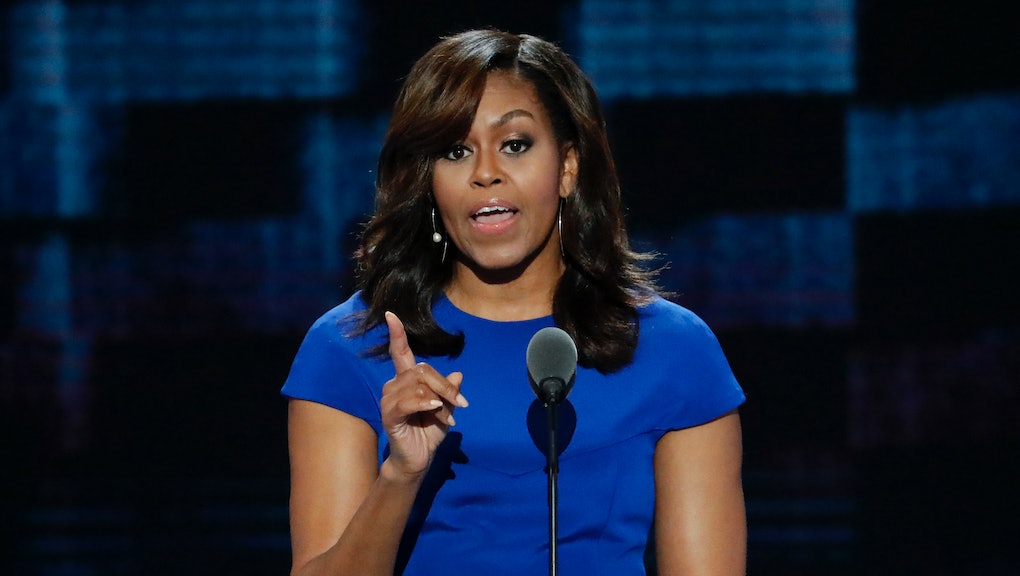 Michelle Obama at 2016 DNC: "I Wake Up Every Morning in a House That Was Built by Slaves"

In one of the highlight speeches of the first night of the 2016 Democratic National Convention in Philadelphia on Monday, first lady Michelle Obama took to the stage to ask voters whether they wanted their children to grow up with presumptive Democratic nominee Hillary Clinton or Republican nominee Donald Trump as a role model.

"In this election, and every election, it is about who will have the power to shape our children for the next four to eight years of their lives," Obama said. "I am here tonight because in this election there is only one person I trust with that responsibility, only one person who I believe is truly qualified to be president of the United States, and that is our friend Hillary Clinton."

According to Obama, the first family has faced barrages of hateful rhetoric aimed at her husband, President Barack Obama, and they have told their daughters, Sasha and Malia, "that the hateful language they hear from public figures on TV does not represent the true spirit of this country. How we explain that when someone is cruel or acts like a bully, you don't stoop to their level."

"Our motto is, when they go low, we go high," Obama said to a roaring crowd.

"I want someone with the proven strength to persevere," Obama continued, sharpening her criticisms of Trump. "Somebody who understand that the issues of our nation are not black or white. It cannot be boiled down to 140 characters. Because when you have the nuclear codes at your fingertips and the military at your command, you can't make snap decisions. You can't have a thin skin or a tendency to lash out. You need to be steady and measured and well-informed."

In one of the most memorable moments of this political season, Obama audibly choked up as she explained the importance of character this way: "I wake up every morning in a house that was built by slaves."

According to Obama, women like Clinton have helped show her children what once was is not what must still be.

"We cannot afford to be tired or frustrated or cynical," Obama concluded. "We need to pour every last ounce of passion into electing Hillary Clinton as president of the United States of America."