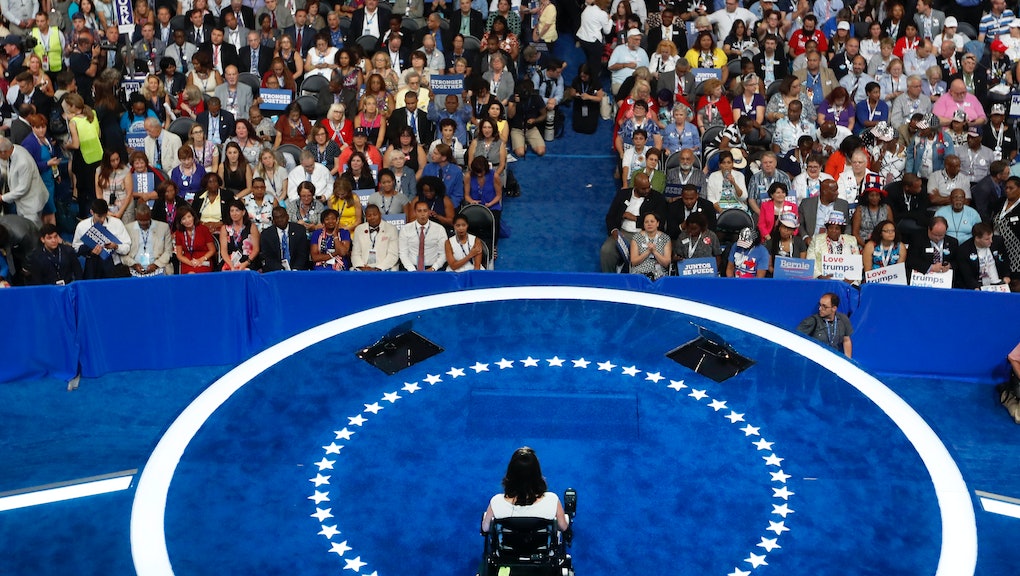 On Monday evening, in front of a jam-packed audience at the Democratic National Convention, disability rights advocate Anastasia Somoza gave a clear message to Donald Trump: She feels bad for him.

"Donald Trump has shown us who he really is, and I honestly feel bad for anyone with that much hate in their heart," Somoza, who has cerebral palsy, said. "He doesn't see me, he doesn't hear me and he definitely doesn't speak for me."

Trump, the GOP nominee for president of the United States, has a track record of mocking and denigrating those who disagree with him — including people with disabilities. He infamously mocked New York Times reporter Serge Kovaleski, who has arthrogryposis: At a rally in South Carolina on Nov. 24, Trump jerked his hand and bent his right wrist while imitating Kovaleski's physical condition.

As a point of contrast, Somoza — who is the child of immigrants from Nicaragua and Ireland — made heartfelt remarks in support for Hillary Clinton by highlighting how the presumptive Democratic nominee has spent her life promoting equal access to education and disabled people's rights. Somoza once interned for Clinton's U.S. Senate office and worked on her 2000 senatorial campaign.

Clinton "has never lost touch with people like me," Somoza said. "She has invested in me. She believes in me. And in a country where 56 million Americans with disabilities so often feel invisible, Hillary Clinton sees me. She sees me as a strong woman, a young professional, a hard worker and the proud daughter of immigrants."