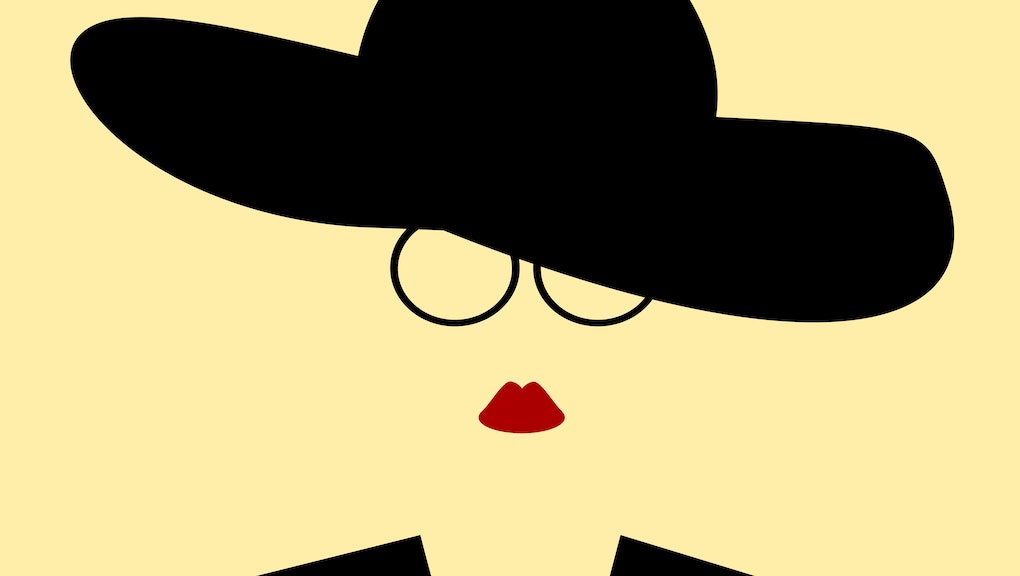 The Sordid, F*cked Up History of Red Lipstick

People have a lot of feelings when it comes to red lipstick.

It's true that it's a daring look, embraced by people with a certain level of self-assurance, and with the confidence to leave their mark on every coffee cup they sip from. Think Marilyn Monroe and Rita Hayworth, or Beyoncé and Janelle Monáe.

Although it is considered an undoubtedly glamorous look, it certainly wasn't always that way. The history of red lipstick is, to say the least, highly disturbing, involving tales of both poison and witchcraft. But despite its weird past, it lives on on the lips of some of our beloved icons like Rihanna, for instance, and that alone means it should be celebrated.

In ancient civilizations, red lipstick could basically kill you.

Lipstick as we know it was created thousands and thousands of years ago, and popularized around 2500 B.C. thanks to the Sumerian ruler Puabi of Ur, who was frequently depicted with stained lips in the ancient era, according to the Toast. The first documented lip tint was a red one, and it was made from pulverized red rocks and white lead. As the Toast noted, "This was not the last time people were like, 'Check out all this sweet lead! Hey, what if we put it on our mouths oh god I'm dying.'"

And this is very true. In fact, many of the earliest red lipsticks were made of things that could eventually kill you. In ancient Egypt and Mesopotamia, both women and men would crush semi-precious stones, with Cleopatra famously crushing up beetles and ants in order to get just the right shade of blood red.

In fact, the term "Kiss of Death," according to Elle, was coined during this era because of the highly toxic mixture of fucus-algin, iodine and bromine mannite that was commonly used to make red lipstick. Oh, and to get a shinier texture, Egyptian people ground up fish scales. Sexy, right?

By the 1500s, people started to believe that red lipstick could ward off death — and boy, were they wrong.

Thankfully, by the 16th century, the process of making (and wearing) red lipstick had gotten safer, with regions across England finally realizing that, hey, maybe we can make this stuff out of natural shit instead of toxic chemicals? Once they did just that, by creating red lipstick made with herbal and plant-based dyes, red lipstick started to become more popular.

So popular, in fact, that Queen Elizabeth I, who was already known for her love of cosmetics, added rouged lips to her signature look, in addition to caking her face with white powder. Then, probably due to her perennially youthful appearance (save for when she wiped off all the makeup, probably), medieval Europeans started to believe that red lipstick could ward off death.

Of course they were very wrong. Very, very wrong. The lipstick that Elizabeth wore every single day is widely rumored to be what ended up killing her, because it contained white lead. When she died, she reportedly had multiple layers of the stuff on her lips.

In the 1700s and 1800s, red lipstick meant you were a witch and an unworthy whore, basically.

After that whole saga with Queen Elizabeth I, red lipstick waned in favor due to Europeans associating it with questionable morals. In the years following her death, wearing very bright red lipstick was viewed with disgust in England and Ireland, and applying it in public was even worse.

According to the Toast, by 1770, British Parliament officially declared that women who wore bright lipstick and seduced men by flaunting it would have their marriages annulled and also be accused of witchcraft. Heavier cosmetics, such as red lipstick, were really only for women of the night.

However, as is always the case, rich people in France were too busy having sex in the 1700s to really care about witchcraft. Over there, wearing red lipstick was encouraged for upper-class women, as women who didn't wear makeup were seen as peasants and prostitutes.

As the 1700s turned into the 1800s, though, distaste for red lipstick only grew in British Parliament and royalty, with Queen Victoria proclaiming that wearing red lipstick was impolite, and so it became entirely unfashionable in the little ol' United Kingdom. In fact, it had become so taboo that when French movie star Sarah Bernhardt made a habit of applying her red lipstick in public, people freaked the fuck out.

My, how the times have changed.

In the early 1900s, red lipstick was for bold women only.

Bernhardt's bold statement came at a good time. At the turn of the century, lipstick was now being created with beeswax and castor oil, two things that are far less dangerous than lead. Now that women weren't dying because of red lipstick, it could safely come back into vogue, and Bernhardt seemed more than happy to become the most famous admirer of the lip shade, going so far as to call it her "love pen." With Bernhardt's rising reputation as a glamorous yet independent woman, appeal for red lipstick grew, so despite public perception, now women themselves wanted to wear red lipstick. And cosmetic companies, seeing this grand opportunity, were determined to make that happen.

Before the 20th century, lipstick was often wrapped in silk paper, so in 1915, when first metal tube of red lipstick was manufactured, it seemed like a godsend. Now, millions of women had access to this bold new cosmetic, which was handy because this just happened to be an era when more women than ever before were in the public eye, fighting for their right to vote.

"The first and most famous manifestation of red lipstick was in fact in New York when the suffragettes took to the streets, banded together, and as part of their defiance and fight for the vote, they all wore bright red lipstick," Madeleine Marsh, the author of Compacts and Cosmetics, told WNYC.

Given that the deep shade of red was gaining traction among independent women, cosmetics companies like Chanel, Elizabeth Arden and Max Factor, who was one of the most coveted makeup artists Hollywood had, jumped at the chance to capitalize on this market of brave women, with Arden herself handing out lipstick to marching suffragettes.

At that point, red lipstick signaled a type of independence, and soon enough, those suffragettes would be wearing it alongside Old Hollywood starlets like Clara Bow and Greta Garbot.

In the mid-1900s, Hitler hated red lipstick, so of course women loved it.

By the 1940s, red lipstick had officially become a Hollywood staple, and a signifier of any and all sex symbols. It also didn't hurt that Adolf Hitler had voiced his distaste for the bright red shade, effectively turning wearing red lipstick during WWII into a political statement.

So, while Hitler seethed, women like Marilyn Monroe, Rita Hayworth and Elizabeth Taylor pranced around in their own signature shades of red, along with women who had joined the war effort themselves.

According to the Toast, "while red lipstick has always been a symbol of status, sensuality, and the desire to smear stuff on your face, it did take on a slightly different role during WWII — for women working in roles that were traditionally of a more 'masculine' bent, the lipstick was a way to reinforce traditional femininity while also giving women something that gave some sense of normalcy."

By the late-1940s, 90% of American women wore lipstick of one shade or another, and in the infamous poster encouraging women to chip in during the war, called "Rosie the Riveter," Rosie is, of course, wearing red lipstick.

2000s: At last, red lipstick means nothing more than that you have good taste.

Thankfully, as the 20th century turned into the 21st, red lipstick has only grown in popularity, allowing more and more women access to the brightest shades of red than ever before, so women around the world can channel their inner Marilyn... or Gwen Stefani... or Beyoncé.

Red lipstick now even has a place in pop culture, with women like Rihanna recording songs titled, "Red Lipstick," and songwriters, like Taylor Swift, penning iconic lyrics like, "I got that red lip, classic thing that you like." For some artists and actresses it's a signature, from Swift to Stefani. Now, it's viewed much less seriously than it used to be, seen as merely just another shade of lipstick that women have free rein to choose from.

Although red lipstick comes with a dark, twisted history involving death and witchcraft, you've got to admit that the world is better for it.