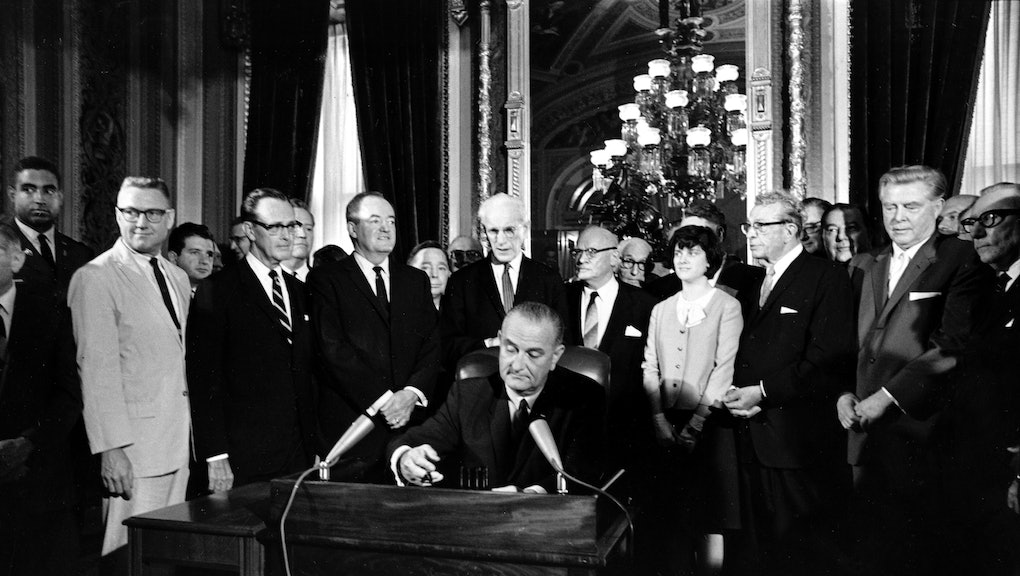 What Is the Voting Rights Act? Here's Why the Legislation Still Matters, 51 Years Later

As soon as the DNC is over, the presidential candidates will start campaigning all over the country to get people to vote for them on November 8.

But voting rights weren't secured for everyone, especially not for African-Americans, until only 51 years ago.

On August 6, 1965, a piece of U.S. legislation was enforced by President Lyndon B. Johnson that would clear the path for African-Americans to exercise their right to vote: the Voting Rights Act.

Although the 15th Amendment to the U.S. Constitution, ratified at the end of the Civil War in 1870, was meant to secure voting rights for every American citizen regardless of their "race, color or previous condition of servitude" — it didn't. Southern states especially relied on discriminatory practices to keep black citizens away from the ballot box or even from the registration desk:

They faced poll taxes and literacy tests. They risked intimidation, financial retaliation and even violence when trying to register or vote.

The Civil Rights era brought new attention to the topic of voting rights, which came to a head in March 1965 when state troopers attacked peaceful marchers in Selma, Alabama.

The incidents in Selma led President Johnson to take action on the matter. He pushed the bill through Congress in only four months, and signed the act into law five months later.

"So let me now say to every Negro in this country," Johnson said in his speech that day. "You must register. You must vote. You must learn so your choice advances your interest and the interest of our beloved nation."

Was the Voting Rights Act from 1965 a success? There have been legislative attempts to undermine it. And its infringements have disproportionately targeted minority groups like African-Americans and Millennials.

Texas tried to enforce Voter ID Laws that would have required voters to present a list of ID cards such as a U.S. military ID, a birth certificate, a passport or a concealed carry permit. In July the 5th U.S. Circuit Court of Appeals found the requirements to be discriminatory against racial minorities, especially to those who are black.

After the election of President Barack Obama and major Democratic gains, stricter requirements around voter identification arose across the country.

In addition to that a report by the New York University School of Law's Brennan Center for Justice showed in March that also Millenials and Gen Xers face various obstacles to voting. It found that they are three-to-four times more likely to have to wait in line than older voters. And they were largely shut out of the primaries because of their tendency to identify as independents rather than joining a party while registering.

This year, as Barack Obama leaves office and black Americans still face tremendous disadvantages and discrimination, the 51st anniversary of the Voting Rights Act is not only a reason to celebrate but a reminder that voters rights are still something some have to fight for every day.

Your vote matters. Get registered here!