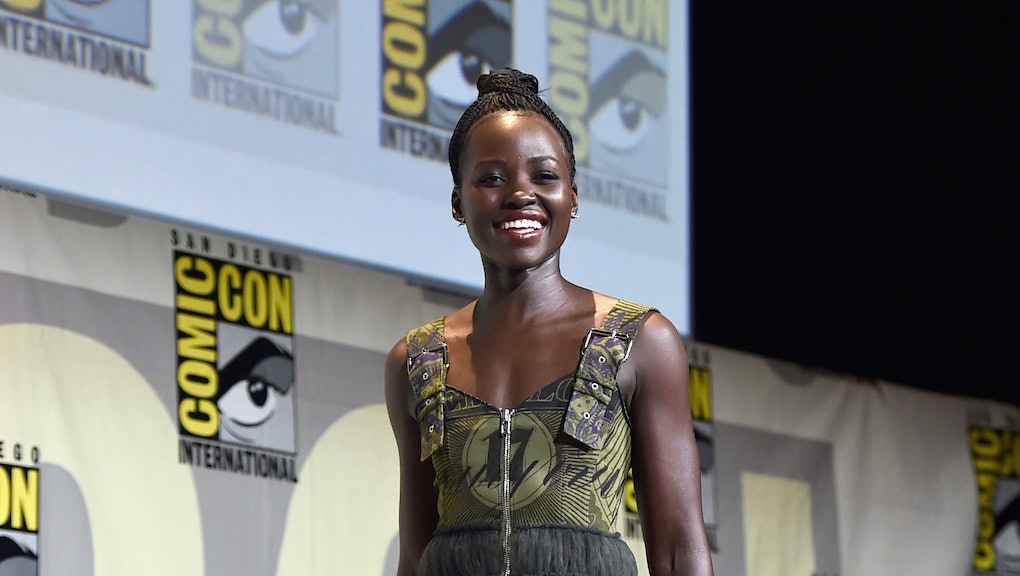 After Black Panther (Chadwick Boseman) stole the show from the plethora of other superheroes in Captain America: Civil War, fans have eagerly awaited Marvel's foray into the politics of the fictitious African nation Wakanda in the his solo film. While the self-titled Black Panther is a ways off — the film is slated for a 2018 release — the cast and crew still entertained fans during a panel at San Diego Comic-Con. In fact, they might have said a little too much.

Lupita Nyong'o, one of the actors signed on for Black Panther, teased some details about the film's plot while speaking with a Marvel.com correspondent. (To get to that part of the video, skip to about the 1 hour, 56-minute mark of the livestream below.)

"The story is that the Black Panther's leadership is being threatened by two foes that come together, and so Black Panther gets the help of the CIA and the Dora Milaje to try and defeat the enemy," Nyong'o said. "Oh dear. ... Someone is going to fire me shortly. I have to shut up now."

It might not seem like much — it's just a sentence of information — but casting news and hints from previous Marvel movies can paint a likely picture of where some of the characters will piece together.

Let's start with the most obvious. Nyong'o and The Walking Dead star Danai Gurira are set to play members of the Dora Milaje, Black Panther's elite, all-female bodyguard group. Some of those bodyguards made a very brief appearance in Civil War, though not Nyong'o and Gurira.

Then, there are the two united foes for T'Challa. One of them is confirmed to be Black Panther's longtime comic book nemesis Erik Killmonger, who'll be played by Creed star Michael B. Jordan. The second may be another returning antagonist from the Black Panther comics, Ulysses Klaw (Andy Serkis). Klaw makes a brief appearance in Age of Ultron, where it's revealed that he's a notorious smuggler of the fictitious metal vibranium — the precious, rare material that comprises Captain America's shield, and can only be found in Wakanda.

But it would be strange for Marvel to include a Black Panther-centric villain for such a brief cameo in Age of Ultron and have him never return — especially since the character loses part of his arm in the film, which is how he attains his prosthetic device with a sonic emitter in the comics (in short: so he can put up a real fight against superpowered heroes). Klaw should return, but we'll have to wait and see.

Finally, the CIA help that T'Challa receives may come in the form of Everett Ross (Martin Freeman), who isn't technically CIA but is a generically secretive U.S. government lackey. Moreover, the duo are longtime allies in the comics, with T'Challa going so far as to anoint Ross as the Regent of Wakanda in his absence. If that's not enough of a telling sign — do you really think Marvel would bring in an actor of Freeman's caliber for a one-off role in Civil War?

Still, Nyong'o's admission — like any news about Black Panther before it's made official — should be taken with a grain of salt. But there's no denying the hype: With its impressive and diverse cast, Black Panther is poised to be, as fans have hoped, quite lit.