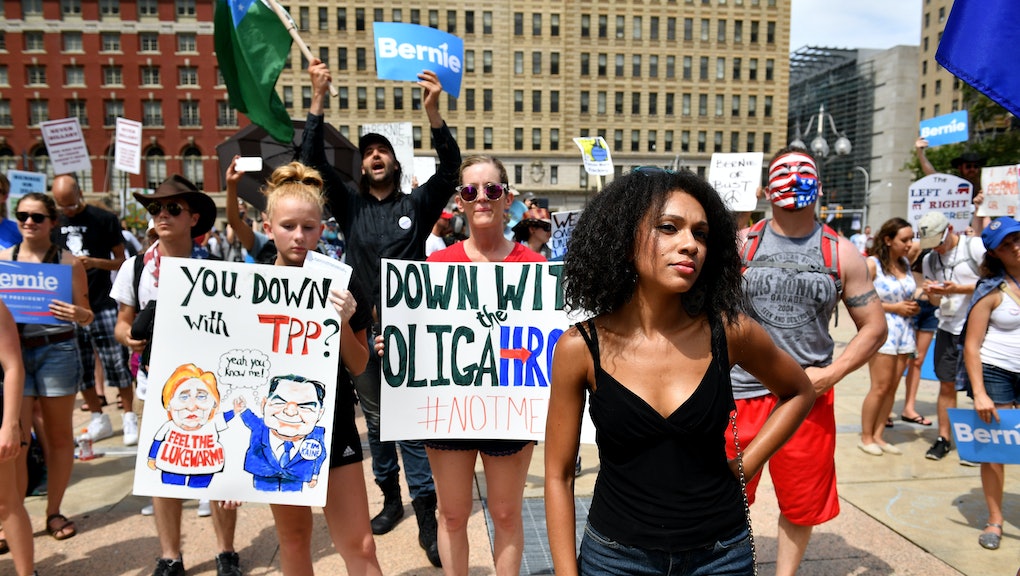 At the DNC, Bernie Sanders Die-Hards Turn to Jill Stein — and Focus on the Grassroots

PHILADELPHIA — Sen. Bernie Sanders' most fervent backers are showing no interest in heeding his call to unite the Democratic Party behind Hillary Clinton.

Sanders' speech to delegates on Monday, in which he said "Hillary Clinton must become president of the United States," did not convince his small but vocal core of supporters to abandon its cause. On Tuesday morning, a group of several hundred organizers, delegates and voters held a rally across the street from City Hall in downtown Philadelphia, protesting Sanders' treatment by the Democratic National Committee and chanting anti-Clinton slogans. Later in the day, Sanders delegates staged a walkout after Clinton officially secured the nomination to protest their treatment by the DNC.

But what do these progressives actually want? What are their goals, and how do they compare with those of Sanders supporters who remain loyal to the Democratic Party? Will they be able to sustain the momentum of the Sanders candidacy? Where does each group direct their energy now, with Clinton as the nominee of a party they despise?

In interviews, demonstrators and delegates — both Bernie or Bust-ers and Democrats who have reluctantly come around to Clinton — were eager to detail the path forward. The former said their primary goal was to rally progressive support behind the presidential candidacy of Dr. Jill Stein of the Green Party, jettisoning the Democratic Party altogether for their perceived slights against Sanders. The latter said their primary objective was to organize and fundraise for progressive candidates in local, state and congressional races across the country who feel the Bern — and will carry the torch.

Time to bust: Li Seay, a 28-year-old activist from Richmond, Virginia, was the official host of the rally on Tuesday, introducing speakers and musical acts to the energetic crowd in the 90-degree heat. In an interview shortly before Stein took the stage, Seay said she believed Sanders' most ardent backers will abandon the Democratic Party because of Sanders' treatment in the primaries.

"There's going to be a 'Dem-exit' — a mass de-registration from the Democratic Party, and a huge push to go Green," Seay said, when asked what is next for the movement. "We're really going to push Jill 2016. If you want someone who's just as progressive as Bernie, you've got that in Jill Stein."

However, the Pew Research Center recently found that 90% of Sanders most enthusiastic voters plan to cast ballots for Clinton in November. The Bernie or Bust movement therefore represents a small portion of the overall electorate — but in a close election, several thousand votes could mean the difference between a President Clinton or a President Trump.

The Green Party is capitalizing on the disaffection among those in the Sanders ranks. Meleiza Figueroa, press director for the Stein campaign, said in an interview offstage that the campaign "was growing faster than I could have even imagined."

"In the first 24 hours after Bernie Sanders' endorsement of Clinton, all of our campaign activity grew 10-fold," Figueroa said, as cheers of "Jill, not Hill!" rang out from the crowd. "We had 10 times the donations, 10 times volunteer sign-ups... It's really becoming exponential."

Back to the grassroots: Beyond the presidential race, the Sanders crowd is hoping to organize on the state and local level to sustain their progressive movement. For those who will support Clinton as the nominee, this is the primary aim going forward.

"The rest of the revolution will continue to follow Bernie's lead."

Three Sanders delegates from Oklahoma mingled behind the stage, eager to detail their plans to channel the energy and organization of the Sanders effort into installing progressives on school boards and other local offices.

"The people that are Bernie or Bust need to understand that this movement is about local politics and down-ballot candidates," Tiffany Graves, a 37-year-old attorney from Tulsa, said. "That, in my opinion, was what Bernie was trying to accomplish all along. The White House would have been a great extra prize for him, but the real change is going to come on the local level. I'm not sure everyone understands that."

Suzanne Bloomfield, a 56-year-old stylist, downplayed the idea that Sanders supporters would flee the Democratic Party.

"After all this is said and done, they'll come back to the revolution," Bloomfield said. "I don't think they're necessarily leaving. They're just leaving Hillary. They're just not going to stay for her. I believe the rest of the revolution will continue to follow Bernie's lead."

Bloomfield cited Sanders' plans to campaign for like-minded candidates throughout the fall, and form a group to support progressive causes and politicians across the country.

Bruce Niemi, a 67-year-old Sanders delegate from Tulsa, said he believed a continued grassroots effort will be instrumental in selecting the party's next presidential nominee, whether in 2020 or 2024.

"We're grassroots kind of people. So I think people will rise to the top like cream, who can be available for nomination in 2020," Niemi said, specifically mentioning Sen. Cory Booker's speech as an example of a candidate on the rise.

Asked whether he would vote for Clinton, Niemi answered with a response that the Bernie or Bust-ers in his party seldom utter.