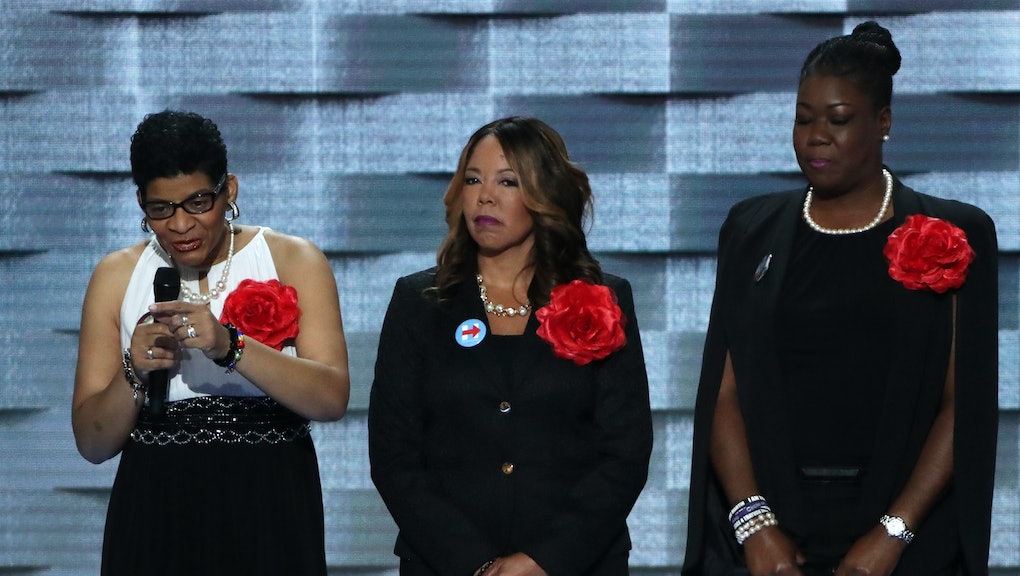 Sybrina Fulton at DNC 2016: "I Am Here Today for My Son Trayvon Martin"

Sybrina Fulton, whose son Trayvon Martin was shot and killed by neighborhood watchman George Zimmerman on Feb. 26, 2012, addressed attendees at the 2016 Democratic National Convention as part of the night's "Mothers of the Movement" segment.

"I did not want this spotlight, but I will do everything I can to focus some of this light on the pain of a path out of the darkness," she said on stage with a group of several other mothers who have lost their sons due to racial violence or police brutality.

"Hillary is one mother who can ensure our movement will succeed," she continued. "Hillary Clinton has the passion and understanding to support grieving mothers. "She has the courage to lead the fight for common sense gun legislation."

"This isn't about being politically correct," she said. "This is about saving our children. That's why we're here tonight with Hillary Clinton. And that's why in memory of our children, we are imploring you, all of you, to vote this Election Day.

Fulton's son Trayvon was only 17 years old when he was killed in Sanford, Florida, and every year since then, activists remember his birthday and the day of his death. Martin's death also brought to light several structural inequalities that make it much more difficult to succeed while black in the United States. And activists have sought to change the way officers police communities of color and "stand your ground" laws.

Zimmerman was acquitted of any wrongdoing on July 13, 2013, and protesters flooded streets from California to New York City to protest the decision. That night is widely considered the birth of the #BlackLivesMatter movement.

In the time since his acquittal, Zimmerman's name has repeatedly been in the headlines. Most recently, he tried to auction off the gun he used to kill Martin.

Watch the mothers of the movement speak here: