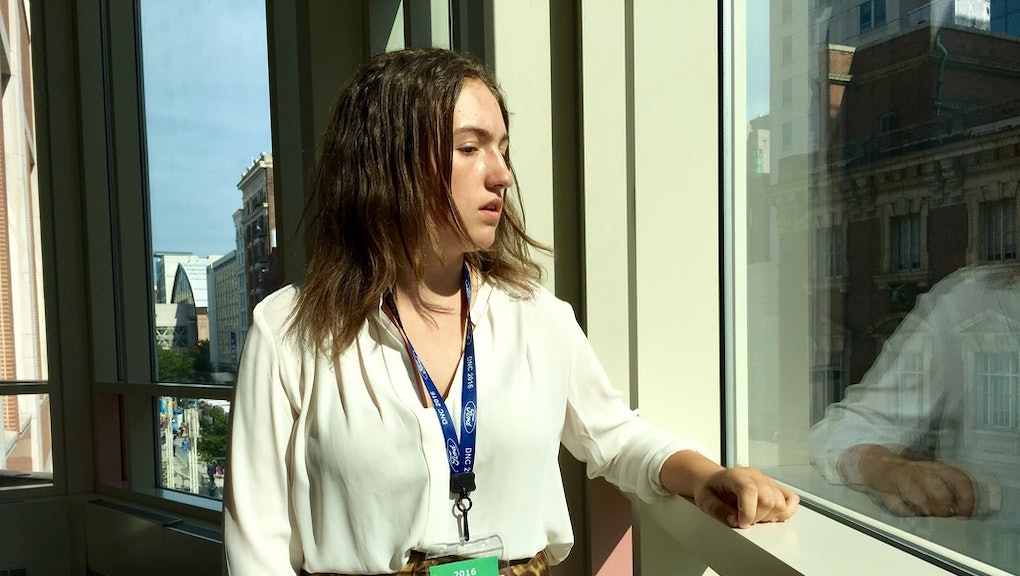 PHILADELPHIA — A year ago, Hannah Zimmerman was sulking in her room with a bad case of Netflix and no chill. What, she wondered, was she doing with her life?

Today, after organizing high school students for Sanders in New York and nationally, Zimmerman is at the Democratic National Convention as a member of the credentials committee — giving her honorary delegate status although at 16, she's not even old enough to vote.

Zimmerman says she owes it all to the Vermont senator who took on Hillary Clinton — and that the ideals that drove the Sanders "revolution" might some day drive her own.

"He got us to think differently, and I think you will see that in our next generation of leaders," Zimmerman said in an interview as the party geared up for day two of the convention — including the roll call vote that made Clinton the first woman to earn the Democratic nomination.

"I think Bernie made it okay for you to be a socialist again. I strongly believe that. He made it, in fact, even kind of cool to be a socialist," she said. "And I think that's really great, because many people just sort of saw 'socialism' as a very scary word, when in fact it's a great system of government."

Zimmerman doesn't consider herself a "Bernie or Bust" type. If she were eligible to vote, she would — unlike many other diehard Sanders believers — heed his call to support Clinton to prevent a Donald Trump presidency.

But she's simply not moved by Clinton the same way she is by the gentleman from Vermont.

"In my case, Hillary Clinton was elected [to the Senate] when I was two-and-a-half, so it didn't make much of a difference," Zimmerman said.

And while the Brooklyn-raised Sanders "was a city kid, like us," Zimmerman said, Clinton, who moved to New York after her husband left the White House, had a certain carpetbagger air about her.

Zimmerman counts women's issues as one of her top concerns, but said Sanders' respect for women and their inclusion in his campaign left her with no qualms about not supporting the would-be first female president.

Clinton, said Zimmerman, is just too measured in comparison to the harder-left Sanders when it comes to everything from raising the minimum wage to banning hydrofracking and the death penalty.

"As kids growing up in a post-9/11, post-stock market crash world, we wanted that radical change, because all we've seen in our lifetime is radically bad things happen to us," said Zimmerman. "My parents couldn't even explain to me why we were in the Iraq War when I was five and asked about it."

With Clinton now poised to go into battle for the party, Zimmerman has shifted her work from a Sanders-specific focus to organizing young progressives at large.

Zimmerman hopes to attend Stanford and then go on to some form of public service. One option: Election as New York's first democratic socialist congresswoman.

"When many of my friends' parents lost their jobs in 2009, I couldn't really understand what was going on," she continued. "And we kept being told by politicians [that] if we just stayed on the right track and didn't push too hard, things would get better. ... Bernie Sanders is really able to speak to us a way that no politician has ever done before."

Asked what she's learned about politics and activism from the Sanders 2016 campaign, she replied, "Compromise only comes from extreme candidates."

Someday, she may be one herself.