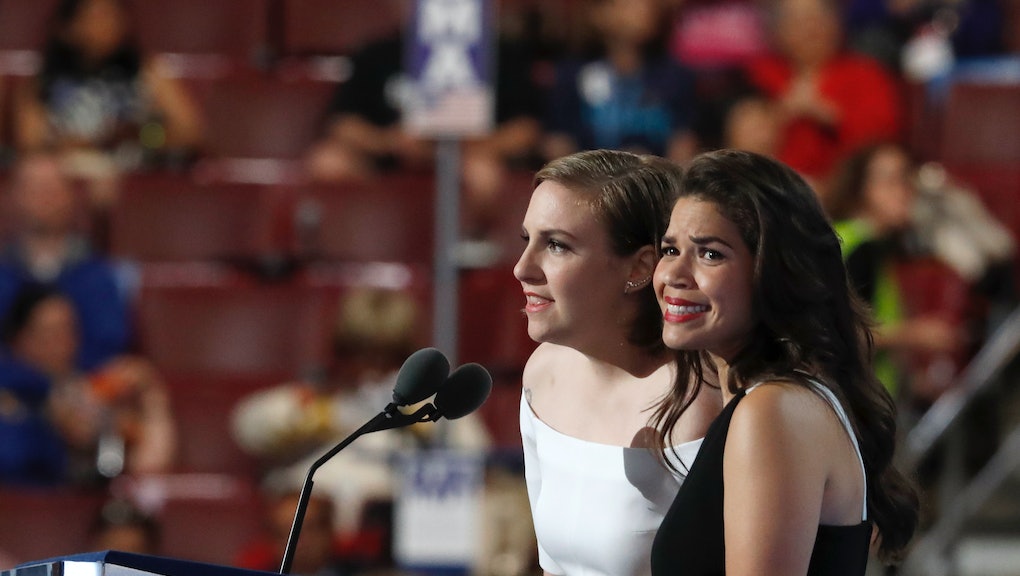 Actress and writer Lena Dunham and actress America Ferrera took the stage at the Democratic National Convention in Philadelphia on Tuesday to issue a withering critique of Republican nominee Donald Trump.

"Hi, I'm Lena Dunham and according to Donald Trump, my body is probably like a two," said Dunham.

"And I'm America Ferrera, and according to Donald Trump, I am probably a rapist," Ferrera added.

The dressing down continued from there, mocking Trump's affinity for Barack Obama citizenship conspiracy theories, his views on women and whether or not his campaign slogan "Make America Great Again" really means "Making America Hate Again."

"I am a pro-choice, feminist, sexual assault survivor with a chronic reproductive illness," Dunham continued. "Donald Trump and his party think I should be punished for exercising my constitutional right. His rhetoric about women takes us back to a time when we were meant to be beautiful and silent. Meanwhile, 22 years ago, Hillary Clinton declared that women's rights are human rights, and she made it possible for my fellow sexual assault survivors in my home state of New York to have immediate access to care in any emergency room."

"Hillary knows that access and opportunity are the american process, not transphobia, Islamophobia, xenophobia, and systemic racism," Dunham added.

"Donald is not making America great again; he's making America hate again," added Ferrera. "The vast majority of us, we cannot afford to see his vision of America come to be."