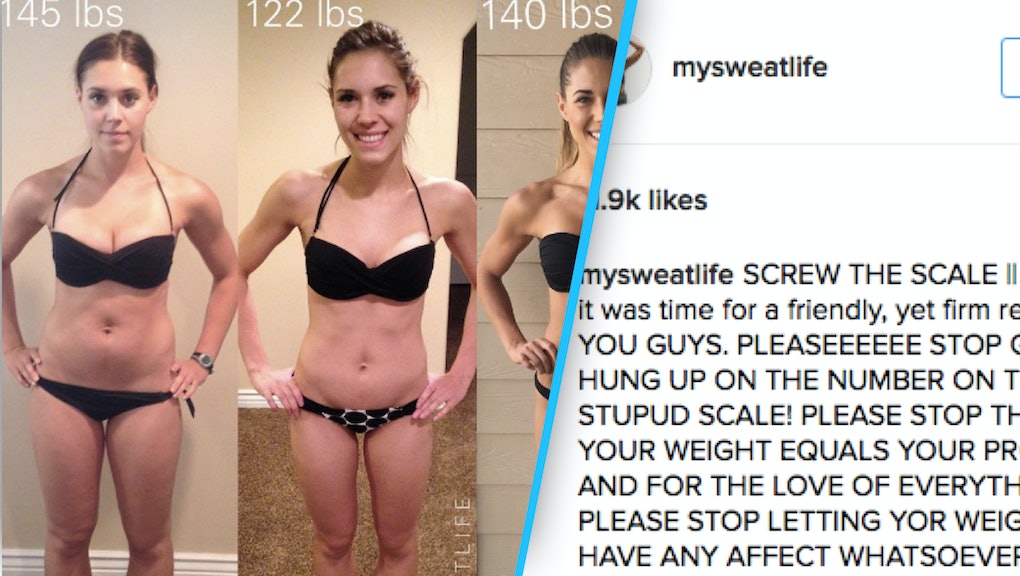 Kelsey Wells, an Instagram fitness star and new mom, has gained a massive online fanbase of more than 300,000 followers — because she's kept it honest.

While pregnant she gained more than 50 pounds, and over the past 80-plus weeks she's been documenting her journey to lose that weight. Although the most common pictures on her Instagram involve her flexing next to a baby carriage or taking a selfie at the gym, she decided to honor her 84th week of intense fitness by dropping a truth bomb.

In an Instagram post on Tuesday, she reminded everyone to stop stressing about the number on that scale, because that's really got nothing to do with how healthy you are, or the progress you've made so far.

"Please stop thinking your weight equals your progress and for the love of everything please stop letting your weight have any affect whatsoever on your self-esteem, like I used to," she pleaded to her followers.

Then she showed them what she really means, posting side-by-side photos of herself at different weights. The images compare Wells' body at her lightest (122 pounds) to her body now (140 pounds). Although she has gained 18 pounds, at 140 pounds she actually appears healthier, with toned legs and a ripped stomach.

"I weighed 130 before getting pregnant, so based on nothing besides my own warped perception, I decided my 'goal weight' should be 122 and to fit into my skinniest jeans," she continued. "Well after a few months of [working out] and breastfeeding, I hit it and I fit into those size 0 jeans. Well guess what? I have gained 18 pounds since then. Eight freaking teen."

As Wells notes in her post, which has so far been liked more than 12,000 times, many people trying to lose weight (including herself) focus on the numbers, when there's really so many other factors to consider. There's just no good in trying to equate weight with progress — or self-worth at all.

"According to my old self and flawed standards, I would be failing miserably," Wells went on. "Thank goodness I finally learned to start measuring my progress by things that matter — strength, ability, endurance, health, and happiness."

The real point here? Your weight means basically nothing, and is not an indicator of your health or wellness. In Wells' words, sometimes you just gotta say "#ScrewTheScale."

"Last week when I stepped on the scale, I said 'Screw you,'" Wells concluded. "And I think you should probably say the same to your scale too."

By talking honestly about weight loss, weight gain and fitness, Wells joins the many other popular Instagram stars who are slowly pulling back the curtain to reveal the realities of fitness. In February, one fitness advocate revealed the behind-the-scenes reality of before-and-after photos (spoiler: they're bullshit) and in May, a fitness model revealed the power of a really good angle.

So, although following a fitness star on Instagram can certainly be guilt-inducing, at least there are now women like Wells who encouraging us all to be a lot less hard on ourselves.