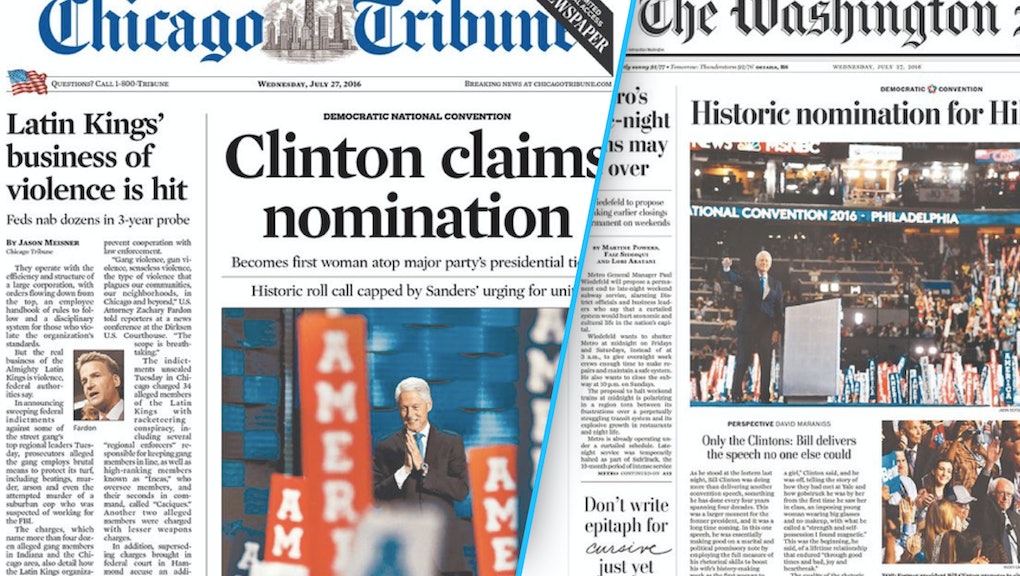 Hillary Clinton Won a Historic Nomination. So Why Is Bill Clinton on Every Front Page?

Hillary Clinton made history Tuesday night by becoming the first female candidate from a major political party to officially clinch a presidential nomination.

But on Wednesday morning, a curious thing happened: The world woke up to the face of her husband, Bill Clinton, plastered on the front of dozens of daily newspapers around the country.

Headlines on front pages declared "Historic Nomination" (The Washington Post) and "Change Maker" (Arizona Republic). But photos beneath these headlines showed Bill Clinton waving to the crowd assembled for the second night of the 2016 Democratic National Convention in Philadelphia. In some of the more unfortunate pairings, headlines like "Clinton Claims Nomination" in the Chicago Tribune and "Clinton Makes History" in the Houston Chronicle featured Bill Clinton. Hillary Clinton is nowhere to be found.

The reaction was swift on Twitter. BuzzFeed News' Anne Helen Petersen summed up the front pages as "simple proof of enduring sexism."

Why did this happen? Print media outfits face strict press deadlines that likely made the image selection process more difficult. It was close to midnight, after all, when Hillary Clinton finally appeared via livestream to address the DNC on Tuesday. It's not common practice to use a file photo, as News Genius' Leah Finnegan pointed out, and "a live video screen doesn't make for a great photo opportunity," as the Washington Post noted. Plus, "Bill Clinton's speech was clearly the big moment of the night."

Many papers — including the Wall Street Journal, as WSJ's Byron Tau tweeted — put Hillary Clinton's photo in their late editions.

The damage was already done. Print deadlines undoubtedly played a role in the images the papers in question ultimately ran. But at the end of the day, it's difficult to ignore that the media coverage of Hillary Clinton's campaign has been demonstrably more negative in tone and less issue-focused than that of her male competitors, and to many, Wednesday morning's front pages appeared to be more of the same.

Even worse, the photos unintentionally exemplified the same issues of representation and sexism around which Clinton has built her campaign.

Consider as well the implications of using a straight white man to represent Hillary Clinton's historic moment. Featuring Bill Clinton, even as a former president and the United States' first potential "first gentleman," diminishes the marginalized communities the Clinton campaign has rallied around, groups that have taken center stage at the DNC this week.

As Talking Points Memo's Katherine Krueger pointed out, even if the photo choices have an easy explanation, "the optics are very bad."

This election year, it's no coincidence that Trump has been able to wield the media as a weapon for his own advancement, while Hillary Clinton has struggled to be fairly represented. Wednesday morning's front pages might be easily explained, but to a generation unaccustomed to the peculiarities of old-fashioned newspaper production, they symbolized a struggle Hillary Clinton has faced her entire campaign — and the institutionalized sexism this country still has yet to overcome.