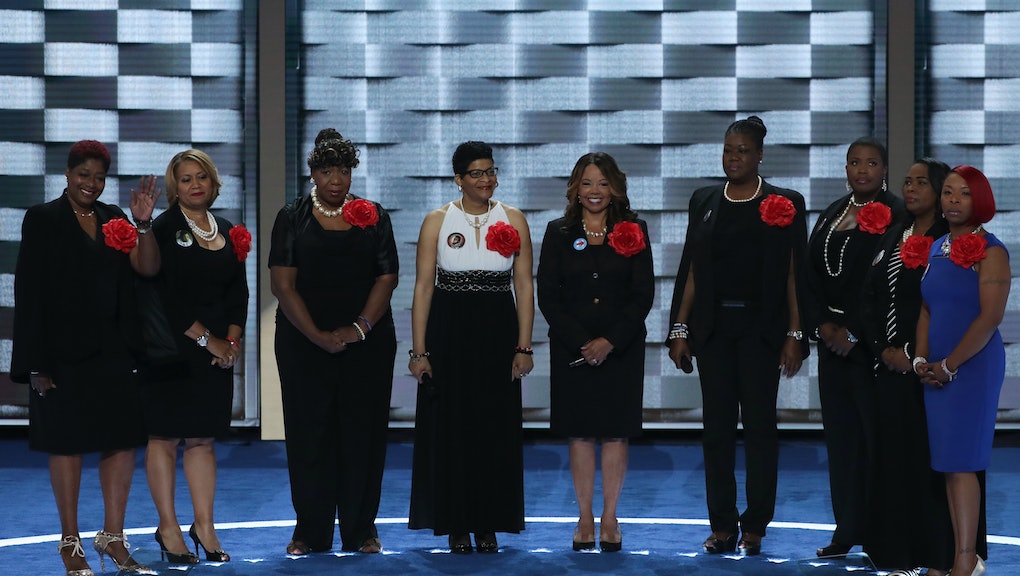 On Tuesday night, the Mothers of the Movement, an organization for the grieving mothers of black youth killed by police, stood on stage at the Democratic National Convention in Philadelphia and delivered a powerful message that brought the audience to its feet.

"You don't stop being a parent when your child dies," Lucia McBath, the mother of police shooting victim Jordan Davis, said in her speech. "I am still Jordan Davis's mother. His life ended the day he was shot and killed for playing loud music. But my job as his mother didn't."

The women's speech demonstrated the power that grieving mothers have to make the trauma of violence immediate and relatable, even to those who have never directly experienced it. The Mothers of the Movement are part of an extensive tradition of grieving mothers inciting political action in the name of justice.

Shannon Watts, a mother of five and founder of the nationwide grassroots anti-gun violence movement Moms Demand Action for Gun Sense in America, has never been directly impacted by police brutality or gun violence. Yet when she led a delegation with hundreds of activists to the convention, she was incredibly moved by the women's speeches.

"No one can imagine the loss of her child, that's the worst pain there is," Watts said in a phone interview. "When you're coming from a place of wanting to protect children, you're heard differently."

In the Middle East, Robi Damelin, 72 ,an Israeli woman and fellow activist whose son was killed by a Palestinian sniper, was similarly moved by the Mothers of the Movement's speech.

"Every mother who loses her child has the same pain," Damelin said in a phone interview. "Out of the whole family I think that mothers are the most powerful because all people can relate to their pain."

"Every mother who loses her child has the same pain."

Damelin is a member of the Parents Circle Family Forum, a grassroots group of around 600 bereaved Palestinian and Israeli families devoted to reconciliation and reducing violence. She was an anti-Apartheid activist in South Africa before immigrating to Israel when she was 21. She joined the group after 2002, when her son David was killed by a Palestinian sniper.

Through her work, Damelin has noticed mothers have a unique ability to transcend cultural barriers and facilitate difficult conversations about identity and violence. She said that while many Israelis struggle to see the humanity of the Palestininans as a group, when they speak to a Palestinian mother and hear her personal story firsthand, they are able to empathize in ways they couldn't before.

"Even people who don't recognize the humanity of Palestinians recognize the humanity of Bushwra [Awad, a Palestinian mother from the PCFF whose son was killed in 2008," Damelin said. "Even in South Africa, where I'm originally from, the black moms involved with reconciliation were so important...[they] were able to soften the anger on both sides."

In the past, bereaved mothers have proven to be key to reducing ethnic violence in conflict zones around the world. Researchers interviewing activists in Syria from 2014 to 2015, for instance, found that one of the most effective ways to prevent local residents from joining violent movements was by reaching out to the community's mothers, who proved adept at  "influencing their children and their families to stop the recruitment."

The associate director of Georgetown's Institute for Women, Peace and Security, Mayesha Alam, thinks many of the lessons learned from global war zones could be applied to struggles with police brutality in the US.

"When we think about mothers and gun violence in particular, there's a need to ensure that those who are the most affected by the violence have a seat at the table, that they inform the language and the way solutions are formed," Alam said in a phone interview.

Critics of the Black Lives Matter movement have often referred to it as "divisive," with some refusing to engage with the group's message altogether. Even among Democratic voters, the movement has been polarizing, with only 23% agreeing with the statement "black lives matter," according to a 2015 poll.

Last night, however, the Mothers of the Movement made a powerful plea to Democratic voters on behalf of the movement. "It's the emotional breakthrough a mother can make," Damelin said. "People see [their message is] genuine and not political."

Alam believes that what audiences saw last night in Philadelphia was just a small taste of what women can do when lawmakers amplify their voices and talk with them about ending violence.

"The Mothers of the Movement demonstrated it at the DNC: the power of empathy," Alam said. "The role that mothers can play as bridge builders."