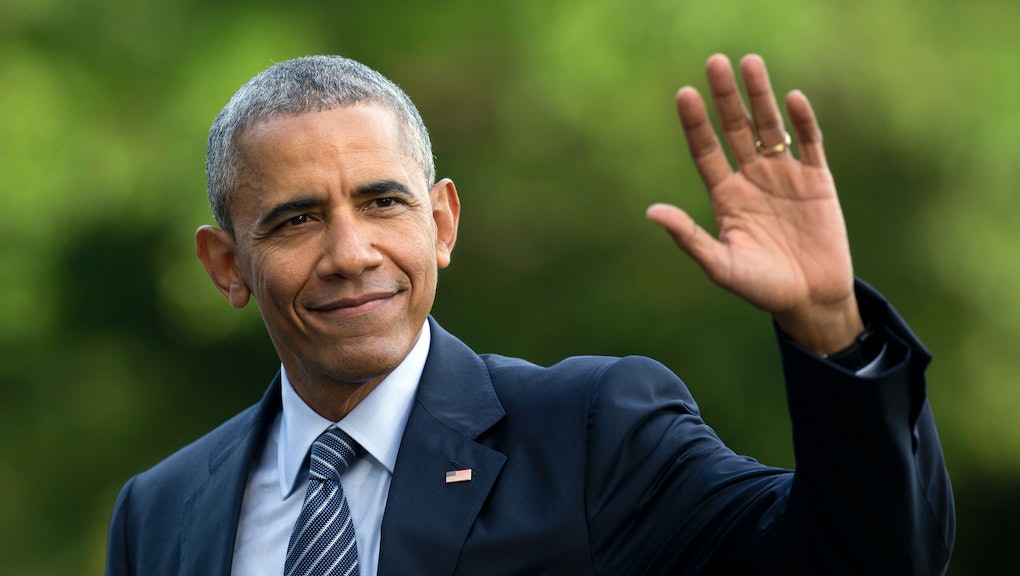 PHILADELPHIA — They're fired up — and they're not ready to see him go.

As President Barack Obama prepared to address the Democratic National Convention on Wednesday night, the party faithful here expressed wistfulness at the impending end of the Obama era, uncertain that they'll ever again see a candidate stir the same sense of idealism and hope that the president aroused in his 2008 and 2012 campaigns.

"If I had to put it on a metric scale, I think Obama being elected was like a 10. Hillary, I'd probably put at a six, 6.5," said Jessica Bright, a Hillary Clinton delegate from Walterboro, South Carolina.

An African-American, Bright remembers the elation she felt at Obama's historic election — but even as a Clinton delegate, she struggles to muster the same enthusiasm at the prospect of the first female president.

"It's great that she's breaking that barrier — but honestly, I'm not as emotionally tied to her as I was with Obama," Bright said. Watching Clinton on the campaign stump, she said, simply doesn't compare to the electric feeling of an Obama rally.

While Obama's soaring oratory and charisma played no small part in his election triumphs, Democrats here also pointed to the pride they felt in his progressive policies like health care reform and the sweeping economic stimulus package he signed into law upon taking office.

"I wish he could run for four more years. But I also know that he brought the country back up to being a powerful country again. We had a lot of things that were happening in the economy [when Obama took office]," said Lisa Lockley, a Democratic volunteer from the Philadelphia suburbs, referring to the economic tumult of the Great Recession.

Lockley, who pulled the lever for Bernie Sanders in Pennsylvania's April primary, now backs Clinton in large part because she sees her as a custodian of Obama's legacy.

"She will keep a lot of Obama's policies intact, if not make them better," Lockley said.

Martha Sanchez, an intern with the Latino Victory Project who became a U.S. citizen in September, said that she'll enthusiastically vote for Clinton over Republican presidential nominee Donald Trump, whose hardline immigration policy has drawn the ire of Latino advocates.

But even a Clinton victory would bring some measure of melancholy.

"I don't know if we'll ever have another Obama, at least for my generation, because he was so inspirational," Sanchez said.

Passing the torch: While Clinton may not spark the same excitement as the candidate who vanquished her in the 2008 Democratic primary, she sees the president as indispensable to her hopes of reassembling the Obama coalition of young voters, minorities and urbanites.

Obama and his former secretary of state made their first joint campaign appearance of 2016 in Charlotte, North Carolina, this month, and White House aides told the New York Times this week that the president will appear on the campaign trail "almost daily" through the November election.

The interest is mutual. While the electorate views Clinton with deep suspicion — only 38% of voters view her favorably, while 56% see her in a negative light — Obama's numbers are in positive territory. According to the RealClearPolitics polling average, 49% of Americans approve of his job performance, while 47% disapprove.

Obama's numbers have dipped slightly in recent weeks amid mounting concerns over the threat of terrorism, but consultant James Day, in town from Washington, D.C., said the president would prove an "amazing asset" on the campaign trail.

"What he'll be able to do is really articulate what his legacy is about, what we've achieved, how far we've come and the work we need to do," Day said.

But with Republicans likely to control at least the House of Representatives after November, a President Hillary Clinton would struggle mightily to build legislatively on Obama's achievements. Though some advocates hope a GOP drubbing in November will prompt the party's lawmakers to agree to comprehensive immigration reform, for instance, those same hopes were dashed after Obama's 2012 victory over Mitt Romney — and the triumph of Trump over pro-reform rivals like Jeb Bush and Marco Rubio will likely make most leading Republicans allergic to any reform bill.

For Democrats yearning for the hope-and-change aura of 2008, the only thing more dispiriting than the prospect of four years of gridlock is the alternative.

"Going into this new era, I'm concerned, because we have a candidate like Donald Trump that's very extremist with views that don't correlate with me," said Bright, the Clinton delegate from South Carolina. "It's sad and it's alarming at the same time."