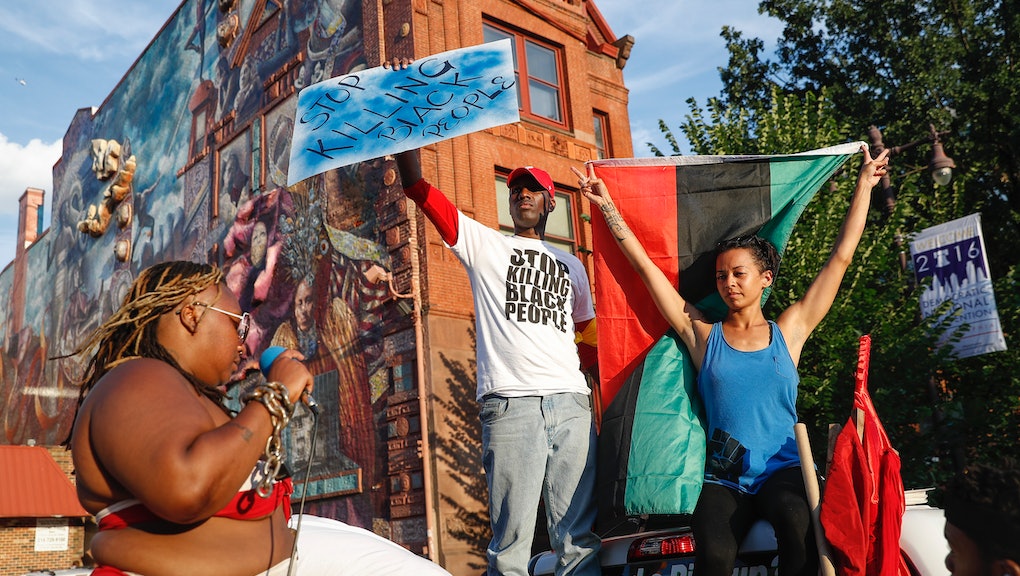 In a Wednesday segment from Fox News, anchor Todd Starnes reported on a protest march outside of the Democratic National Convention, focusing on a black protester who asked white allies to move to the back of the march.

"I need all white people to move to the back," the young woman said into a microphone. "This is a black and brown resistance march."

Starnes said the supposedly incriminating video clip is proof-positive that President Barack Obama's "post-racial" America has failed miserably. "Remember all that talk about President Obama ushering in a post-racial society?" Starnes asked. "Well it turned out to be a load of grade-A fertilizer, folks."

Starnes added the woman's request (which Fox termed an "order" in a tweet) suggests we "live in a nation where one's place in a protest march is determined by the color of one's skin and not the content of your character," in what may be the most bungled reference to Martin Luther King Jr.'s "I Have a Dream" speech to date.

He ended the segment reiterating, "'White people to the back; black people to the front,' — I wonder what Rosa Parks would have done."

What the protester was requesting wasn't "segregation," as Starnes called it in the news clip, but rather for white people to acknowledge the purpose of the protest was for black and brown lives.

"If you are for this march and you are here to support, you will appropriately take your place in the back of this march," she later said.

Mic writer Jamilah King pointed out earlier in July that while it's important for white people to confront their privileges, it often comes at the expense of the very groups they're trying to support. And when white voices — like Macklemore, Angelina Jolie and Leonardo DiCaprio, for example — become louder than those of people of color, it's a problem.

"All of it boils down to one brutal truth that every white ally needs to hear," King wrote. "Discussions about racism are not all about you."