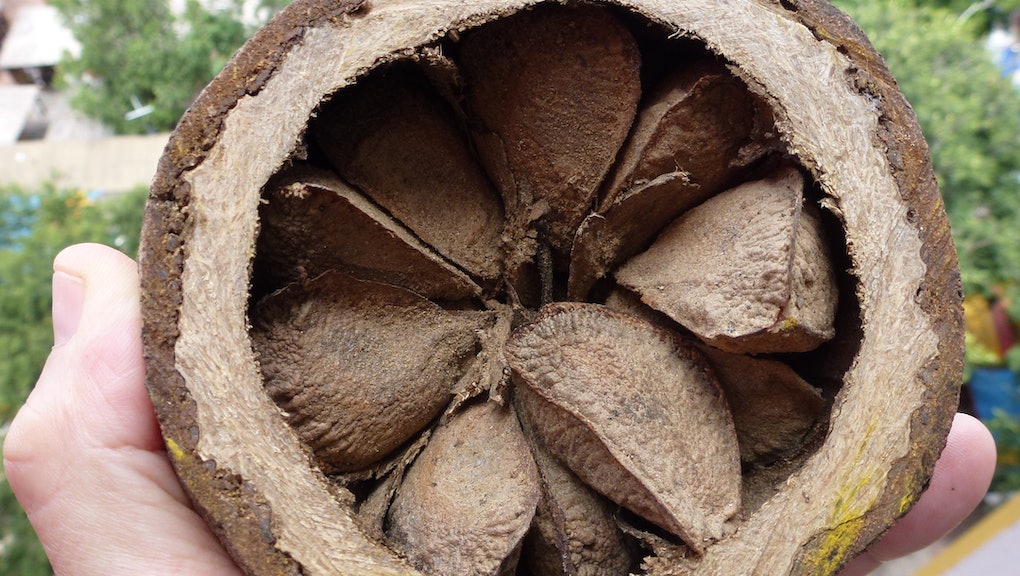 Harvesting the Seeds of Sustainability in the Brazilian Amazon

Chances are, some of the oxygen molecules you just inhaled came from the Amazon rainforest. Actually, you can find traces of the Amazon everywhere in North America, Europe and elsewhere, from cloud cover and morning dew to rainfall and air temperature.

Amazing as that may be to contemplate, it shouldn't be news to anyone. We've known for decades how critical the rainforest is to sustaining life on Earth. And yet, although the rate of deforestation in the Amazon has generally declined since it last peaked in 2004, it jumped up by 16% in 2015 and claimed some 5,831 square kilometers (roughly half the area of Los Angeles). The short-term financial rewards promised by deforestation, it seems, continue to challenge abstract notions of biodiversity and long-term sustainability.

But an initiative based in the Brazilian state of Amazonas is hoping to change that calculus by fusing economic development with environmental preservation.

"The idea is to make the forest worth more standing than cut," said Virgilio Viana, Superintendent General of Amazonas Sustainable Foundation (Fundação Amazonas Sustentável, or FAS, in Portuguese), a non-governmental organization that works with the riverine communities in Amazonas. "One of those ways is to increase the value of products that can be harvested sustainably."

An innovative partnership among FAS, the State of Amazonas government and Marriott International Inc. is hoping to find the seeds of sustainability in an experimental program that encourages indigenous communities in the Juma Reserve, deep within the northwestern Amazon forest, to harvest and sell Brazil nuts to luxury hotels located more than two thousand miles away in São Paulo and Rio de Janeiro. The program aims to provide economic incentives for the farmers to become allies on the ground who can help fend off illegal loggers, miners and cattle ranchers in protected but remote areas where monitoring and enforcement are difficult or infrequent.

Stewards of Sustainability. At first blush, the concept of farming the rainforest might seem contrary to preserving it. While it is possible to overexploit forest resources, programs that specifically tap into the support of local communities have yielded more sustainable farming practices, according to several recent studies in the Peruvian Amazon, the Himalayas in India, and the savannahs in West Africa. In some cases, such as the enormous pirarucu fish native to the Amazon River, wildlife populations are even enhanced.

In exchange for securing land tenure or harvesting rights, local farmers also help to monitor against illegal clearing and mining by unscrupulous grileiros who illegally take possession of land in the Brazilian Amazon.

As it turns out, Brazil nuts are the ideal product to be sustainably harvested.

"Brazil nuts can only grow in healthy, virgin forest," said Mark Moroge, a program director at the Rainforest Alliance who oversees a similar effort to harvest and sell Brazil nuts in Peru. "If you do not have a vibrant tropical forest ecosystem, you will not have Brazil nuts."

Brazil nuts come from the Bertholletia excelsa, a majestic tree in the Amazon that lives for hundreds of years and stands more than 160 feet high, roughly the height of a 16-story building. The nuts themselves grow in clusters inside large fruits the size of coconuts that weigh up to five pounds. Gatherers walk the forest floor with large baskets strapped to their backs, keeping an eye out for the nut-bearing fruits — both those already on ground and those falling from above, which can reach up to 50 miles per hour on the way down. Though Brazil nut plantations do exist, the majority of the giant nuts come from rainforests, which are home to the oldest, largest and, therefore, most productive trees.

"You cannot build a livelihood on Brazil nuts without being a good steward of the forest," Moroge said. "It's one of the clearest examples of sustainable development."

A 2014 study published in The Journal of Nutrition found that inadequate levels of selenium were associated with depression among young adults. Another article published in the medical journal Lancet in 2000 concluded that selenium plays a critical role as an antioxidant that helps fend off infections and cancer. And a 1998 article in the Oxford University journal Human Reproduction reported a statistically significant correlation between selenium and high sperm count in a study of 257 Norwegian men.

"We like to call it happy protein," FAS's Viana said. One ounce of Brazil nuts, about six to eight nuts, packs 4 grams of protein and 544 micrograms of selenium, more than seven times the recommended daily allowance.

These three factors — the popularity of protein-rich diets, preference for sustainably harvested foods and the benefits of selenium — added up to an 8.8% annual growth in the worldwide sales of Brazil nuts by volume between 2007 and 2014, according to market research firm IndexBox.

Forest to Table. Getting the nuts from the Amazon forest to the table is vastly easier said than done. Communities have to be organized to gather nuts at scale for commercial sale. The nuts have to be extracted from their pods and dried. Then there's transportation to consider. Many communities that gather the nuts live in remote areas that require hours of travel by boat just to reach the nearest urban areas, adding cost to the distribution. Buyers need to be found, and that requires packaging and marketing. In other words, FAS needed a corporate partner.

The organization found that partner in Marriott, which has 4,500 properties in 87 countries and territories, including 10 hotels in Brazil. Marriott's executives dived in with gusto, connecting FAS with Federal Express to help with transportation, featuring the nuts as ingredients for dishes served in its hotel in São Paulo, and brainstorming packaging and marketing possibilities for sale to guests.

Those efforts are starting to pay off. From 2008, when the partnership began, to 2013, the price of Brazil nuts sold by local harvesters in the program quadrupled, thanks to improved quality, packaging and distribution, according to an internal report by Marriott. The hotel chain has been one of the primary buyers of the nuts, selling them in hotel gift shops in Brazil and featuring them in dishes prepared at its restaurants.

"Guests really listen once you talk about the Amazon," said Gil Zanchi, General Manager of the Renaissance Hotel in São Paulo. "We have 'Navigators' in our hotels who try to educate and inform guests about the local community. They're able to tell guests about what's so special about the Brazilian nut, where it comes from, its connection to the Amazon. It gives our guests a story to take back home, where they can tell other people, and help spread the word."

The Bigger Picture. The Brazil nut program is part of much larger effort by FAS and Marriott, which has contributed more than $2 million since 2008 to help preserve the rainforest — specifically the Juma Reserve, a 2,270-square-mile swath of the northwestern Amazon.

Home to more than 2,000 people in 38 communities, Juma was designated as a protected reserve by the Brazilian state of Amazonas in 2006. Since then, Juma has been a hotbed of public-private programs designed to find ways to make the forest, as Viana put it, worth more standing than cut.

One of those experiments is a program called Reducing Emissions from Deforestation and Degradation, or REDD, where areas rich in stored carbon, such as the Amazon forest, can sell carbon credits to countries that emit carbon into the atmosphere. The money generated from selling these credits are fed back into the local economy, funding educational, social and economic development programs within the reserve.

In Juma, Marriott has been the primary corporate sponsor of the REDD+ project, which is run locally by FAS. The funds provided by Marriott were used to help construct a school for primary and secondary education, buy equipment for fishing and Brazil nut processing, and build a community health center, among other things.

To be sure, combatting deforestation in the Amazon requires unceasing effort and generational commitment, and programs like Juma's REDD+, which is the first of its kind in Brazil, are still in early days. A study published in the journal Forest Ecology and Management projected that the Juma reserve will be "effective in reducing carbon emission by 2050, but the reduction would be substantially less than that" initially calculated at the start of the project. Designating portions of the Amazon as reserves can resemble a game of Whack-a-Mole, as deforestation pops up outside the protected areas.

And while REDD+ projects focus on indigenous populations who live in or near the forest and are less likely to be involved in deforestation, business entities from outside of the Amazon continue to hire illegal squatters to clear forests for mining or cattle.

"Juma's larger value is how it is an example for other projects," said Philip Fearnside, professor at the National Institute for Research in the Amazon Manaus, Brazil. "It's important as a model for other REDD+ projects. Since this is the first one, it's important to get it right."

What's clear, however, is the impact the programs have had on deforestation rates within the reserve, 96% of which has remained covered by forests, the same as when the program started. The programs have also improved the welfare of those indigenous communities, many of whom pledged to report deforestation activities. In a recent survey of 160 families within the Juma reserve conducted by FAS, 89% said their livelihoods have improved since committing to zero deforestation and relying instead on products that can be harvested sustainably — including Brazil nuts.

"It's not just about selling nuts," Viana said. "What matters is that the nuts come from a forest that is protected and through deals that are economically fair for those who live in the forest."