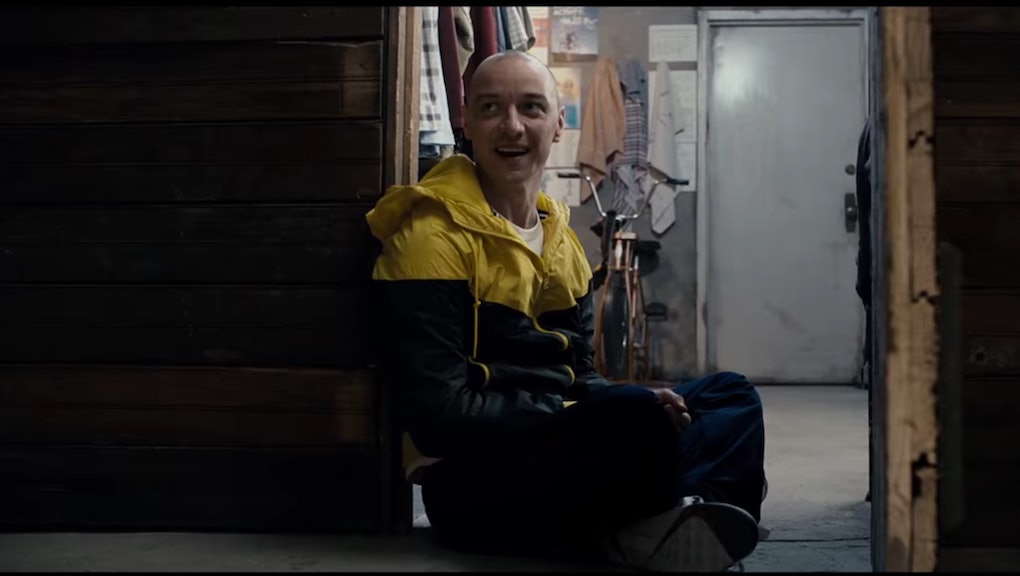 The trailer for the new M. Night Shyamalan movie Split debuted online Wednesday afternoon and while all the details of the plot are not clear yet, the trailer suggests the film uses a person with multiple personalities — known as dissociative identity disorder among mental health professionals — as its central villain.

Call it a sixth sense, but all signs point to Split being filled with stigmas about people with mental illnesses.

In the trailer, James McAvoy plays a man named Kevin with "split" personalities, who kidnaps three unsuspecting lily-white girls and keeps them in his basement. When the girls think they see a woman enter the basement, they shout for help. Rather, it's McAvoy's character who is dressed and acting fully like a woman.

As Kevin goes about his daily activities in the trailer, a psychologist explains that she's "never seen a case like this before. Twenty-three identities live in Kevin's body."

If the movie rests on mental illness as the driving force behind Kevin's murderous ways, then Shyamalan's plot rests on a tired, decades-old plot behind horror movies: blaming mental illness.

The earliest slasher film, Psycho, taught us that, at any moment, we might be confronted by a person with mental illness waiting to kill us in the shower.

Halloween played on similar fears with babysitters and Fatal Attraction reminded viewers that any casual sex encounter could mean you'd bring home a mentally unstable killer who boils bunnies and tries to kill your wife.

These movies are, for the most part, in line with public perception of mental illness. According to a 2006 national survey, 60% of Americans believed people diagnosed with schizophrenia were more likely to commit a violent crime. Thirty-two percent believed the same of people living with major depression.

Whether Kevin's mental illness has a supernatural quality to it is unclear, but hinted at, in the trailer. Given Shyamalan's ouevre — Signs, Unbreakable and Lady in the Water all had supernatural or fantastical elements — that's not out of the question. While that may seem to let him off the hook, given the many myths circulating about people with mental illness, is there any reason to add to it?

Adding a supernatural element to mental illness has produced one of the scariest killers of all time. In Halloween, Michael Myers is a child living with mental illness who is sent to live in an asylum. Somewhere along the way, he becomes unstoppable, unkillable and able to walk faster than most people can drive. With this as the leading portrayal of mental illness in horror films, perhaps it's time to move people with mental illness farther away from the role of threat and closer to the reality.

Sure, films can just be escapist popcorn fare, but they also operate in an important dialogue with reality. Films can reflect and inform the real world.

In a world where Silver Linings Playbook showed that people with mental illness deserve love and United States of Tara portrayed the everyday struggles of people living with dissociative identity disorder, we don't need Split setting the bar for mental illness in films back to 1960.