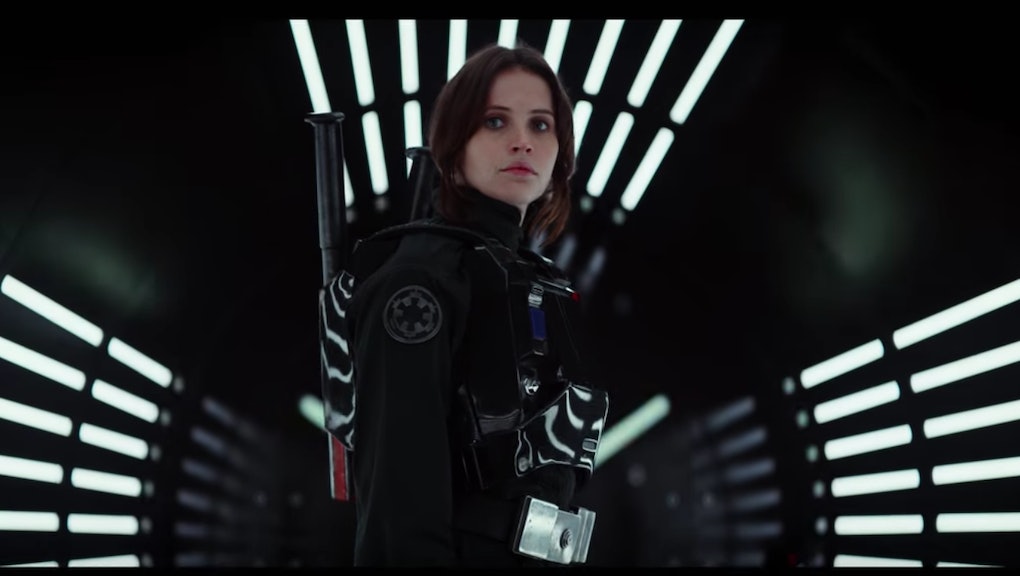 Everything We Know About ‘Rogue One: A Star Wars Story’

The Force is very strong with Disney, which has wasted no time in justifying its $4 billion acquisition of Lucasfilm by churning out impressive properties. The seventh film in the Star Wars saga, The Force Awakens, was a resounding financial and critical success. It left fans eagerly awaiting the follow-up episode in 2017 and answers to their most thought-provoking fan theories (we all need to know who Rey's parents are so we can stop bickering).

In the meantime, however, Disney will be venturing into unknown Star Wars territory for its upcoming projects: three planned anthology films, which will fall outside the timeline of the episodic narrative. Rogue One: A Story Wars Story is the first of these films, which will come out later this year.

Unlike the buildup to The Force Awakens, details have been more generously shared ahead of Rogue One's release. Here's what we know about the film so far.

We'll finally know how the Rebels got the plans to the Death Star, with a ton of new faces. The film's premise is taken from a single sentence in A New Hope's opening crawl, which briefly describes that a band of Rebels were able to steal the plans of the Death Star that eventually get into the hands of Princess Leia. Basically, the events of Rogue One set the stage for the original Star Wars narrative.

Leading the Rebels will be Jyn Erso (Felicity Jones), who joins the Rebellion because they value her fighting skills and interplanetary street smarts. However, she undoubtedly has the right attitude for it. "This is a rebellion, isn't it?" Erso asks in the trailer. "I rebel."

Erso will be joined by an eclectic group of heroes, including a blind warrior Chirrut Imwe (Ip Man's Donnie Yen) and an ill-tempered robot (Alan Tudyk) that is the "antithesis of C-3PO," per Rogue One director Gareth Edwards.

Details for other characters who will be featured in Rogue One are scarce ahead of the release — but we know a few bits. For example, Mads Mikkelsen will be playing Erso's father (a fact he accidentally spoiled during a TV interview). His work as a scientist is sought by the Empire and Rebels alike. Forest Whitaker, meanwhile, plays a character from the Clone Wars animated series, Saw Gerrera, who fought alongside Anakin Skywalker.

Then, there's the main villain. Ben Mendelsohn plays Director Orson Krennic, a military leader specializing in advanced weapons research in the Galactic Empire, so he'll likely have some part to play in the Death Star's construction. But Krennic will also be dealing with a very familiar — and very iconic — face.

Darth Vader is in Rogue One. The scope of his role is still unclear, but one of the most iconic villains of all-time is officially returning in Rogue One. Better yet, James Earl Jones as Vader's unforgettable voice is coming back as well.

It's not just exciting fan service, however. Darth Vader's return makes narrative sense; he's an imposing force with the Empire at the height of Rogue One who answers only to Emperor Palpatine, so even high ranking officials in the Empire have justifiable reason to fear him.

"Vader doesn't really play by the rules," Kiri Hart, Lucasfilm's chief of story development, told Entertainment Weekly. "He's present in the military structure, but he's not beholden to it. He's not accountable to anybody, really, except Palpatine."

While his on-screen time is likely going to be shorter than Krennic's — again, Krennic's the main villain — Vader's expected to be a looming presence for Krennic throughout. As a result, Krennic will have to avoid Vader's wrath while also trying to curry favor with the Emperor, and it probably won't end well for him.

The drama over Rogue One reshoots were likely exaggerated. A great disturbance in the Force prior to Rogue One's release came in May when rumors surfaced that the film had to undergo extensive and expensive reshoots over the summer. The original report of the reshoots came from the New York Post, which noted that the film's early test screenings weren't going well and didn't fit the "tone" of other Star Wars films.

Here's the truth, according to Disney and Lucasfilm executives speaking with Entertainment Weekly: Yes, there were reshoots, which is commonplace for large blockbusters. It's not a sign that the film had a disastrous production; in fact, if the reshoots were as extensive as the New York Post suggested, they couldn't get it done in such a short amount of time.

However, Rogue One is unlike other Star Wars films, and has a different tone. But Edwards insisted Disney supported said tone — after all, it's being sold as a war film.

"I'd definitely describe it as: It's got a dark tone," Edwards told EW. "The studio has been very supportive of that. I mean, the sort of tone we were going for when we started was the tone you have in films like The Empire Strikes Back. And that's not in any way been compromised."

Rogue One is made by people who truly love Star Wars — which is essential. While the first Rogue One trailer brought understandable excitement, the teasers revealed at this year's Star Wars Celebration showed that the film is also in very capable hands: those of passionate filmmakers who grew up loving the franchise (i.e. J.J. Abrams with The Force Awakens).

Like Abrams, Edwards has maintained that he's toed the line between giving the previous films the proper adoration, while also forming a new, original identity for Rogue One.

"The pressure's so high," Edwards says in Rogue One's celebration reel. "We're making a film that's touching my favorite movie of all-time, but then if you're too respectful of it — that you dare not do anything different, or take a risk — then what are you bringing to the table?"

The reel shows what makes Star Wars such a cultural phenomenon: characters with diverse stories, human and alien alike. By the looks of it, we're getting plenty of them in Rogue One.