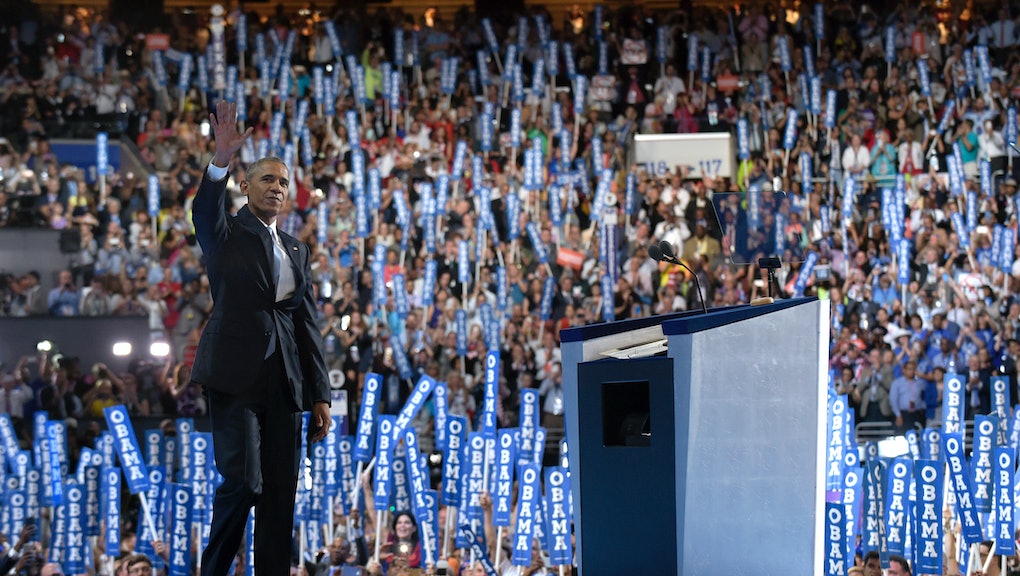 Barack Obama Says He Hasn't Lost Faith in America's Promise — But Have Voters?

PHILADELPHIA — Twelve years to the day after he delivered the stirring convention keynote address that launched his career in national politics, captivating Democrats with his soaring paean to the American dream, President Barack Obama on Wednesday night delivered a forceful message to supporters wistful at the impending end of that career: Don't stop believing.

Appearing onstage after a stirring video tribute that left many delegates here at the Democratic National Convention in tears, Obama told the party faithful that while he was battle-hardened from fierce fights over health care reform, immigration, foreign policy and the role of government, he retained the same idealism that infused his 2004 convention speech and his barrier-breaking 2008 campaign.

"It can be frustrating, this business of democracy. Trust me, I know," Obama said. "Hillary knows, too. When the other side refuses to compromise, progress can stall. Supporters can grow impatient, and worry that you're not trying hard enough; that you've maybe sold out."

Though the partisan climate has only grown more acrimonious under his administration — a reality underscored by the Republican Party's nomination of a man who once questioned Obama's American citizenship — the president focused not on the failure of his lofty ambitions to move beyond a polarized political system, but on the profound social and political transformation he helped shepherd.

"I promise you, when we keep at it; when we change enough minds; when we deliver enough votes, then progress does happen Just ask the 20 million more people who have health care today," Obama said. "Just ask the Marine who proudly serves his country without hiding the husband he loves. Democracy works, but we gotta want it – not just during an election year, but all the days in between."

Championing the candidacy of an erstwhile rival whom he once charged would "pit blue America against red America," Obama embraced Democratic nominee Hillary Clinton as a president who would safeguard and build upon his policy legacy, saying that there was "more work to do" on issues like paid leave, poverty, criminal justice reform and national security.

Democrats here cast the unfinished business of the Obama administration as the fault of Republicans, who have controlled the House of Representatives since the 2010 midterm elections and the Senate since the 2014 midterms.

"He did an incredible job with the Congress as far as Republicans taking over and just being the party of no the whole time," said Bill Marconi, a Philadelphia resident sporting an Obama 2012 T-shirt.

But while congressional Republicans have indeed sought to thwart Obama's policy agenda since he took office, the president said Wednesday night that ideological disagreements between the parties represent the "contest of ideas that pushes our country forward."

Donald Trump, he said, signified something much more sinister.

"What we heard in Cleveland last week wasn't particularly Republican, and it sure wasn't conservative," Obama said, referring to the Republican National Convention. "What we heard was a deeply pessimistic vision of a country where we turn against each other, and turn away from the rest of the world."

Saying that Trump's "fanning of resentment, and blame, and anger, and hate" is "not the America I know," Obama hailed Clinton as a candidate who would preserve America's "bonds of affection" and its "common creed."

Projecting confidence that Clinton would succeed him in the Oval Office, Obama proclaimed, "I stand before you again tonight, after almost two terms as your President, to tell you I am even more optimistic about the future of America."

But that optimism seems discordant with polls showing Trump with a not-insignificant chance of prevailing over Clinton in November. The RealClearPolitics polling average finds the real estate tycoon narrowly ahead of Clinton nationally, 46% to 45%, and statistics guru currently gives Trump a 47% chance of victory, meaning the election is a practical coin-toss.

Even if Clinton defeats Trump, his improbable ascent to the GOP nomination nevertheless points to a visceral anger convulsing much of the country, with profound anxieties over race, immigration, economic security and national security upending the country's political institutions.

The surprisingly strong performance of the anti-establishment insurgent Bernie Sanders in the Democratic primaries shows that such anxieties are hardly the exclusive province of the Republican Party. Nearly seven in 10 voters say the country is on the wrong track.

That unease and insecurity won't dissipate once the election returns are in.

Challenging Trump's depiction of a country on the road to ruin, Obama said, "America is already great. America is already strong. And I promise you, our strength, our greatness, does not depend on Donald Trump."

But Obama's legacy does.

Come November, the steadfast optimism he conveyed Wednesday night will be remembered either as quintessential Obama — the preternaturally placid president pointedly refusing to panic even as many in his party express alarm — or as a woeful misreading of the American mood.