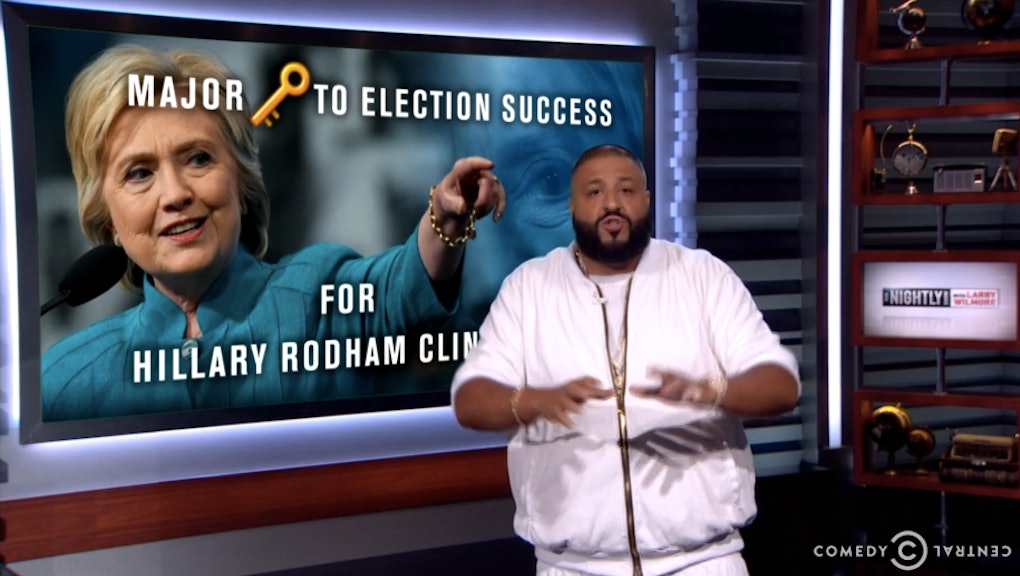 Let's get the obvious out of the way: The 2016 election season has spiraled out of control.

On Wednesday, Republican presidential nominee Donald Trump implored Russia to hack the U.S government. Perhaps unsurprisingly, that wasn't even the worst thing Trump has said or done since he launched his campaign.

Well, Larry Wilmore, host of The Nightly Show, thinks there's only one person who can stop the U.S. from ushering in the apocalypse: Hillary Clinton.

"We desperately need you to keep us from imploding into the abyss, girl," Wilmore told his audience Tuesday. "If you don't turn this thing around, Donald Trump could very well be president!"

To give Clinton the confidence and tools she needs to defeat the final boss, Wilmore brought in a secret weapon: DJ Khaled.

Khaled, a producer, rapper, motivational speaker and Snapchat wizard, is known for offering up "major keys," kernels of knowledge that will help you live your best life.

Facing the possibility of a Trump dictatorship presidency, Khaled has some specific advice for Clinton:

Trump is known for his petty insults and attacks on his rivals. Khaled wants Clinton to get her "debate game tight" i.e. ready to clapback.

Khaled wants Clinton to embrace the power that will come with the presidency. "You're the No.1. You are that special cloth."

Getting endorsed by The Don, better known as President Barack Obama, is a major key in Khaled's book. Also, Khaled thinks Clinton should take the edge off with some liquor.

4. Get the King of Snapchat's endorsement

Khaled is giving Clinton his official seal of approval. So don't let him down, and buy his album.

Bless up, Hillz. The world is in your hands.