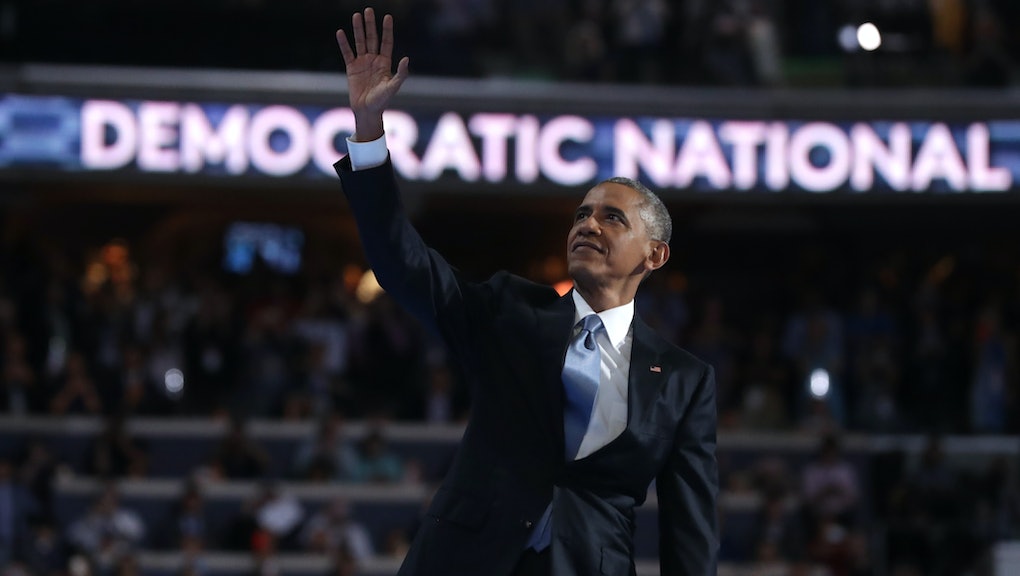 Barack Obama's 2016 DNC Speech Was One for the History Books

PHILADELPHIA — President Barack Obama delivered a forceful defense of his legacy, landed devastating blows on Republican presidential nominee Donald Trump and made a strong case for his hopeful successor Hillary Clinton in a rousing speech Wednesday night at the Democratic National Convention.

Obama struck an optimistic tone, saying after two terms in the Oval Office he is "more optimistic about the future of America than ever before."

He laid out his achievements in office — from stopping the economic slide he inherited in 2008 to achieving marriage equality for LGBTQ Americans — and said only Clinton could continue with that legacy.

"You know, nothing truly prepares you for the demands of the Oval Office," Obama said. "You can read about it, you can study it. But until you've sat at that desk, you dont know what it's like to manage a global crisis or send young people into war.

"But Hillary has been in the room. She's been part of those decisions. She knows what's at stake."

Obama spoke directly to disgruntled Bernie Sanders supporters — a handful of whom held signs protesting the Trans-Pacific Partnership throughout his entire speech — saying Trump would not allow any of their goals to pass if he were to occupy the White House.

"Hillary Clinton is that woman in the arena," he said. "She's been there for us, even if we haven't always noticed. And if we are serious about our democracy, you can't afford to stay home just because she doesnt align with you on every issue."

He went on to attack Trump's signature issues, calling him a "homegrown demagogue" who's painted an untrue picture that America is a dystopian wasteland only Trump can return to greatness.

"Ronald Reagan called America a 'shining city on a hill.' Donald Trump calls it 'a divided crime scene' that only he can fix," Obama said. "He's not actually offering any real solution to those issues. He's just offering slogans, and ... betting that if he scares enough people, he might score just enough votes to win this election.

"That is another bet that Donald Trump will lose."

At the end of his speech, he thanked Americans for being by his side during his presidency, and implored them to support Clinton in November.

"Reject cynicism and reject fear," Obama said. "Summon what is best in us to elect Hillary Clinton."