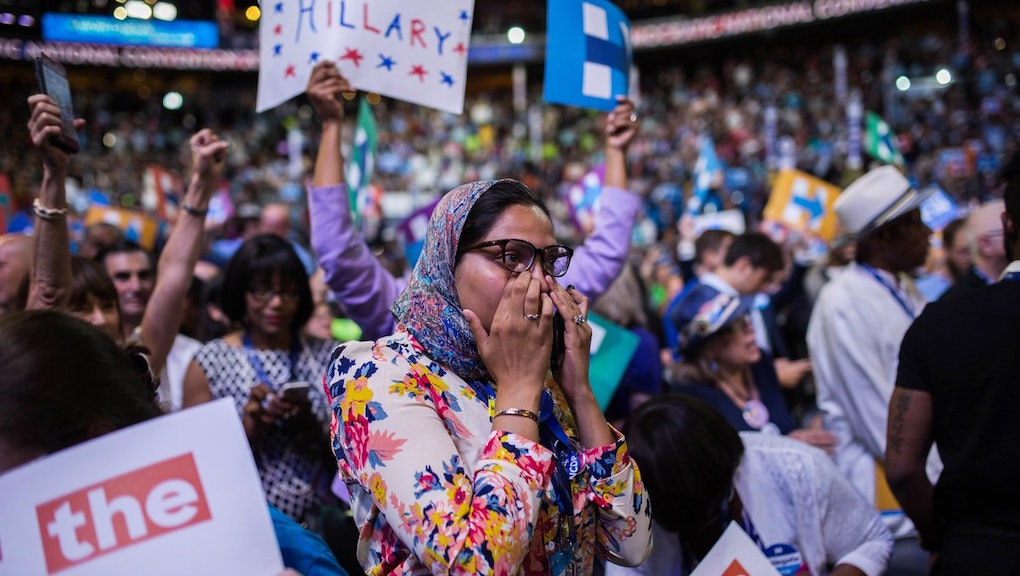 Here's the catch: Nida Allam, the woman in the photo, was wiping her tears away the moment Bernie Sanders conceded his candidacy for president, not for Clinton's nomination.

Allam, a North Carolina delegate and regional field director for the Sanders campaign, called out Clinton's campaign for misconstruing the photo for their own benefit.

"I was upset that my emotions were being used by her when she did not truthfully earn my vote," Allam said in a phone interview. "She is getting it solely by default."

The 22-year-old also felt that her visible Muslim identity was exploited to portray a false narrative for the Clinton campaign.

"[The Clinton campaign] tweeted a picture of me weeping the moment that Bernie Sanders conceded," Allam told reporters at the DNC, with actresses Shailene Woodley and Rosario Dawson at her side. "It was the pain of all the stories I heard along this year — over a year — campaign of all the people that put all their hope into Senator Sanders."

Allam said she primarily had an issue with Clinton's stance on the Palestinian-Israeli conflict.

"I believe Clinton needs to realize she can't take the Muslim vote for granted," Allam told Mic. "Most of us are children of immigrants or immigrants ourselves. There is a large Palestinian population in America, so her stances on the Palestine-Israel conflict affect the lives of American Palestinians. They have family members who are being murdered and displaced every day because of the support the U.S. has given Israel in their illegal settlements."

The Clinton campaign tweeted a general apology for the "mixup," but has yet to take down the original tweet. Allam said that they never asked for permission to use the photo as part of their campaign material, and she still has not received a personal apology from the campaign.

This isn't the first time the Clinton campaign has been under fire for issues regarding Muslim American identity.

On Tuesday, former U.S. President Bill Clinton made an off-the-cuff remark about Muslims who love America and hate terror. He faced backlash for drumming up their identities into two troubling and inaccurate paradigms.

"If you're a Muslim and you love America and freedom and you hate terror, stay here and help us win," Clinton said when going off-script during his speech at the DNC.

In an April 26 campaign rally in Philadelphia, Hillary Clinton also made the remark of needing "terror-hating Muslims ... in the fight against radicalization."

That the Clinton campaign used Allam's photo for alleged Muslim outreach is sadly just another example of how politicians and election campaigns exploit Muslim identity.

"For her to take that picture of me, and use it as support for her and trying to use that to get the Muslim vote — in my opinion — is not right because that's a vote she needs to earn by speaking on the issues Muslim Americans care about," Allam said.