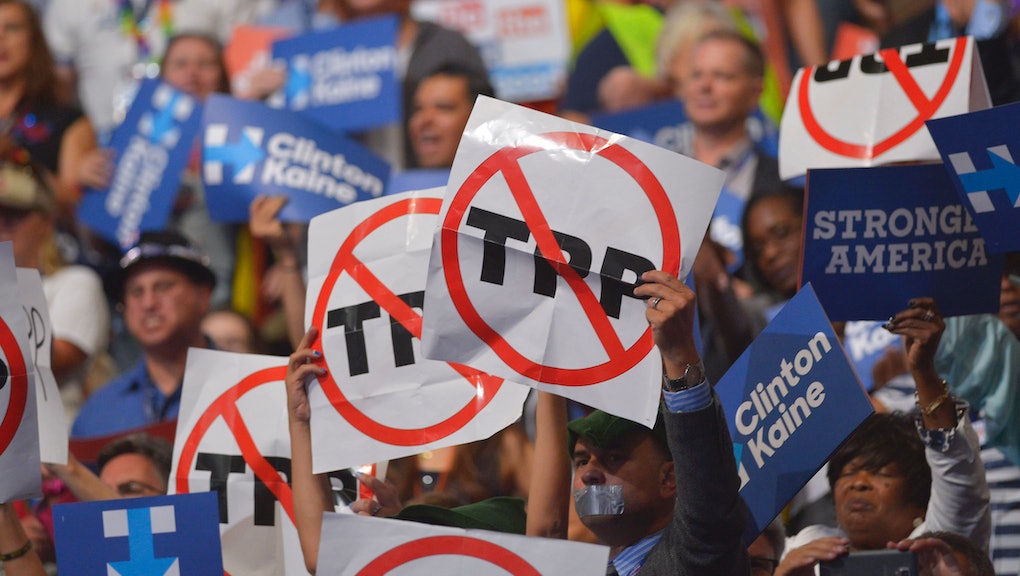 What Is the TPP? 3 Facts You Should Know About the Trans-Pacific Partnership

Wondering what exactly those people holding anti-TPP signs are all fired up about at the 2016 Democratic National Convention?

TPP is short-hand for the Trans Pacific Partnership, a 5,000-plus page proposed trade agreement that was signed by President Barack Obama this February and is now pending Congressional approval.

The deal would liberalize trade relations by lowering import and export taxes and establishing common rules between 12 countries: Australia, Canada, Japan, Malaysia, Mexico, Peru, the United States, Vietnam, Chile, Brunei, Singapore, and New Zealand. If it is ratified, it would be the largest regional trade agreement in history.

Democratic presidential nominee Hillary Clinton initially supported the deal, calling it during a 2012 trip to Australia the "gold standard" of trade deals. Last October, she rolled back her support, saying after reviewing the deal again: "It didn't meet my standards."

Republican presidential nominee Donald Trump has been blunter, saying of TPP, "It's a rape of our country."

But why is TPP so controversial? And who's right?

When it comes to free trade, there aren't many easy answers but there are a few key facts all voters should know.

The U.S. has a history of increasingly free trade

Proponents of free trade argue that it stimulates global economic growth by making it easier for companies and consumers to exchange goods across borders, primarily by reducing taxes called tariffs.

But not everyone agrees that free trade is beneficial.

In fact, disagreements over tariffs have been at the center of American politics since before the Civil War when businesses in the northern U.S., most concerned about competition from imports, favored tariffs, and those in the south, which exported a lot of cotton, did not.

While restrictive tariffs were increasing common during the first few decades of the 20th century, the tide shifted under President Franklin Roosevelt. With the Reciprocal Trade Agreements Act of 1934, the U.S. agreed to reduce its tariffs on imports — provided other countries also reduced theirs.

If ratified, the TPP would eliminate 18,000 export taxes on American products, but it would also further decrease tariffs on imports from foreign countries.

There is a body of research supporting the notion that free trade displaces jobs, and manufacturing positions in particular, which are relatively well-paid considering they don't require a degree.

Then again, some economists argue that those job losses would have occurred with or without trade agreements.

A different objection to free trade agreements is that they tend to be too complicated. The TPP, with 30 chapters and thousands of pages, makes it easy for multinational corporations to find loopholes to exploit for gain, critics argue.

And while countries may be understandably protective of their leading industries — and the ability of home-domiciled companies to generate high revenues — protectionism hurts consumers, said Sharyn O'Halloran, a professor of political economics and international affairs at Columbia University.

"They all want to make sure they can get the highest prices, but at the same time there's a cost, and that cost, of course, goes to consumers," she said.

Conversely, freer trade makes products cheaper. One commonly cited study from the economists at University of California, Los Angeles, and Columbia University found that closing off trade would decrease purchasing power for the lowest-income Americans by up to 63%.

Proponents of free trade also argue that it makes America more competitive by making it cheaper for manufacturers to make higher-quality goods that they can sell overseas, particularly in Asia. They say TPP will help counter the growing influence of China, which is not included in the deal.

Workers outside the U.S. could stand to gain from the agreement as well, as it imposes more regulations aimed at improving labor conditions and protecting the environment.

While the U.S. may lose jobs in the short-term, those jobs will be replaced by higher-paying ones, free trade advocates say.

It's hard to say what will happen to the deal, but it has not been ratified and both major presidential candidates have now disavowed it.

Though Virginia Governor Terry McAuliffe previously said Clinton might flop if the deal were rolled back, Clinton's campaign has since disavowed these comments. Trump has said he would crack down on free trade considerably, making new tariffs on Mexican and Chinese goods a central part of his platform.

TPP cannot happen without the U.S. and Japan, and there is a February 2018 deadline for nations to sign on.