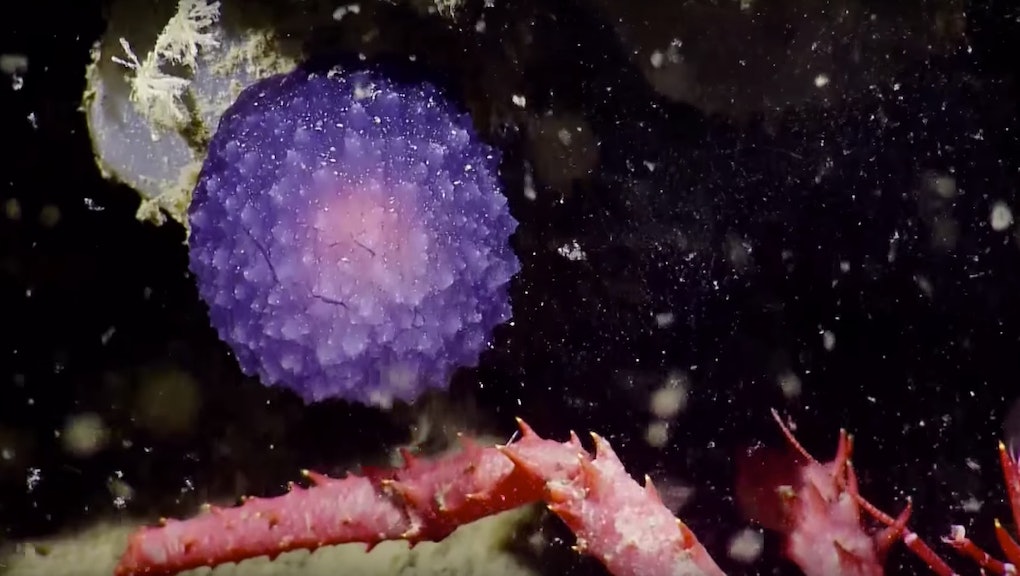 Marine scientists with the research vessel E/V Nautilus discovered a glowing purple orb off the California coast, and they filmed the whole thing with an underwater robot.

Watch as they battle with a curious, scuttling crab to vacuum up the orb before it's lost to the mysteries of the Pacific Ocean, and listen with glee as they try to figure out what the orb could be.

"Maybe it's an egg sac," one says. "It's got a little embryo-type thing inside."

"Maybe it's a spider egg sac."

"We don't want to mess with spider egg sacs."

Finally, they use a suction tool to "slurp" it up.

They still don't know, but according to the EVNautilus YouTube channel, "we're thinking the purple orb is a pleurobranch, a nudibranch relative." That means it's a little mollusk, a soft-bellied sea slug.

"This unidentified purple orb stumped our scientists onboard," they wrote. "After sampling, it began to unfold to reveal two distinct lobes. It could possibly take years for scientists to definitively determine whether it's a newly discovered species!"

"In total, humans have explored less than 5% of the ocean floor," Vox points out — but oceans make up 70% of the planet. The Nautilus Expedition is breaking new ground, giving the public unprecedented access to its missions and using the latest technology to explore.

While the Southern California Margin has been explored for 50 years, notes NautilusLive.org, "high-resolution multibeam bathymetric coverage of the seafloor here remains less than 50% complete, leaving much to be discovered."

We need ocean research more than ever

In June, Mic's Kelly Dickerson laid out why:

Oceans are intricately tied to climate change: They act as a carbon sink, and they've absorbed about one-third of man-made carbon emissions since the Industrial Revolution, according to an essay by sociologist Amitai Etzioni. That stops the emissions from entering the atmosphere and warming the planet.

It's a magical world down there, so let's go exploring — there are many more glowing orbs left to discover.