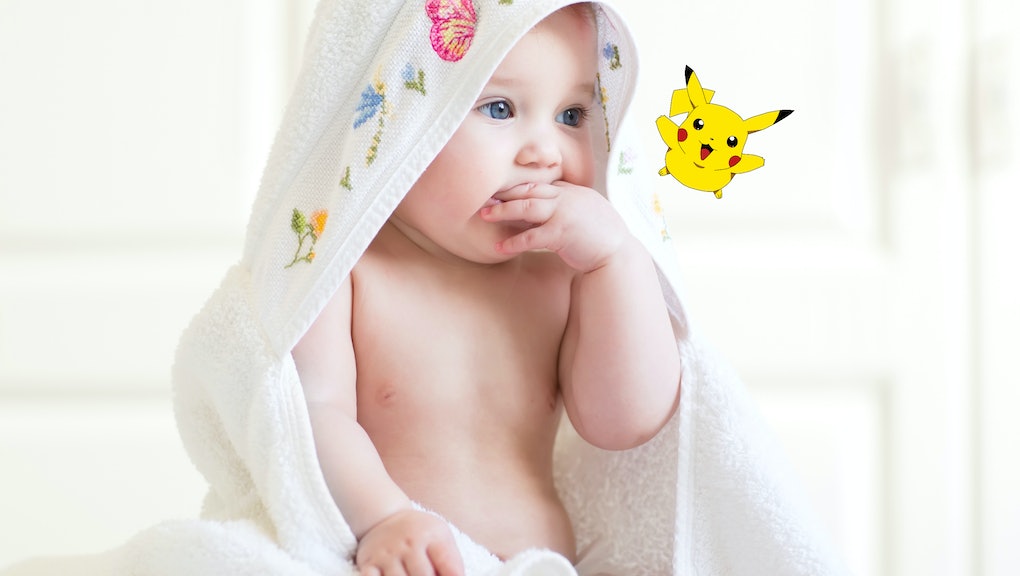 'Pokémon Go' Characters Are Inspiring Newborn Baby Names, Because the World Is Garbage

In the past few weeks, Pokémon Go devotees have inexplicably incorporated the franchise into their eating, dating and even fucking routines. You might wonder, "When will this madness end?"

The answer to that question is never. Because now innocent human babies are being named after Pokémon, according to the name website BabyCenter.com, which has reported a major uptick in Pokébabies this year.

"Parents are always looking to pop culture for baby name inspiration and, right now, it doesn't get hotter than Pokémon Go," BabyCenter global editor in chief Linda Murray said in a press release. "It's possible that parents' enthusiasm for the game will reignite their love for the brand and spark a full-fledged naming trend."

There are more than 700 species of Pokémon, the vast majority of which are extremely weird — for example: Lickitung, Flaaffy, Skiploom — but people seem to be sticking with names that are at least vaguely normal-ish sounding.

According to BabyCenter, the names Roselia, Onyx and Eevee have moved up thousands of spots (5,859, 2,184 and 1,377 respectively) on the most popular girl baby names list in the past year. As for the boys, the name of main character Ash has moved up 284 spots this year.

"We don't think we'll see any babies named Pikachu anytime soon," the press release stated, which is probably for the best.

While this BabyCenter data suggests that the current success of Pokémon Go is to blame for the rise of Pokébabies in 2016, Pokénerds have actually been naming their kids after these Pokémon for years.

According to BabyCenter's database, the name Ash has been gaining popularity since 1996, the year the website started collecting data from its own users and the same year the Pokémon franchise was launched in Japan. The name Eevee first popped up on the list three years later. U.S. data for names like Onyx and Roselia predate the birth of the Pokémon franchise, but Onyx did see an uptick after 1996.

Five years before the launch of Pokémon Go, one mom took to Yahoo! Answers to figure out what she and her husband should name their baby — and they didn't play it quite as safe as all those BabyCenter parents.

"We both really love the first 151 Pokémon and are planning to name her/him after a Pokémon!" she wrote. "We have some preliminary names picked out but are having a tough time deciding... For a girl we have: Psyduck, Venusaur, Caterpie, Jynx and Mew. And for a boy we have: Raichu, Ekans, Scyther and Magmar."

And here's what one commenter had to say to that:

The main thing to remember is that not only will you be calling your child this name... but others will be calling him/her this, too. You need to consider if they will be picked on for being named after a Pokémon and also making sure there aren't any douchebag nicknames that people could call him/her. Just always consider what's best for your child and not for you because it comes down to their life, not yours :) ... Think long-term and not just for your love of Pokémon.

You know what? Your love of Pokémon aside, all things considered this is probably very good advice.