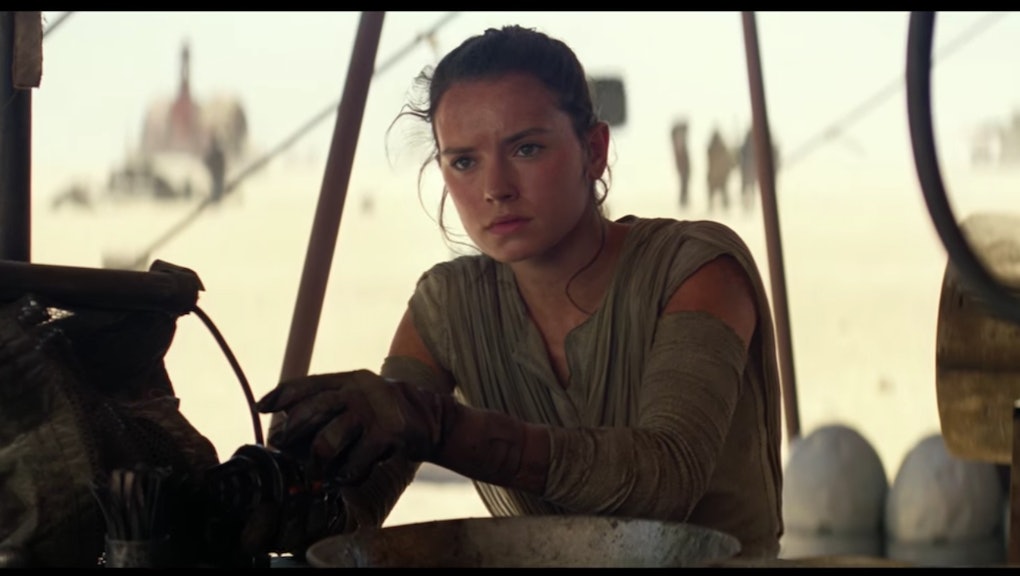 The Force Awakens did more than revitalize the beloved sci-fi franchise when it came out in December. The seventh episode of the Star Wars series sparked a plethora of fan theories about what's to come for both old and new installments (like if Jar Jar Binks was really a Sith Lord).

The most prevalent theories, however, are about The Force Awakens' protagonist, Rey, and the identity of her true parents. It's basically become Star Wars' version of the endless questions surrounding Jon Snow's parentage on Game of Thrones, as the Rey theories generally whittled down to three options: She's either the daughter of Luke Skywalker, Han Solo and Princess Leia or the granddaughter of Obi-Wan Kenobi.

But one fan theory posits we've been looking at the wrong side of the Force. In a post on Medium, chef and food writer J. Kenji López-Alt explains his theory that Rey is actually the granddaughter of Emperor Palpatine. There is some compelling evidence that — at the very least — makes it more probable than Darth Jar Jar.

Here are some of the biggest takeaways from the theory, also broken down in a video by YouTube user Vincent Vendetta.

Her name could be a clue. Star Wars has consistently been on the nose with the names of its characters, which have been telling clues in the past. Most notably, "Vader" was a play on the word father in German, so Darth Vader's name plainly hint that he's a father — the kind of Easter egg that would've likely sparked Reddit theories about his role in Star Wars if the internet existed in the '70s.

With Rey, the translation could be a similarly simple clue, according to the theory: Rey means "king" in Spanish, which itself comes from the Latin word "rex." Palpatine was an emperor, not a king — but the monarchy symbolism applies to both.

Rey was tempted by the Dark Side, according to The Force Awakens' script. It didn't translate well on-screen, but Rey's lightsaber battle with Kylo Ren had her character struggling internally with how to channel her newfound power. Per the novelization of The Force Awakens, a voice inside her head is urging her to kill Kylo Ren, but she stops herself from being tempted by the Dark Side.

Many interpret that voice to be Kylo Ren's mysterious master, Supreme Leader Snoke. However, it could've been Palpatine urging his bloodline to finish what he started.

It follows a repeated cycle of conflict in Star Wars between Palpatine and Skywalkers. The theory notes the first six Star Wars films consistently pitted a Skywalker against, or alongside, Palpatine. Anakin was tempted, and eventually turned, to the Dark Side by Palpatine — a dynamic that slowly played out in the prequel trilogy. Conversely, Luke tried to save his father from the Dark Side in the original trilogy, with Palpatine representing Vader's darkest tendencies as his master.

The Force Awakens, then, would turn this concept on its head. This time a Palpatine (Rey) would be fighting against a Skywalker (Kylo Ren, who is Leia's son), but now Palpatine's granddaughter is fighting as a Jedi. Considering the gripes from certain fans and critics who saw The Force Awakens as too similar to A New Hope, it'd be a great way to alter the narrative.

A huge problem with theory: Palpatine was dead before she was born. The theory mentions this briefly as a counterargument, but it really does deserve consideration. Palpatine was killed at the end of Return of the Jedi, 11 years before Rey was born. It would require a great deal of familial backstory for Palpatine, which is highly unlikely given his one-dimensional villainy in the original trilogy.

Even his faux persona as a friendly senator in the prequels never hinted at the character having a family, and that's just the first step: Rey would be his granddaughter, meaning there's more members of the Palpatine family tree we may never even get a chance to see on-screen.