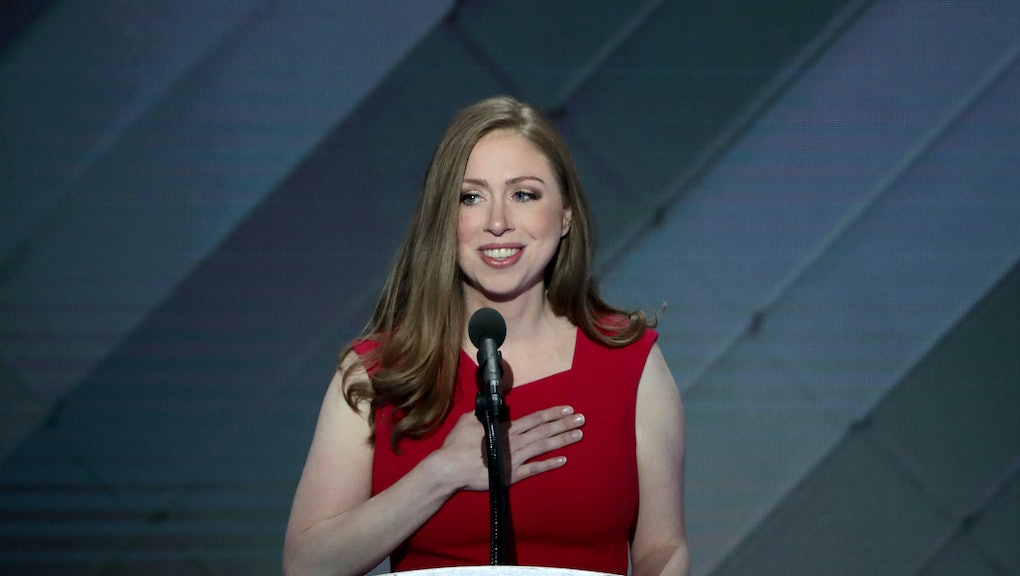 When Chelsea Clinton, the daughter of Democratic presidential nominee Hillary Clinton, took the stage at the Democratic National Convention in Philadelphia on Thursday night, she delivered a moving speech that painted her mother as big-hearted, patient and scholarly, driving home the fact that reading played a big role in the former first daughter's upbringing.

"My earliest memory is my mom picking me up after I'd fallen down, giving me a big hug, and reading me Goodnight Moon," Clinton said.

Later in her speech, she relayed another literary anecdote about talking to her mother incessantly for a week straight "about a book that had captured my imagination, A Wrinkle in Time."

Since the speech, one journalist couldn't help but notice that, apparently, people are snapping up copies of A Wrinkle in Time, Madeleine L'Engle's science-fiction classic, at much higher rates than before.

When I checked Amazon's sales stats for the two books just after Clinton mentioned them, 'Goodnight Moon' was at No. 55 on the site's best-seller lists while 'A Wrinkle in Time' came in at No. 376. Since Amazon updates its public-facing comparative sales stats hourly, it's not clear whether interest in the books spiked immediately. When I looked at the books again 12 hours later, their position had changed dramatically in the case of Madeleine L'Engle's classic young adult novel.* In the intervening time, 'A Wrinkle in Time' had vaulted into the site's Top 100 books list, landing at No. 85. 'Goodnight Moon,' meanwhile, had climbed into the Top 50, where it currently resides at No. 43.

While it's a relatively innocuous detail to take away from the four day long DNC, one interesting thing to note is that sales of the book have rocketed it past Amazon's No. 356 seller — Republican nominee Donald Trump's The Art of the Deal, which made headlines recently when the book's ghostwriter, Tony Schwartz, told the New Yorker he regrets having written the book, and called the candidate a "sociopath."