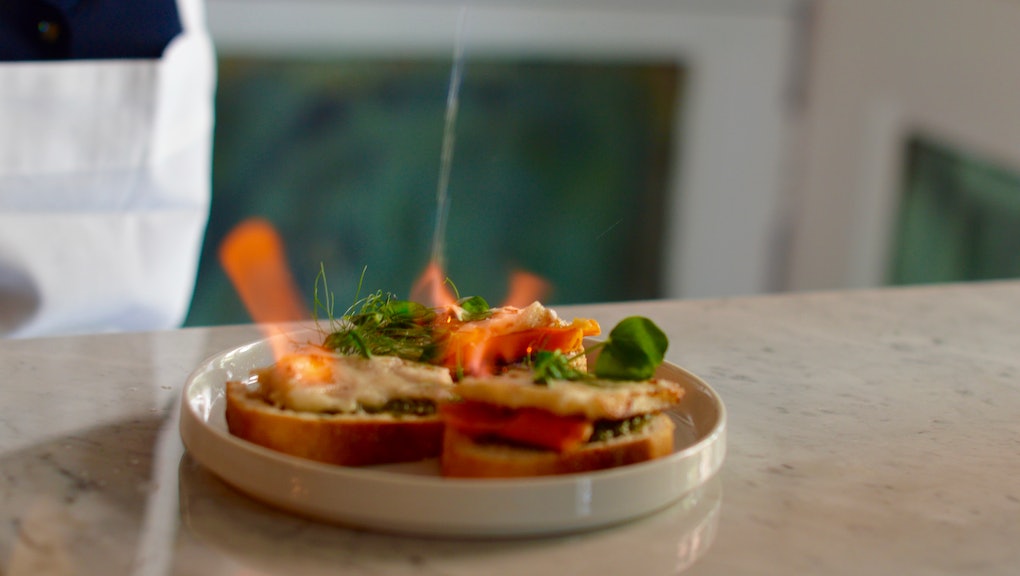 Eat Saganaki, the Flaming Cheese Appetizer That Is Literally Lit

Fiery cocktails and flaming hibachi onion volcanos delight the eyes and the palate; food becomes objectively more entertaining when it's set aflame. Combine fire with cheese and you'll have one of the most addictive plates around. In Greece, this magical combination is served as an appetizer called saganaki.

Saganaki is simply a grilled brick of stretchy cheese, like halloumi or kasseri that is grilled. To complete the dish, the cheese gets doused with booze that is set aflame, the Los Angeles Times wrote.

In order for the cheese to achieve its crispy exterior, it is usually dredged in flour before being pan-fried. At plant-based New York City restaurant Ladybird, Chef Daphne Cheng, makes saganaki from a soy cheese that she coats in rice flour before grilling it up. She then places the cheese on a small slice of bread that is layered with carrot top pesto and smoked carrot ribbon.

The dish is then set to fire table-side. Cheng said she lights a shot of brandy on fire and then pours it over the cheese toasts. "It's like pouring liquid fire, which is always fun to see," she said. The fire isn't just eye candy, but it adds a lot of flavor, Cheng said.  "It imparts this great toasty, charred, smoky finish to the dish."

While technically any flammable spirit can be used to flambé the cheese, cooks typically stick to either ouzo or brandy, Cheng said. "We like to use a pear brandy because of the slight sweetness it imparts in the dish when the alcohol burns off. It really rounds everything out." The flames are either left to die out or they are put out with a squeeze of fresh lemon juice.

While Cheng serves the grilled cheese on slices of bread, a number of other restaurant serve saganaki with a pile of warm pita bread on the side, the Los Angeles Times wrote. The golden, bubbly cheese is also stellar on its own. If you find yourself ordering saganaki after saganaki and just can't stop, chalk it up to science:  Researchers say that cheese really might have addictive properties.