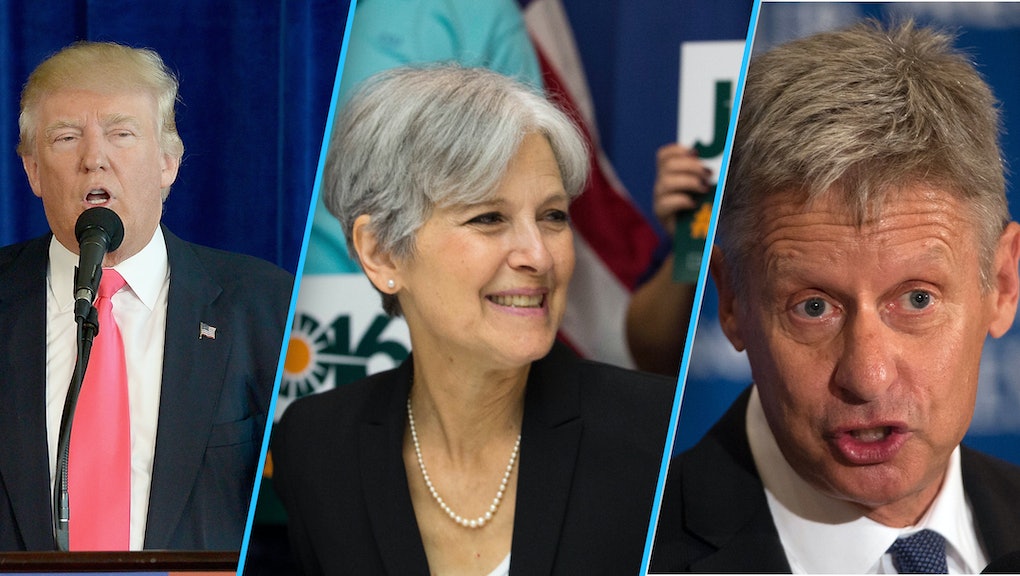 Why is Clinton the Only Presidential Candidate Who Isn't Pandering to Anti-Vaxxers?

There is no medical evidence that links the ingredients in vaccines to autism. Period. Full stop.

Though the causes of autism itself remain shrouded in mystery, the belief that vaccinations play a role in its incidence, despite being widespread, is demonstrably false.

But in spite of this, three out of the four people running for president in 2016 — Donald Trump of the Republican party, Dr. Jill Stein of the Green Party and Gary Johnson of the Libertarian party — have alluded to the fact that they buy into the bunk science.

Stein, an actual licensed medical doctor, gave an interview to the Washington Post on Friday in which she said that concerns about the role that corporate interests play in pharmaceutical companies' approval of vaccines warranted skepticism about them — language that, the Post notes, is common among the anti-vaxxer crowd.

"As a medical doctor, there was a time where I looked very closely at those issues, and not all those issues were completely resolved," she said. "There were concerns among physicians about what the vaccination schedule meant [and] the toxic substances like mercury, which used to be rampant in vaccines. There were real questions that needed to be addressed. I think some of them at least have been addressed. I don't know if all of them have been addressed."

Johnson, for his part, was openly disavowing mandatory vaccinations on Twitter as recently as 2011.

In the case of Trump — the champion of the birther movement, who believes that climate change is a hoax engineered by the Chinese in order to make U.S. manufacturing less competitive — the disavowal of vaccines is also quite real, albeit less surprising.

During the second Republican primary debate in September of 2015, Trump cautioned against mandatory vaccinations, despite a proclamation the very same night by his Republican opponent, Dr. Ben Carson, that there was no correlation between vaccines and autism.

Autism has become an epidemic. Twenty-five years ago, 35 years ago, you look at the statistics, not even close. It has gotten totally out of control," Trump said. "I am totally in favor of vaccines. But I want smaller doses over a longer period of time. Same exact amount, but you take this little beautiful baby, and you pump—I mean, it looks just like it's meant for a horse, not for a child, and we've had so many instances, people that work for me.

Trump also added that he knew of a child "2 years old, 2 1/2 years old, a child, a beautiful child went to have the vaccine, and came back, and a week later got a tremendous fever, got very, very sick, now is autistic," but did not elaborate on who that child was.

Only Democratic nominee Hillary Clinton has offered her unequivocal support for mandatory vaccinations.

If candidates continue to use vaccines as a tool for politicized fear mongering, there will be more than just an election at stake — it could place the public's health at risk, too.