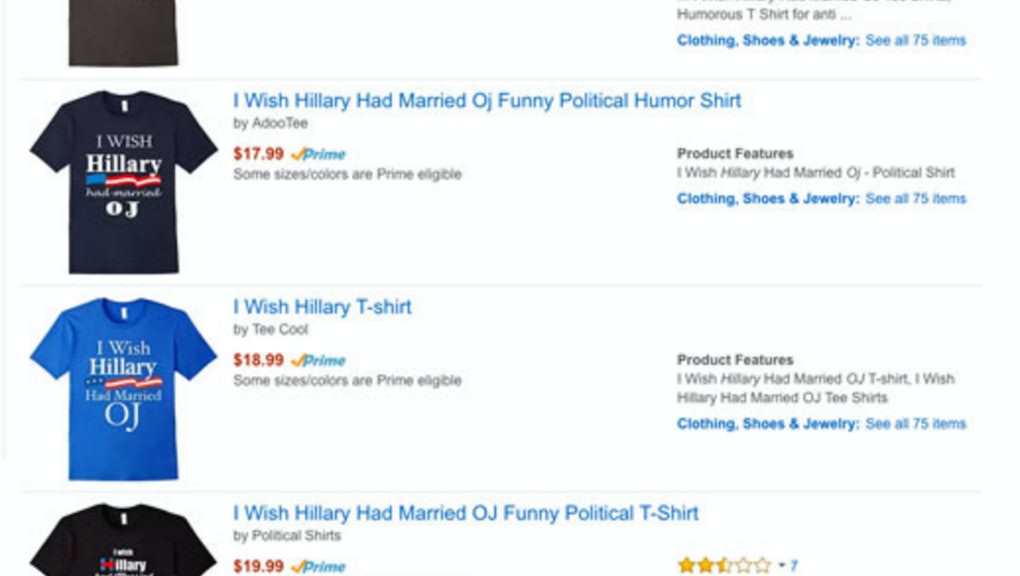 Most people probably agree that t-shirts with writing on them went out of style around the same time that Hot Topic did — but this shirt proves that sexism and violence against women is always en vogue.

The Daily Dot reported on Friday that several outlets on Amazon were selling t-shirts bearing the phrase, "I wish Hillary had married OJ." "OJ" is shorthand for Orenthal James Simpson, or O.J. Simpson, the famed footballer who was notoriously acquitted of murdering his wife in criminal court, though he was later found liable for her death and had to pay his wife's family $33.5 million.

People are not amused by the shirts, which basically let the wearer say, "I support murdering women!" right on their chest.

However, as of Saturday afternoon, the page displaying the shirts had been taken down.

The page's demise was only after The Daily Dot captured screenshots of some satisfied customers' reviews.

"My husband loves this shirt!" one reviewer said of the shirt, whose husband wears it in public — because calling for a woman's murder in public is funny!

"Hillary is a disgusting individual," wrote another person who ordered a shirt asking for someone to be killed.

Sure, sexism is expected online — especially aimed at Hillary Clinton, but there's something about the normalization of murdering women that's particularly chilling. We're not talking about people selling sexist swag at the Republican National Convention, blasting her for a $12,000 Armani jacket or quibbling over whether she wore an American flag pin. It's not even calling for her to go to prison.

It's a shirt asking that she be the victim of heinous violence ending in the loss of her life and that her killer go scot-free.

Talk about a statement piece.