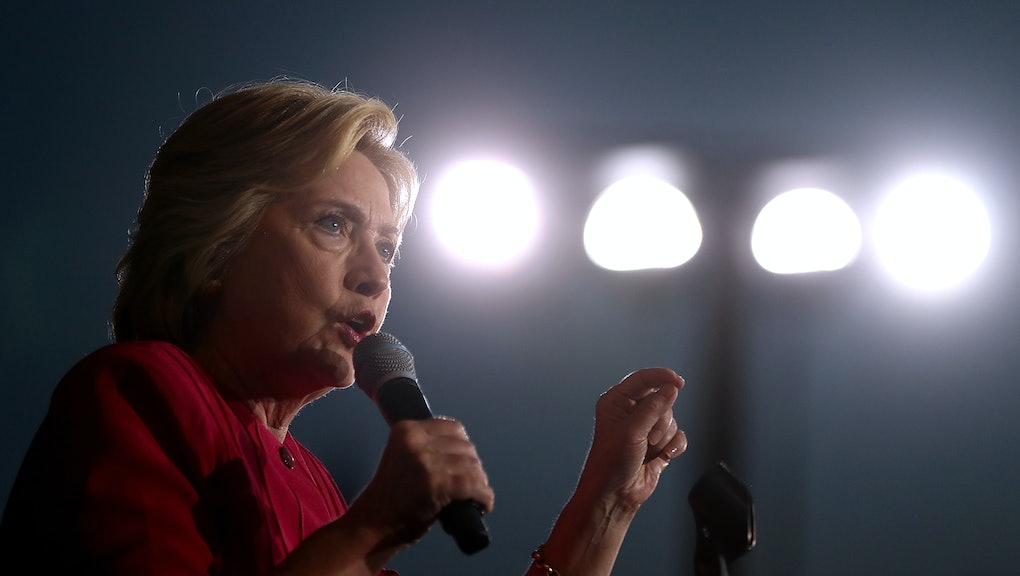 While most candidates undergo a post-convention boost in the polls, the RABA Research poll shows a particularly large bounce for Clinton that will need to be confirmed by subsequent polling.

But a particularly large bump for Clinton is not out of the question, seeing as speakers at her convention included President Barack Obama, former President Bill Clinton and a number of other high-profile figures, while the reception to Trump's RNC — which was avoided by many Republican Party leaders — was somewhat more mixed.

Another Reuters/Ipsos poll released on Friday found Clinton leads by six points nationally, whch is probably too close for comfort.

Whether either candidate's post-convention bump translates to real gains is an open question. An average of polls kept by Real Clear Politics, for example, shows the two candidates neck and neck among voters at 43.7% for Clinton and 43.4% for Trump. Polling site FiveThirtyEight, which just one month ago gave Trump a 20% chance of victory, now has the two candidates in a dead heat in their Nov. 8 forecast.

Another open question is whether polling data is worth the weight traditionally assigned to it in an election season, which, so far, has seemed to buck all the rules. As Quartz's Sarah Kendzior wrote earlier this week, "Polls are not forecasts of the future. They are snapshots of the moment, reflecting current events and the emotional reaction of respondents at that time ... In a fast-paced news cycle, amid a fast-changing election, polls taken months in advance are practically useless as predictors."

One example of that, Kendzior wrote, is Trump's new "law and order candidate" persona, to which the candidate has pivoted in the space of just a few weeks to capitalize on a wave of terror attacks and mass shootings across the U.S.

Within a few weeks, however, as the race enters its general election phase in earnest, polling should at the very least answer a few broad questions more clearly — such as how close this race really is, and how much the Clinton camp should worry.